Randle not giving up on S5000 title hopes

Randle not giving up on S5000 title hopes Thomas Randle believes he is still well within contention to win the VHT S5000 Australian Drivers’ Championship despite a torrid time out in the penultimate round, at Sandown.

The BRM driver started the weekend six points up on Tim Macrow atop the standings but now trails team-mate Joey Mawson by 40 points ahead of the Sydney Motorsport Park event at the start of May.

Randle’s Sunday at Sandown saw him an innocent victim of opening lap incidents in both of the heat races before he spun on his own in the feature.

With just a four-round season ahead due to the switch to a summer calendar from 2021/22, there is little time for the 24-year-old to recover ground.

“There’s 130 points up for grabs so I’ve just got to go in there with the target of winning all the races, that’s all I can really do,” Randle told Speedcafe.com.

“I’ve won championships from this far back before and I know I can do it; I’ve just got to do it.

“I know I’ve got the car to do it and the team. The Castrol/Form 700/Alabar S5000 is quick, we’ve won in it before, we won the feature race at Tassie…

“I’ve got to get back to that form and put the last round out of my mind, and focus on how I can maximise the car and make sure I do everything right to get maximum points.

“I can’t control what happens to Joey. It’s such a short season that one bad race is very costly; he’s been doing a stellar job and I’ve just got to do a better job.”

Randle was caught up in the particularly messy start to Heat 1, when the field was sent for a racing lap that should have been a formation lap, and ended up in a fence due to the damage he incurred in that kerfuffle.

He was turned around in a not unusual Turn 2/Turn 3 concertina when Heat 2 got underway before driving back to third by the finish, then spun again in the Main Event and was sixth at the chequered flag. 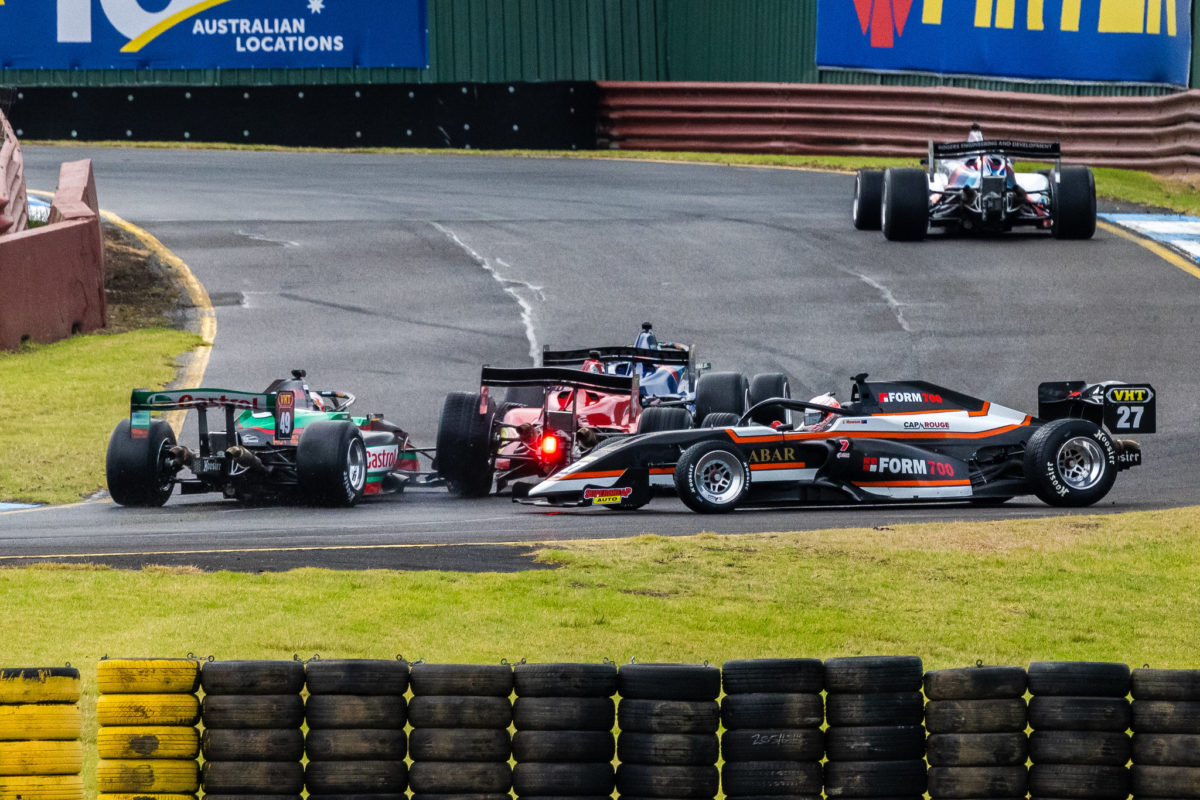 Randle cops damage in contact with Kaleb Ngatoa as they try to avoid team-mate Joey Mawson on what should have been the Heat 1 formation lap. Picture: Australian Racing Group

“Sunday was sort of just a culmination of all sorts of dramas and issues,” recalled Randle.

“The first race was an interesting one, to say the least. It didn’t last very long for me but it kind of feels weird to say that I crashed out on what was the formation lap, so that was a bit of an interesting experience but worse things have happened.

“The day didn’t really get much better from there. In the second race, got turned around at the start, which was just sort of a bit of a concertina effect and recovered from last to third.

“Then I kind of just topped the day off with my spin in the final race, which was complete driver error, and unfortunately that’s the race where it’s double points, so I really didn’t help my championship cause there.

“I was pretty gutted and apologised to the team, and I was disappointed in myself, but these things happens and when you’re racing on the edge, sometimes you go over the edge.

“I’ve never spun in a race car so many times in one day so [it was] just one of those days.”

Randle followed that up with a ride day at Sandown, during which he took young patients from the Peter MacCallum Cancer Centre, where he received treatment for testicular cancer, for hot laps.

“After doing that with all of them, I pretty much erased Sunday from my memory,” he added.

“It was just such a good day and it really just put everything into perspective, and a bad day at the race track is still a very good day.

“Sometimes we can forget how lucky or privileged we are that we get to do what we love, and it just so happened that I lost a lot of valuable championship points, but in the grand scheme of things, it’s not the end of the world.

“We’ll just head into Sydney with the form that I know I’ve got, and just try to get some race wins.”

Randle was also forgiving of the procedural mistake which led to the confusing proceedings at the start of Heat 1, and which Motorsport Australia has taken steps to address.

“We all make mistakes, just like me – I spun, I made the mistake in the last race – and as long as those issues get rectified, that’s really all they can do,” he noted.

“It’s not often that they make that sort of error, so we’ve just got to make it not happen again.”

Round 4 of S5000 takes place on the Shannons Motorsport Australia Championships bill on April 30-May 2.