The McLaren MCL35M is a small evolution of the team’s 2020 Formula 1 challenger, the MCL35, according to Lando Norris.

Norris and Daniel Ricciardo showed well during pre-season testing with the MCL35M running faultlessly through the three days in Bahrain two weeks ago.

That came despite limited development opportunities, owing to the the 2021 regulations and what it took to fit the Mercedes power unit into the car.

McLaren heads into this year’s championship with a new power unit supplier, having switched to Mercedes from Renault.

There were, however, other developments, most notably a new nose and clever diffuser.

The former was technically introduced last year as a means of sidestepping development rules for this season.

Teams were allowed two tokens with which to make updates, with McLaren having spent both of its on the engine installation.

The new nose would have required a third, had the team not used it in late 2020 in anticipation of the new rules coming into force this year.

At the other end of the car, the team brandishes a unique interpretation of the diffuser regulations.

The vertical strakes in the diffuser have been more tightly restricted for 2021 in an effort to reduce the downforce created by cars.

Those restrictions limit how long, and where, the strakes can be placed. McLaren simply moved the strakes in its design outside of the restricted area, bringing them closer to the centreline of the car. 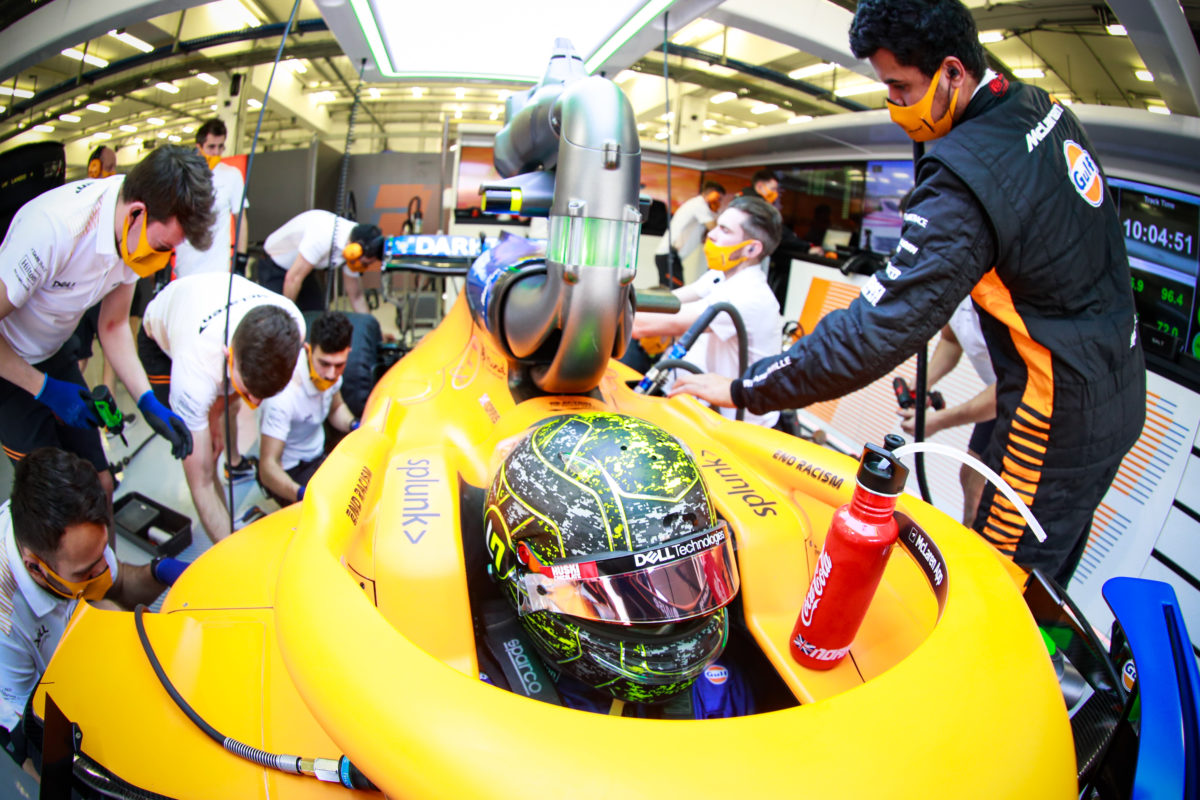 “Obviously a lot of people expect a lot of differences but there isn’t that much,” Norris told Sky Sports when asked about the difference between the new car and last year’s model.

“We had to use a lot of our tokens just to put the Mercedes engine in the back of the cars.

“I mean, it is different and the characteristics have changed, and we’re trying to work on it still as much as possible, but at the end of the day it’s still a [MCL]35, it’s still a very similar car, just a small evolution.”.

Testing suggested McLaren has made something of a step forward, though exactly how accurate that picture is remains clouded.

This weekend’s Bahrain Grand Prix will offer the first glimpse into the 2021 pecking order.

“I’m hoping we’re going to be closer than what we were last year at the same time,” Norris said.

“Everyone always says we have to wait and see, you don’t know what everyone’s like in pre-season testing, but obviously it’s going to be Mercedes and Red Bull leading the way at the moment.

“Mercedes might have looked like they had a difficult pre-season test than in previously years, but if there’s any team from the past five, six, seven years that you expect to put it all together and show that they can win races, it’s Mercedes.”

McLaren last year found itself embroiled in a three-way battle for third in the constructors’ championship with Renault (now Alpine) and Racing Point (now Aston Martin).

That gaggle of teams is thought to have condensed this year, with AlphaTauri, Alfa Romeo, Ferrari, and even Williams looking as though they’ve all made gains.

“You know, we’re not a midfield pack anymore, there’s a lot of teams involved,” Norris explained.

“Williams have caught up as well, Alfa Romeo seem pretty good in the pre-season test, and then you’ve just got us, Renault, AlphaTauri, Ferrari I’m sure are going to be back in it too and looked pretty strong.

“I’m hoping there’s going to be some races along the way where we can really bring it to the front two teams at the moment, Mercedes and Red Bull,” he contineud.

“It’s going to be tough but at the same time it’s probably going to make a very exciting season.”

The 2021 Formula 1 season begins tonight when Free Practice 1 for the Bahrain Grand Prix gets underway at 22:30 AEDT.