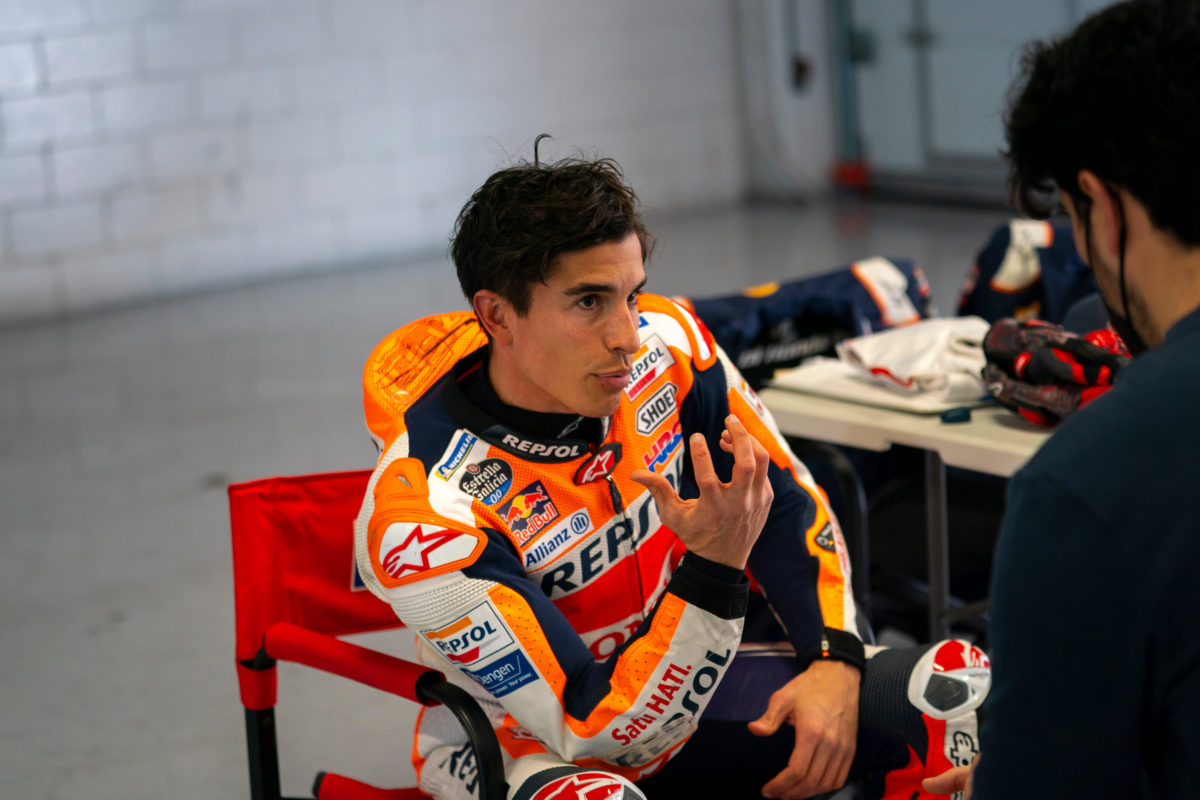 Marc Marquez will miss this weekend’s MotoGP opener and the second round in Qatar on the following weekend due to his humerus injury.

The six-time premier class world champion was ruled out of pre-season testing, which took place earlier this month, but had left open the possibility of competing in the Qatar and Doha Grands Prix.

Following his latest medical check, however, the decision has been made that he will not be in action for those rounds, both of which take place at Losail.

“Marc Marquez, together with his medical team from the Hospital Ruber Internacional, have considered it prudent not to re-join competition this weekend in Qatar,” read a statement from Honda Racing Corporation.

“In the review carried out on the Spanish rider by the medical team led by Doctors Samuel Antuña and Ignacio Roger de Oña, and made up of Doctors De Miguel, Ibarzabal and García Villanueva, 15 weeks after surgery for an infected pseudoarthrosis of the right humerus, a good clinical response has been found after the intensification of his training.

“However, considering the time period and the current state of the bone consolidation process, doctors consider it prudent and necessary not to accelerate Marquez’s return to the track after such an inactive time, and to avoid putting the humerus at risk in intense competition.

“Marquez will undergo another medical check on Monday, April 12.”

Marquez himself was also quoted in that announcement, although it was a tweet from his account which confirmed he would miss both rounds in Qatar.

“After the last check-up with the medical team, they have advised me not to participate in the two Qatar races so we will continue with the recovery to return to compete as soon as possible!” he wrote on social media.

Pending the outcome of the next medical check, Marquez could be on the grid at Portimao when Round 3, the Portuguese Grand Prix, takes place on April 16-18.

There is no official word from Honda on who will replace the 28-year-old, although it is likely to again be test rider Stefan Bradl, who did so for the latter 12 rounds of 2020.

Marquez broke his right humerus when he crashed out of last year’s opening race, the Spanish Grand Prix in July, and underwent surgery in the following days.

He nevertheless entered the Andalucia Grand Prix, at the same Jerez circuit, on the following weekend but pulled out after qualifying.

A second operation was required in August when he broke the titanium plate in that arm, ostensibly by opening a door/window at home, and sat out the remainder of the season.

Marquez had surgery a third time in December due to pseudarthrosis (false joint) and an infection which he had picked up in the arm.

In recent weeks, he has ridden a road version of the RC213V at Barcelona-Catalunya and Portimao, but the MotoGP bike itself will have to wait at least until the field descends on the latter circuit again.

Practice at Losail for Round 1 starts late Friday night (AEDT).