Van Gisbergen to race with collarbone plate for rest of year

Van Gisbergen to race with collarbone plate for rest of year 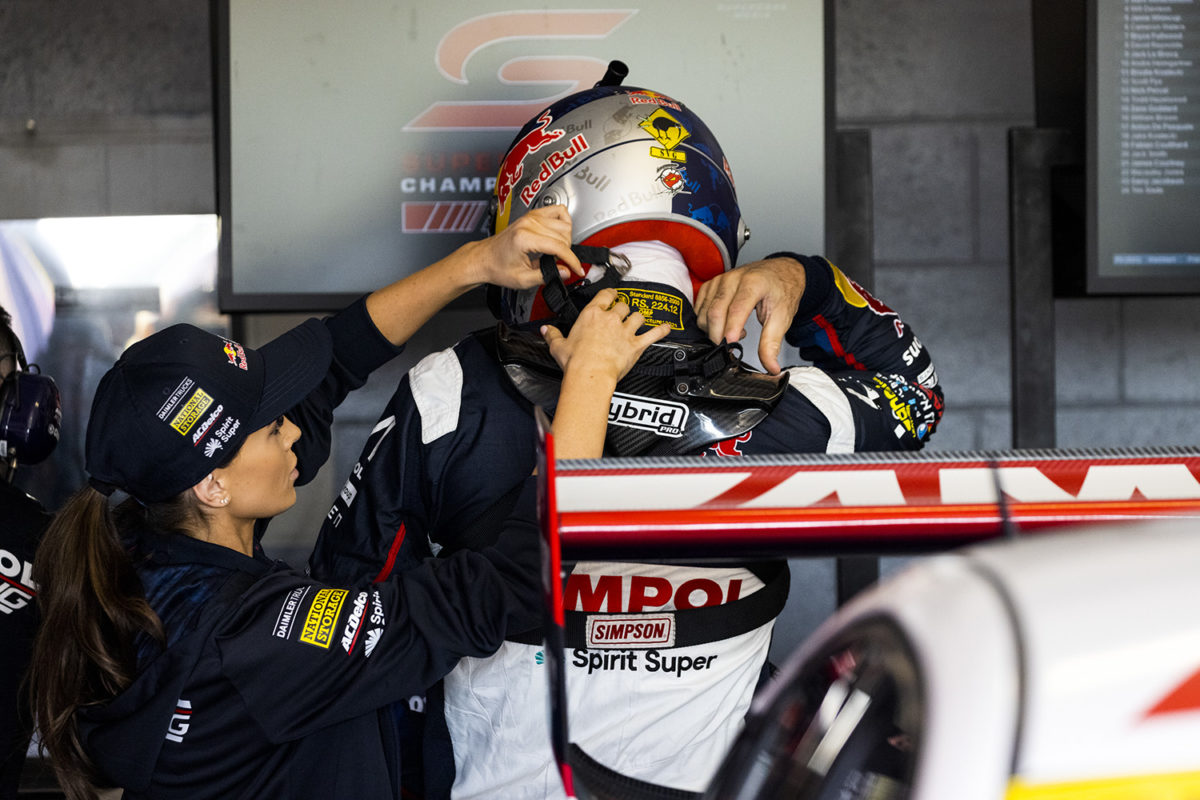 Shane van Gisbergen’s broken left collarbone is set to be held together with a plate for the remainder of year’s Repco Supercars Championship.

Van Gisbergen sustained the injury in a mountain biking crash a fortnight ago, and underwent surgery on the day of the incident.

Despite arriving at the just-completed Penrite Oil Sandown SuperSprint with serious doubts about his fitness, he not only got through all three races, but won them; one from 17th on the grid and the latter two from pole.

That does not mean his collarbone drama is over, however, with the Red Bull Ampol Racing’s championship leader needing to take ongoing care as his recovery continues.

It will in fact be months more before he is completely over the injury, van Gisbergen revealing after the Sandown finale that the plate will stay until the 2021 Supercars season is done.

Asked when the plate will be coming out, he advised, “Probably at the end of the year, the surgeon said.

“But I go see him on Tuesday and [undergo an] x-ray, see if I’ve done any damage, but I feel pretty good.

“Then, just keep recovering; hyperbaric chamber and keep it in the sling, keep the weight off it.

“[I have] got GT in two weekends’ time, so should be ready to go for that again.”

The ‘GT’ reference is to Fanatec GT World Challenge Australia Powered by AWS, in which van Gisbergen was to have contested five of the six rounds this year in Triple Eight Race Engineering’s Mercedes-AMG.

The first of those took place on the weekend after the mountain bike stack, when Jamie Whincup was instead slotted into the GT3, and the next is scheduled for April 2-4 at Mount Panorama.

That event is the Hi-Tec Oils Bathurst 6 Hour, where the New Zealander was also set to race a BMW M4 which would give him a shot at outright victory in the headline act.

Questioned as to whether there is a chance he will sit out the Easter meeting, van Gisbergen said, “I’d love to do it, and the production car race on the same weekend.

“I think I’m in a competitive car for both of them, so I’d love to be there.”

The 31-year-old surprised many in managing to not only survive Sandown, a venue likened to a street circuit for features such as its bumps and the jarring Turn 2/Turn 3 complex, but thrive.

Van Gisbergen admitted that he “just didn’t know” if he would be able to drive his ZB Commodore before he attempted to do so, but being able to cope with the aforementioned kerbs on his first lap out in practice was the litmus test.

However, the ligament damage is a source of grief on a day-to-day basis.

“I wrecked the AC joint [Acromioclavicular, top of shoulder] a bit and tore a bunch of ligaments off, so my ligament’s held onto the plate by a rope,” he explained.

“That was probably the most painful part, so on Tuesday I couldn’t lift further and each day it got better and better.

“I think the bone’s okay because it’s literally bolted together but it’s all the ligaments and stuff I ripped apart, which hurts. Like, the whole side of me was pretty black.” 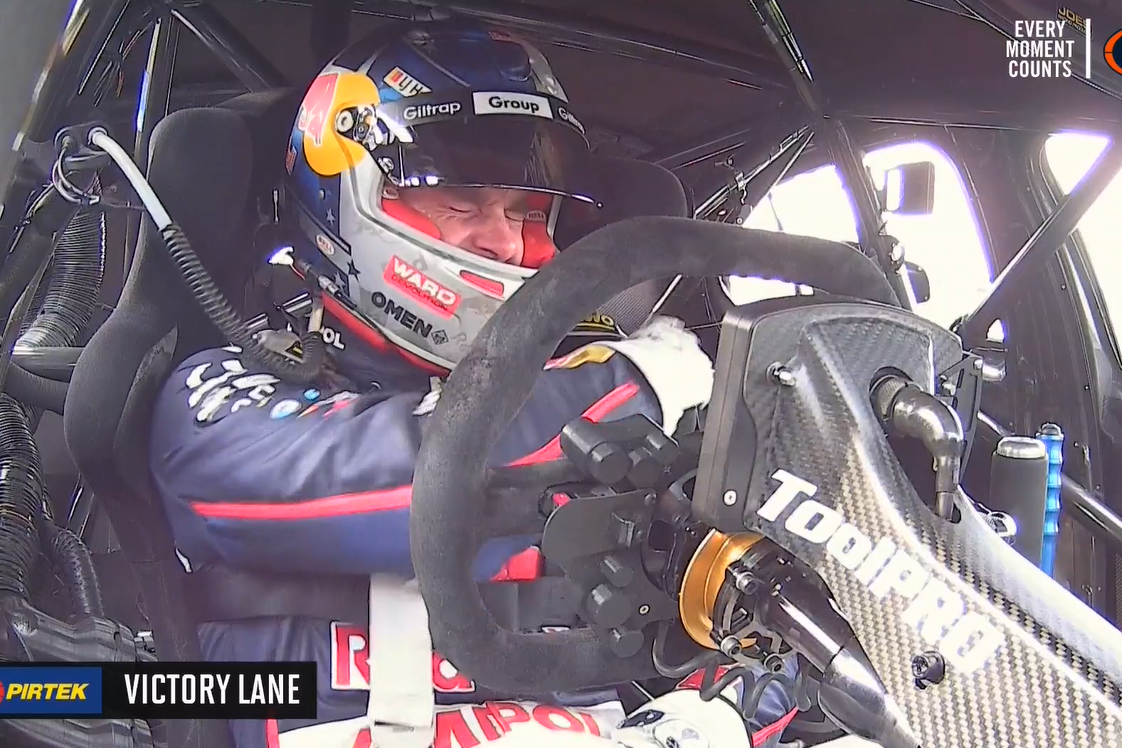 van Gisbergen winces as he exits his car after Race 3. Picture: Fox Sports

The 2020 Bathurst 1000 winner was nevertheless in obvious pain as he exited Car #97 after his astonishing comeback in Race 3, the Saturday encounter at Sandown (pictured above).

Van Gisbergen said there was no special overnight remedy to prevent a repeat, but rather just a little more care in clambering out of the cockpit.

“I probably undid and tried to get out with my left hand too much, not even thinking, and then [on Sunday] just learnt to just use one hand,” he recalled.

“[If] I put weight on it on a funny angle, it hurts me, so I just got out a bit better.

“And I’m glad I didn’t have to do the seven-second test [mandatory cockpit exit time] or whatever to get out. I would have been able to do it, but it would have hurt.”

As to whether or not his mountain biking days are done, van Gisbergen quipped that he would continue to have fun on two wheels.

“No,” he stated bluntly.

“You can’t be scared and wrap yourself in cotton wool. These things happen and I just made a mistake.”

Van Gisbergen’s Supercars Championship lead is 150 points, the equivalent already of half an event (save for fastest lap bonus points, where applicable), ahead of the Beaurepaires Tasmania SuperSprint at Symmons Plains on April 10-11. 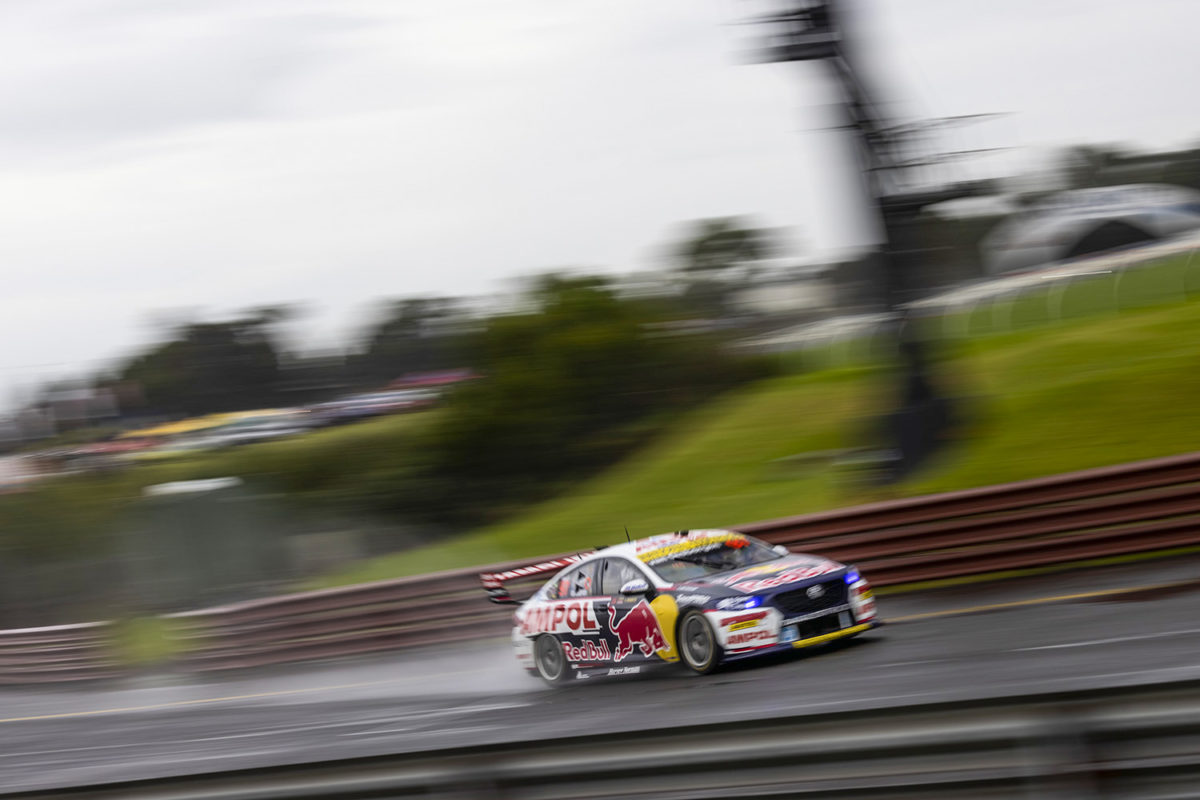 van Gisbergen on his way to another victory at Sandown