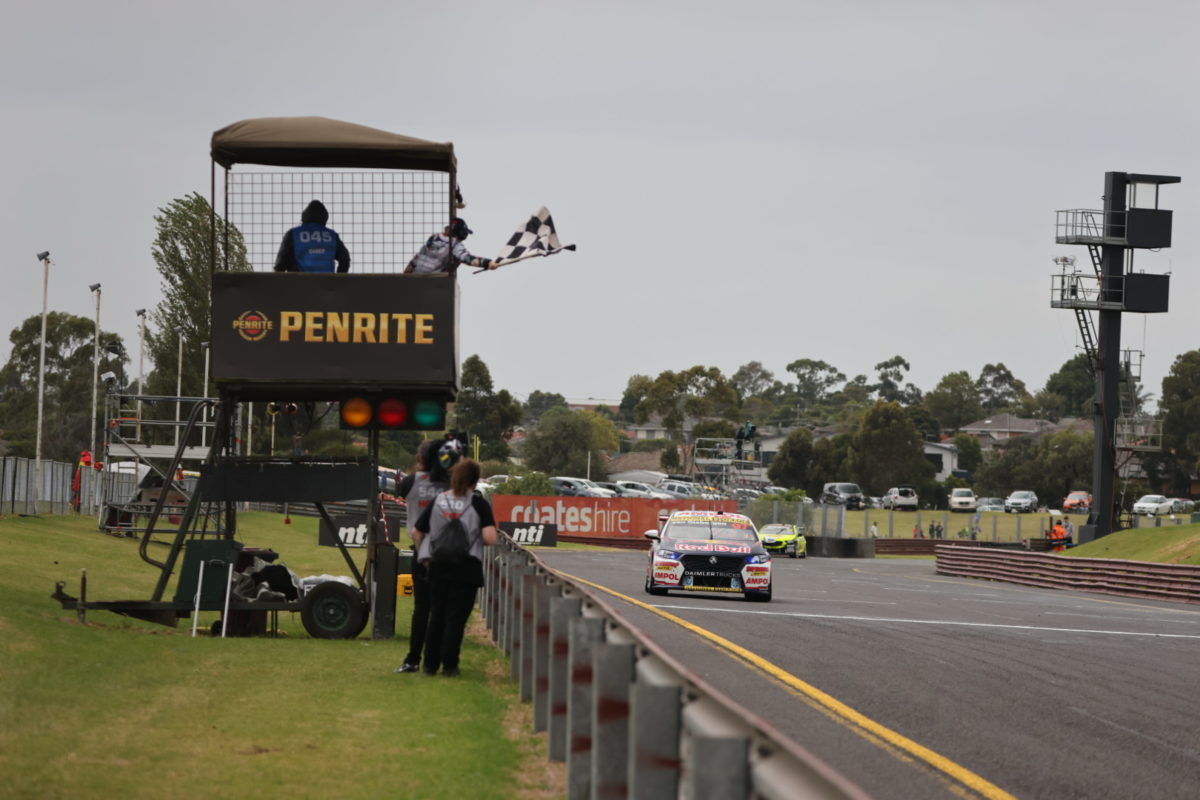 Shane van Gisbergen has won a weather-affected Race 4 at the Penrite Oil Sandown SuperSprint as late drama unfolded behind him in the battle for the minors.

Andre Heimgartner was also involved in the stoush and went on to take the chequered flag in fifth after 36 laps, ahead of Nick Percat, James Courtney, Scott Pye, Tim Slade, and Will Davison.

Waters had emerged in second spot upon completion of the pit stop cycle, which saw everyone switch from wets to slicks as the early-race rain disappeared and the track surface began to dry.

He got as close as around 2.5s behind van Gisbergen (#97 ZB Commodore) with a little under 10 laps to go, but his hopes of victory diminished when Mostert soon began to hound him.

They very nearly hit as they ran up the back straight before matters reached something of a flashpoint when Mostert showed the nose again at Turn 1 on Lap 34.

He nicked the left-hand side of the #6 Monster Energy Mustang and Waters completed a full rotation but managed to catch the spin once he was facing the right way again.

Mostert slowed significantly in an act of redress, but that allowed Heimgartner (#7 Ned Mustang) to charge through at the Turn 2/Turn 3 complex and pinch third position, with Whincup (#88 ZB Commodore) also closing in on the back of the #25 Mobil 1 Appliances Online ZB Commodore.

A lap later, Mostert was having another crack at Turn 1, and while that was somewhat cleaner, he took both himself and Heimgartner wide, creating a big hole for Whincup to drive through.

Van Gisbergen, by then, was 12 seconds up the road from Waters, with Whincup third, Mostert fourth, and Heimgartner fifth, and that was how they finished.

“It was awesome and good battle with Chaz,” said van Gisbergen.

“When the Safety Car came out, we pulled up beside and we both did thumbs up to each; it was pretty cool.

“But once it dried up, my car got better and better.

“He obviously must have had a bit less tyre pressure, which explains why he was so good on the first lap.

Back at the beginning, all 24 drivers were armed with wet tyres as light rain fell over the southeast Melbourne circuit.

Whincup bettered van Gisbergen from the outside of the front row when the lights went out, and swept into the lead when he went the long way around Turn 1.

He held position despite running through the infield upon arrival at Turn 2/Turn 3, but his re-entry crimped van Gisbergen for room and that enabled Mostert to go past and claim second position up the back straight.

Mostert had the lead before the standing lap was out, having also got a run on Whincup when the seven-time champion ran wide at Dandenong Road, and van Gisbergen went underneath his team-mate at the end of the main straight on Lap 2.

Van Gisbergen put a move on the race-leading Walkinshaw Andretti United entry at Turn 11/Turn 12 on Lap 2, and again at Dandenong Road on Lap 3, but could not make either stick, and Mostert emerged still in front when he toured the infield two corners later.

Meanwhile, Waters ran fourth, from Courtney (#44 Boost Mobile Mustang) and Heimgartner, while a number of battles were unfolding behind them.

Mark Winterbottom (#18 Irwin Tools ZB Commodore) had run off at Dandenong Road having not long passed both of the Dick Johnson Racing Mustangs for seventh, and David Reynolds (#26 Penrite Mustang) was sent into a spin, and ultimately to the pits with damage, around the back of the top 10 after Lap 2 contact with Slade (#3 CoolDrive Mustang) at Turn 4.

A ceasefire was called on Lap 4, albeit to recover the #96 Coca-Cola ZB Commodore of Macauley Jones which had developed some sort of engine-related problem, before the restart came for the start of Lap 9.

Mostert carried an advantage of barely more than a tenth of a second in taking the green flag and, possibly having encountered the oil which Jones’ car had deposited, ceded first position to van Gisbergen at the end of the main straight.

Moments later, Whincup dropped behind Waters, Heimgartner, and Courtney, having got caught high on the Turn 4 exit kerb.

Van Gisbergen moved a second clear of the field on Lap 10 while Whincup passed Courtney a lap later, then took fourth back off Heimgartner on Lap 14 as they braked for Turn 1.

Drivers began to look for water as the contest moved towards the halfway mark and, despite van Gisbergen reporting that light rain was returning, Pye (#20 DeWalt ZB Commodore) was first to take his compulsory pit stop and switch to slicks, peeling off from ninth on Lap 19.

Waters and Heimgartner made the change on Lap 20, before van Gisbergen and Mostert, who were separated by 2.07s at the time, did likewise a lap later again.

Mostert got back out ahead of Waters but the latter had the advantage of warm tyres and made a forceful move at Turn 3 as the former battled with cold slicks.

Whincup and Courtney took their service on Lap 22 and the former was overhauled by Heimgartner in the battle for the effective fourth position as he exited the pits.

It was a relatively calm handful of laps which followed, before the aforementioned eruption in activity decided matters.

With the fastest lap bonus on offer for the second time, it was Whincup who picked up the extra five points for a 1:08.8762s on Lap 28.

The final race of Event 2 of the season is scheduled for a start this afternoon at 16:30 local time/AEDT.