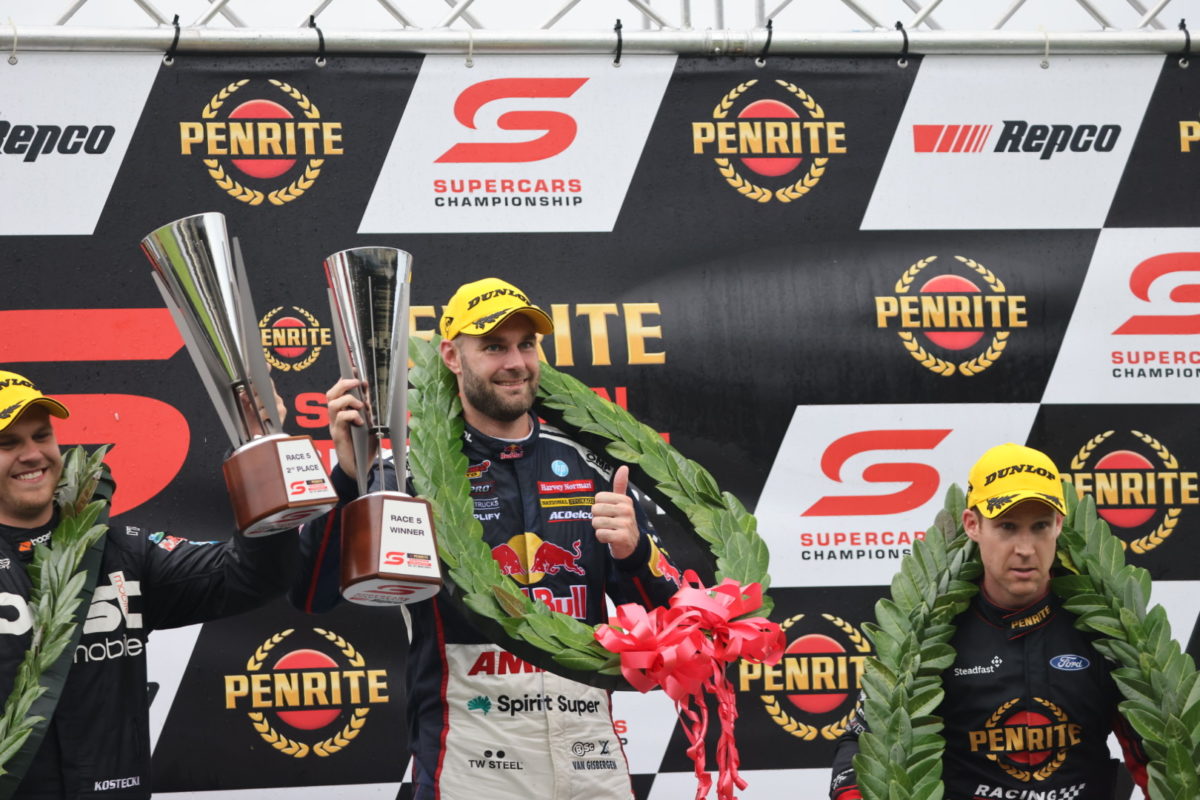 Shane van Gisbergen has completed yet another weekend sweep while Brodie Kostecki finished second in the final race at the Penrite Oil Sandown SuperSprint.

Van Gisbergen, who carried a broken left collarbone into the weekend, is now undefeated in the last six races dating back to last year’s Bathurst 1000 after effectively leading all the way in Race 5 of the 2021 Repco Supercars Championship.

He scooped a total of 105 points from the latest encounter, having set the fastest lap on his final lap, and is now 150 points clear of Triple Eight Race Engineering team-mate Jamie Whincup at the top of the standings.

Kostecki posed something of a threat through the middle third of the wet, 36-lap contest, but started the final lap almost 11 seconds back from the #97 ZB Commodore after an error on his out lap.

It proved to be of little consequence, however, as the Erebus Motorsport driver still took the chequered flag eight seconds clear of David Reynolds, who finished third.

“I’ve got to thank the team so much, the car has been awesome, and helping me through the last few weeks.

“Super cool, awesome to race in front of fans again in Melbourne, thanks for coming out.”

Whincup made it Red Bull Ampol Racing cars first and fourth, with Will Davison fifth, ahead of Cameron Waters, Will Brown, Todd Hazelwood, Nick Percat, and Mark Winterbottom.

Chaz Mostert scrounged a handful of points by making the finish, albeit in 24th position at seven laps down, and dropped a spot to third in the championship.

He had already looked like ceding significant ground relative to van Gisbergen as the #25 Mobil 1 Appliances Online ZB Commodore ran midfield on merit, before suffering a broken throttle cable.

With rain falling over Sandown International Motor Raceway, all 24 drivers started on wets, and that is how they would remain for the duration.

The pole-sitting van Gisbergen got the jump on Whincup (#88 ZB Commodore) when the race got underway, with Reynolds (#26 Penrite Mustang) taking up third and Davison (#17 Shell V-Power Mustang) fourth, while Andre Heimgartner (#7 Ned Mustang) made fifth his own as the field exited the first corner.

Kostecki (#99 Boost Mobile ZB Commodore) took sixth when he went down the inside of Winterbottom (#18 Irwin Tools ZB Commodore) at the fourth corner of the race, then picked off Heimgartner at the start of Lap 2.

Whincup gave up second spot to Reynolds when he went wide at Turn 11 at the end of Lap 2, before Davison rotated between Turns 1 and 2 on Lap 3, dropping to 11th.

That elevated Kostecki to fourth, and he grabbed third off Whincup when he got a better run onto the main straight as they completed Lap 7.

With 10 laps in the books, van Gisbergen had just moved his margin over Reynolds past four seconds, before Kostecki drove past the Kelly Grove Racing entry as they exited Turn 4 on Lap 12.

That released the Erebus pilot to establish himself as the fastest driver on track for a period of time, although traffic also played a significant role in the margin between him and van Gisbergen falling to as low as 3.33s on Lap 22.

It was 4.47s when van Gisbergen pitted four laps later for new wets on the rear of Car #97, putting Kostecki into the official race lead.

The man in Car #99 held top spot until Kostecki peeled off with two laps remaining, rejoining a bit over five seconds behind Car #97 before what would be a minor hiccup when he straight-lined Turn 2/Turn 3.

Reynolds had been into the lane on Lap 31 and ultimately took a lonely third, while Whincup ran fourth, officially or at least effectively, all the way from the time he was passed by Kostecki until the chequered flag.

Davison showed good pace to regain most of what he lost with the early spin, while sixth for Waters (#6 Monster Energy Mustang) was a little better than the Tickford Racing driver looked like getting when he was battling around the back end of the top 10 in the early stages.

Seventh for Brown (#9 Ozland ZB Commodore) was a net gain of 12 positions, while Hazelwood (#14 Cub Cadet ZB Commodore) came from 16th on the grid to eighth and Percat (#8 R&J Batteries ZB Commodore) from 13th to ninth.

Winterbottom (#18 Irwin Tools ZB Commodore) is fifth in the championship, just behind Waters, after finishing 10th, while Heimgartner was 11th all told in Race 5 and Anton De Pasquale (#11 Shell V-Power Mustang) 12th.

The next Supercars Championship event is the Beaurepaires Tasmania SuperSprint at Symmons Plains on April 10-11.