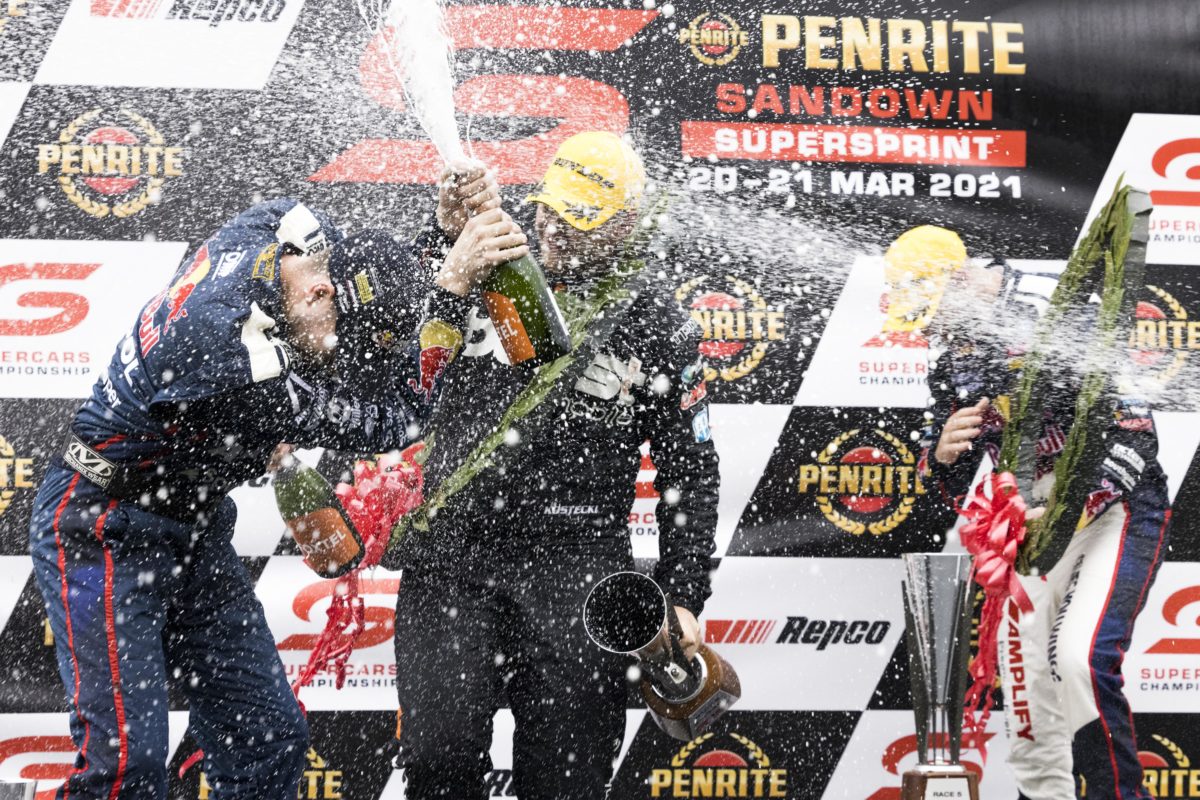 Brodie Kostecki celebrates on the podium alongside Shane van Gisbergen

Erebus Motorsport CEO Barry Ryan believes that Brodie Kostecki’s second placing in Race 5 is “like a win” given the form which winner Shane van Gisbergen is in.

Best of the rest in the rainy conclusion to the Penrite Oil Sandown SuperSprint was Kostecki, who picked up his first podium finish at Championship level after starting seventh in the #99 Boost Mobile ZB Commodore.

It was also a strong performance from team-mate Will Brown, who drove from 19th on the grid to seventh at the chequered flag.

“The biggest thing is, without Brodie’s [performance], Will’s would have looked fantastic,” said Ryan on Supercars Trackside.

“Both of them did an awesome job, but Brodie was the standout, and one of the best drives I’ve seen in the wet.

“Shane’s pretty much in a position [that] he could win every race this year, so to come second to Shane, it’s like a race win.”

Erebus fields what is officially an all-rookie line-up of full-time drivers this year and while Brown has been part of the fold as an enduro co-driver since 2018, Kostecki only made his first start for the squad in last year’s Bathurst 1000.

Ryan suggested that the 23-year-old is repaying the faith which the team has shown in him after a tip from his mentor, Paul Morris.

“It was late-’19 that Paul Morris gave us a nudge and said, ‘You’ve got to look at Brodie, seriously,’ so we did,” recalled Ryan.

“We signed him up pretty much in December ’19 as a co-driver and he’s doing a fantastic job.

“Today he was just getting in the groove and he was just, every sector, within half a tenth.

“I think it’s some of his oval school technique [Late Model racing in United States], that he knows how to do lap after lap after lap without making mistakes.

“Yeah, fantastic job today and I’m proud of him.”

Kostecki is now 10th in the championship while Brown sits 15th on the way to Symmons Plains for Event 3 of the campaign in April.