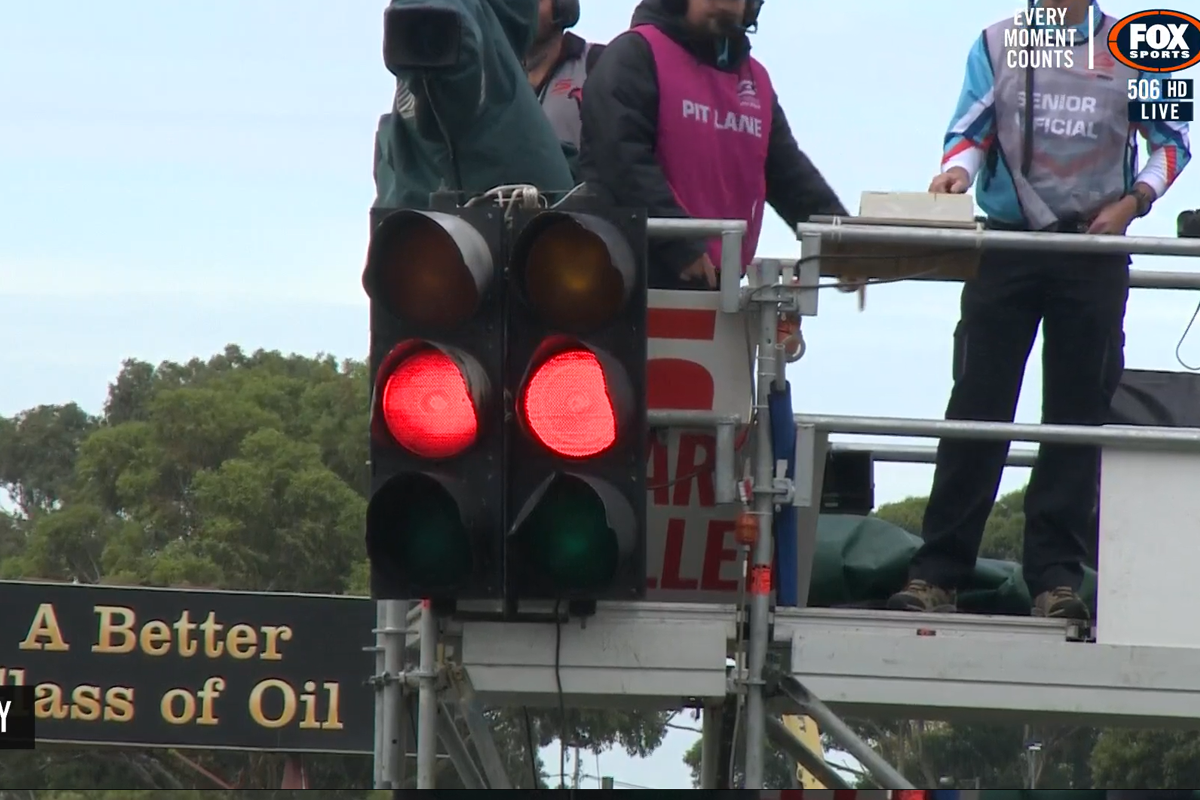 The red lights as displayed on the start gantry. Picture: Fox Sports

James Golding took victory while pre-race championship leader Thomas Randle crashed out of an S5000 heat at Sandown which quickly descended into farce.

Randle copped damage after the field sped away on what was apparently a race start, although timing was not showing the race as having got underway and the formation lap would have ordinarily taken place at that point.

When he unsurprisingly clouted the fence on the back straight with broken steering on that same lap, proceedings were red flagged in order to recover the busted #49 Castrol Team BRM entry.

A start, or possibly a restart, eventually took place under Safety Car conditions with the 10 cars which remained ordered in something of a hybrid between that which had existed at the time of the red flag and the original starting grid.

In the end, Golding led all seven laps which were run after the red flag, while Garry Rogers Motorsport team-mate Nathan Herne claimed second with a late move on Team BRM’s Kaleb Ngatoa.

Earlier, there was confusion when the race, Heat 1 of Round 3, had seemingly begun without the normal formation lap. 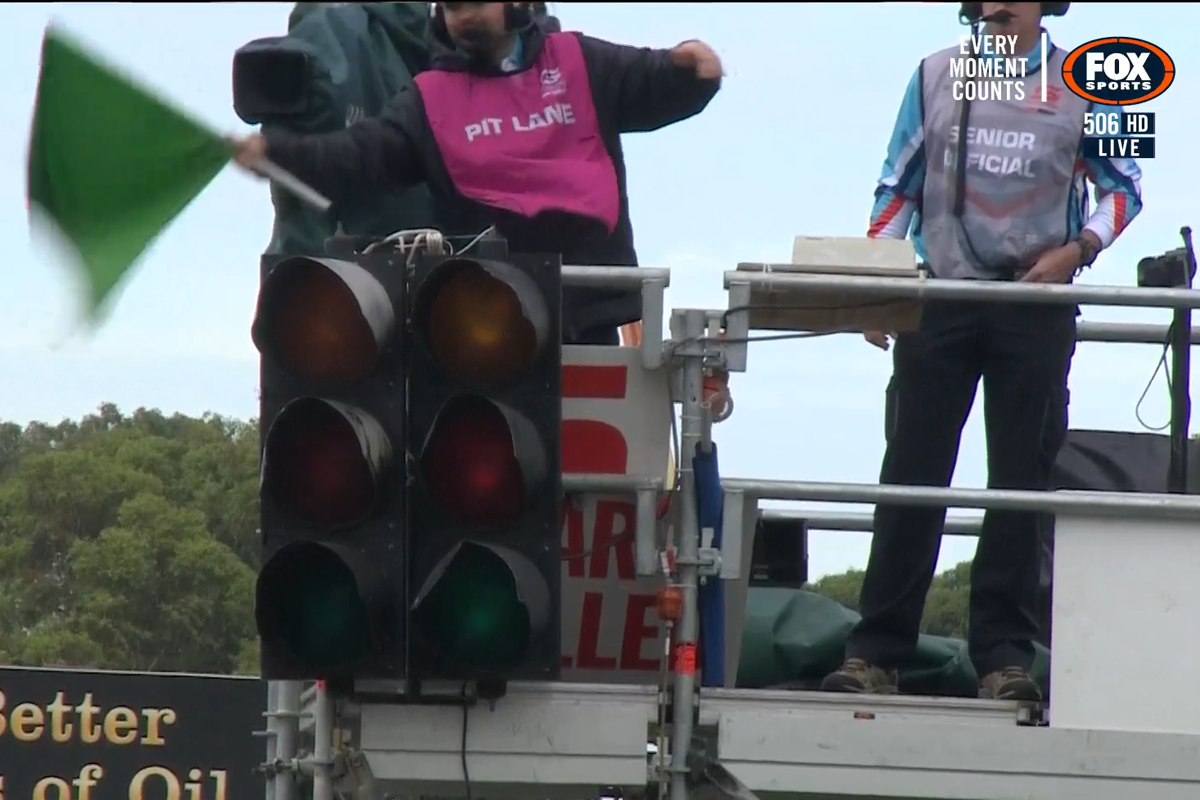 Lights then go out and a green flag is waved. Picture: Fox Sports

Replays showed that the five-second board was displayed on the start gantry, then the red lights illuminated and extinguished, and a marshal subsequently waving a green flag.

It prompted the field to charge off to Turn 1 at racing speed, with Herne leading them through the opening corners having made a good getaway from fourth on the grid.

With the track wet from morning showers, pole-sitter Joey Mawson had started on wets and he tried to round up Golding at the Turn 2/Turn 3 complex, only for contact to see his #27 BRM machine spin.

That was what caught out Randle and fellow BRM steerer Kaleb Ngatoa, the former running into the latter when he moved across to evade Mawson’s stricken car.

Safety Car boards and flags were already on display when Randle went straight on and into the fence at the kink in the back straight, and that was soon elevated to a red flag.

At the time, Herne was still at the head of the field, ahead of Golding and Ngatoa.

All but Randle were able to get back to the pits and Mawson’s crew swapped his wets for slicks, although Ngatoa and Cooper Webster remained on the treaded rubber. 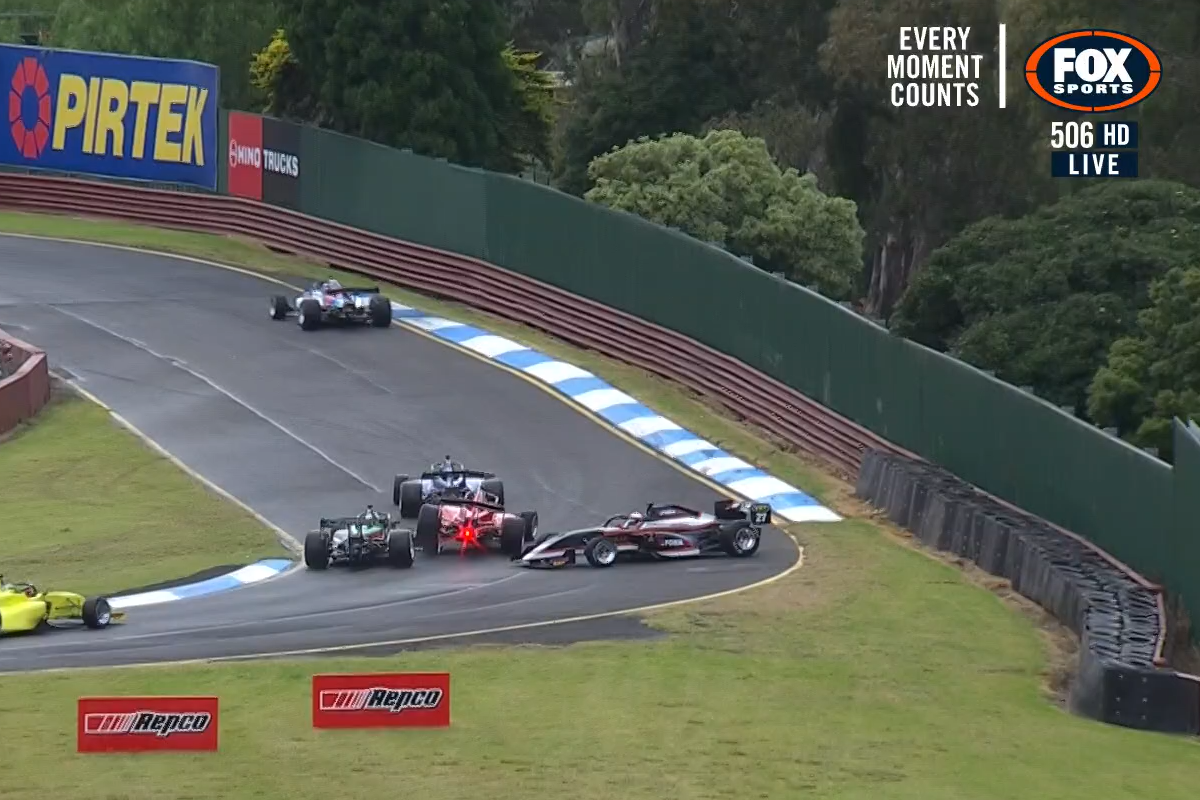 The field was sent back out with the intent that the start/restart be taken from under Safety Car.

Herne was still at the head of the train when that happened, but he and Golding swapped positions as they trailed the Safety Car for two laps out of the pits.

Mawson, however, remained at the very back despite no racing laps having been completed before the halt in proceedings.

Golding led them off, while Webster and Ngatoa quickly made their way from fifth and sixth in the order to second and third respectively, given the early advantage of wets.

Their threat to the race leader diminished, however, as the condition of their tyres deteriorated on a drying track, before Webster threw it away under pressure from Ngatoa at Dandenong Road on Lap 5, beaching Car #88.

Herne caught back up to Ngatoa in the latter stages and made the pass down the back straight on Lap 7, which ended up being the last of the race after 16 were originally scheduled.