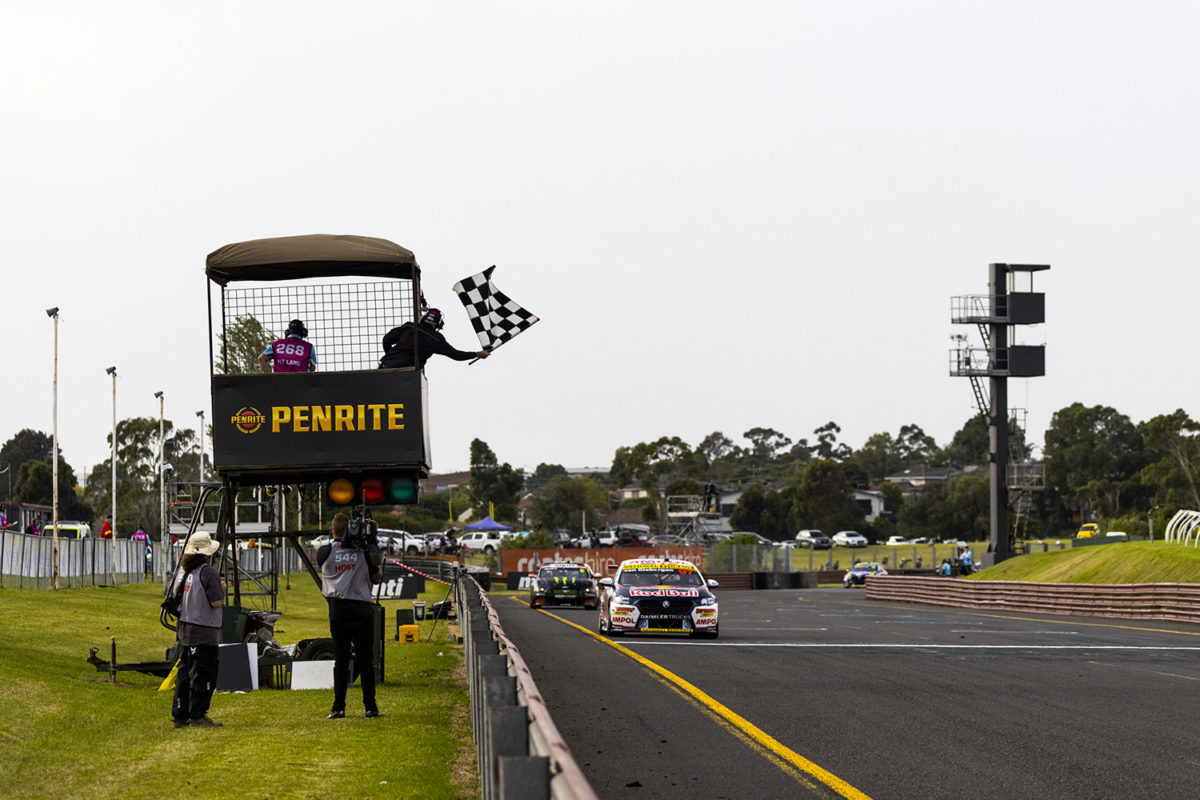 Shane van Gisbergen has hauled his Triple Eight Holden and a broken collarbone from 17th to victory in a Race 3 thriller at the Penrite Oil Sandown SuperSprint.

Van Gisbergen passed eight cars on-track in his opening stint after qualifying on the ninth row, but still had work to do when he emerged sixth at the completion of the pit stop cycle with 10 laps of 36 to go.

As Mostert looked to move Whincup wide at Turn 2 on Lap 34, van Gisbergen, who had not long passed Anton De Pasquale and then Mark Winterbottom, dived down the inside of both of them to take up second spot.

He wasted little time in closing the gap to Waters, who covered at the Turn 11/Turn 12 complex on the penultimate lap, but that left him vulnerable for the drag down the main straight.

Van Gisbergen picked him off as they braked for Turn 1 for the final time, and went on to take a one-second victory in the #97 ZB Commodore.

“I had so much help the last couple of weeks with good surgeons, the hyperbaric chambers, nice girlfriend looking after me and our physio,” he said post-race.

“It’s been a pretty tough two weeks but I feel awesome in the car and obviously my car is great so, yeah, hopefully that was a good show to watch; I was trying.”

Waters ended up second, and Whincup rounded out the podium, while Winterbottom and De Pasquale both got past Mostert near the end to take fourth and fifth respectively.

Mostert greeted the chequered flag in sixth, a loss of five positions in the last three laps, ahead of Nick Percat, Andre Heimgartner, James Courtney, and Jack Le Brocq.

Winterbottom had to file behind on exit, with Whincup (#88 Red Bull Ampol ZB Commodore) a net unchanged third and pole-sitter Mostert (#25 Mobil 1 Appliances Online ZB Commodore) fourth for the run to Turn 2.

Van Gisbergen gained four spots in the opening corners to take up 13th, then got past Todd Hazelwood (#14 Cub Cadet ZB Commodore) at the start of Lap 2.

The Safety Car was called at the end of that lap in order to recover Bryce Fullwood (#2 Mobil 1 Middy’s ZB Commodore) from the Turn 4 tyre barrier after contact with Garry Jacobson (#22 PremiAir Hire ZB Commodore) in a battle for 20th.

A restart came on Lap 7, at which time Mostert showed the nose at Whincup at Dandenong Road but found no way through.

Mostert was taken out of that battle when he was called to pit on Lap 8, the Walkinshaw Andretti United crew giving him fresh rear tyres and clean air with which to exploit them.

The three who had been running ahead of him, however, continued to circulate until just beyond the halfway mark.

Waters had briefly gone a second clear of Winterbottom, just after the restart, but those two and Whincup filed into the lane on Lap 19 with only half a second covering them.

Waters and Whincup both took rears and the latter managed to jump Winterbottom, whose service was relatively slow.

However, Mostert, who set the fastest lap on Lap 10, had blazed past them thanks to the undercut and was 3.8s up on Waters at the end of the lap.

Winterbottom lost another position on re-entry when De Pasquale, who had been through the lane on Lap 9, went by to take over the effective fourth position.

Van Gisbergen, meanwhile, had passed Percat for 11th just after the restart, Le Brocq at Turn 1 on Lap 16, and Davison at the same spot on Lap 19.

He inherited the lead on Lap 20 as the pit stop cycle continued, before peeling off to take rear tyres on Lap 25.

Winterbottom had reclaimed fourth, in effective terms, from De Pasquale as they ran up the back straight on Lap 24, but De Pasquale held on to the effective fifth position when he passed van Gisbergen as #97 exited the pits.

When the cycle completed on Lap 26, Mostert’s lead had been cut to just under two seconds by Waters, while Whincup ran third, followed by Winterbottom, De Pasquale, van Gisbergen, Courtney, Heimgartner, Davison, and Hazelwood.

It took two more laps for van Gisbergen to go underneath De Pasquale, at Turn 1 on Lap 29, while the top three was just about back on top of each other on Lap 31.

Whincup was resisted when he attacked Waters into the Turn 11/Turn 12 complex on Lap 32, but when Waters forced Mostert to go defensive at the same spot on Lap 33, he got a run on Car #25.

He made the move at Turn 1 and Whincup tried to take advantage, which opened the door for van Gisbergen.

Whincup did at least manage to grab a position off Mostert amid the drama, leaving him still in third.

As van Gisbergen continued his charge to an improbable victory, Winterbottom and then De Pasquale passed Mostert in the final two laps, relegating the long-time effective leader to sixth all told.

In small consolation, the WAU driver did at least hold on to the five bonus points which were awarded for the fastest lap for the first time.

He retains second in the Repco Supercars Championship, but is now 60 points behind a still unbeaten van Gisbergen.