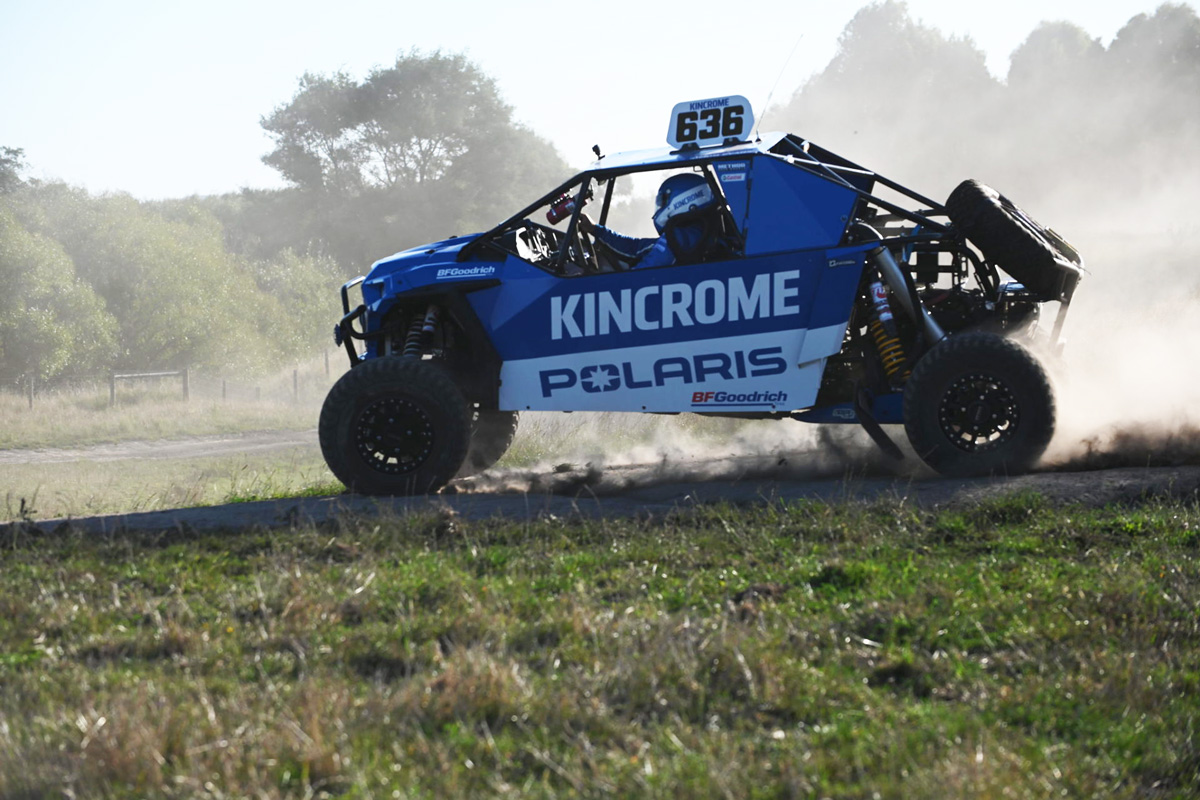 Kincrome Racing’s Simon and Evans have worked day and night to have their Polaris vehicles prepared for the opening round of the BFGoodrich Australian Off Road Championship at St George in Queensland this weekend.

The pair competed in the first event of the new-look Kincrome SXS Motorsport Australia Championship at Rainbow in western Victoria last weekend and worked around the clock to ensure they would be on the startline for the Cobb & Co Hotel St George 399 which kicks off with a prologue and shootout tomorrow.

By the time the team arrives home early next week it will have travelled more than 4200km in just 10 days – not including the hundreds of kilometres of actual racing.

Ironically, the team will make the almost 5000km return trip to Alice Springs from their home in Bass, Victoria next month for the second round of the Kincrome SXS championship.

“Jackson has done a great job getting everything turned around in such a short space of time,” said driver and team owner Simon.

“Thankfully he had the right Kincrome tools for the job – especially the pressure washer which helped remove the layers of ‘Mallee Mud’.

“We had a few issues at St George in 2019, but this time we have taken no chances and have brought a full car as a spares backup just in case we have a drama.

“The wet conditions will certainly bring the leading trophy trucks and buggies back to the SXS field so I think we are in for an interesting weekend.”

Added Jackson, “To say it has been a busy couple of weeks would be an understatement.

“It has been a big turnaround this week, but we are looking forward to getting back out there at St George.

“It has been raining plenty up there and the forecast suggests it is not going to stop.

“Usually it is dry and dusty at St George, but this weekend will be a different deal and I think a bit of wet running last weekend at Rainbow will be handy to have under our belts.

“There is no doubt that our BFGoodrich boots will also be a big asset for us.

“It would be nice to have the Kincrome colours on the podium at the first national off-road event.”

This weekend’s event will include two laps of the 80km St George course on Saturday and three laps on Sunday.

There are more than 90 entries for the weekend’s event, including 38 In the SXS class.

Last weekend’s event started in hot and blustery conditions and finished wet and cold, which coated the Kincrome Polaris’ in ‘Mallee Mud’.

Ironically, this weekend’s event is expected to run in wet and muddy conditions with rain forecast for its duration.

While the conditions will leave the Kincrome team with plenty of more work to do on the post-race clean-up, they could play into their chances of an outright win against the leading trophy trucks and buggies, which are two-wheel-drive vehicles.

Jackson’s co-driver this weekend will be his wife of two weeks, Claudia, while Simon will again be teamed with Max O’Brien.

The third member of Kincrome Racing, Eden Evans, will have the weekend off after winning the SXS Sport class on debut at Rainbow.