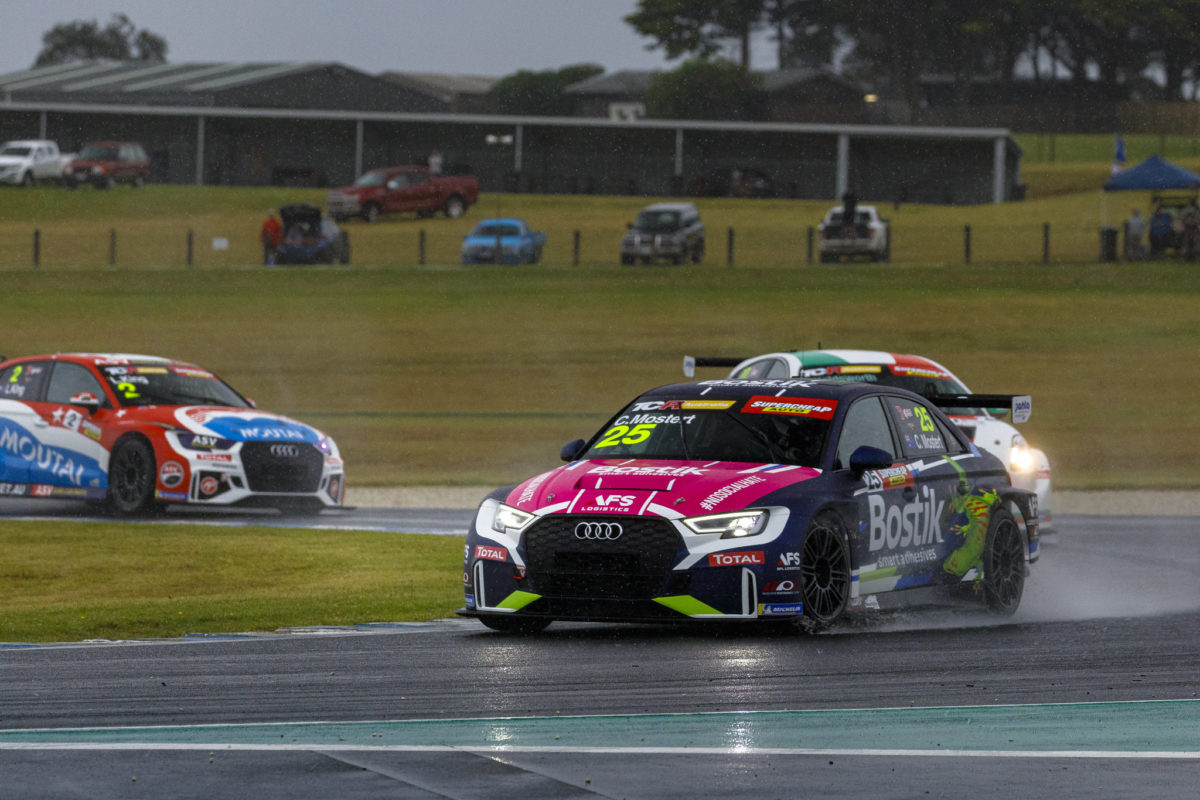 Audi team boss Troy Russell is determined to keep series leader Chaz Mostert in an RS 3 for the remainder of the Supercheap Auto TCR Australia season despite funding doubts.

Mostert won two of the three races in Round 2 at Phillip Island, vaulting to the top of the standings.

However, the Supercars star is a round-to-round proposition in the hot hatch category, and has cast some doubt over whether or not he will continue in the Audi.

Counting in his and Audi Sports Customer Racing Australia’s favour, however, is the impression made on key figures at sponsor Bostik last weekend.

“It would be pretty bad not to go when you’re leading the championship, wouldn’t it?” Russell told Speedcafe.com.

“So, I guess we’ll make it happen somehow.

“The Bostik thing was only really a one-off and that stretched into a two[-off] thing, so we’ll just keep twisting their arm and others and make it happen, I guess.

“We had all the Bostik people at Phillip Island; the CEO of Bostik and a lot of their staff and management guys were all there, so we put some corporate on and I think they all had a good weekend.”

Phillip Island also saw Mostert take his ‘No social hate’ campaign onto the race track for the first time.

The bonnet on the #25 Audi was switched from Bostik blue to pink, an idea which was supported by the adhesive brand despite initial hesitation.

“Obviously we did that pink bonnet thing, which was a Chazzy thing, so that got a bit of media as well, which is good,” Russell added.

“It was great that Bostik allowed it to happen because they’re fairly pedantic about their colours and so forth.

“When we first floated it, it was kind of like, ‘Ah…’ [Hesitant], then we ran through why Chaz wanted to do it and they agreed to it and I think they seen the value in that as well.” 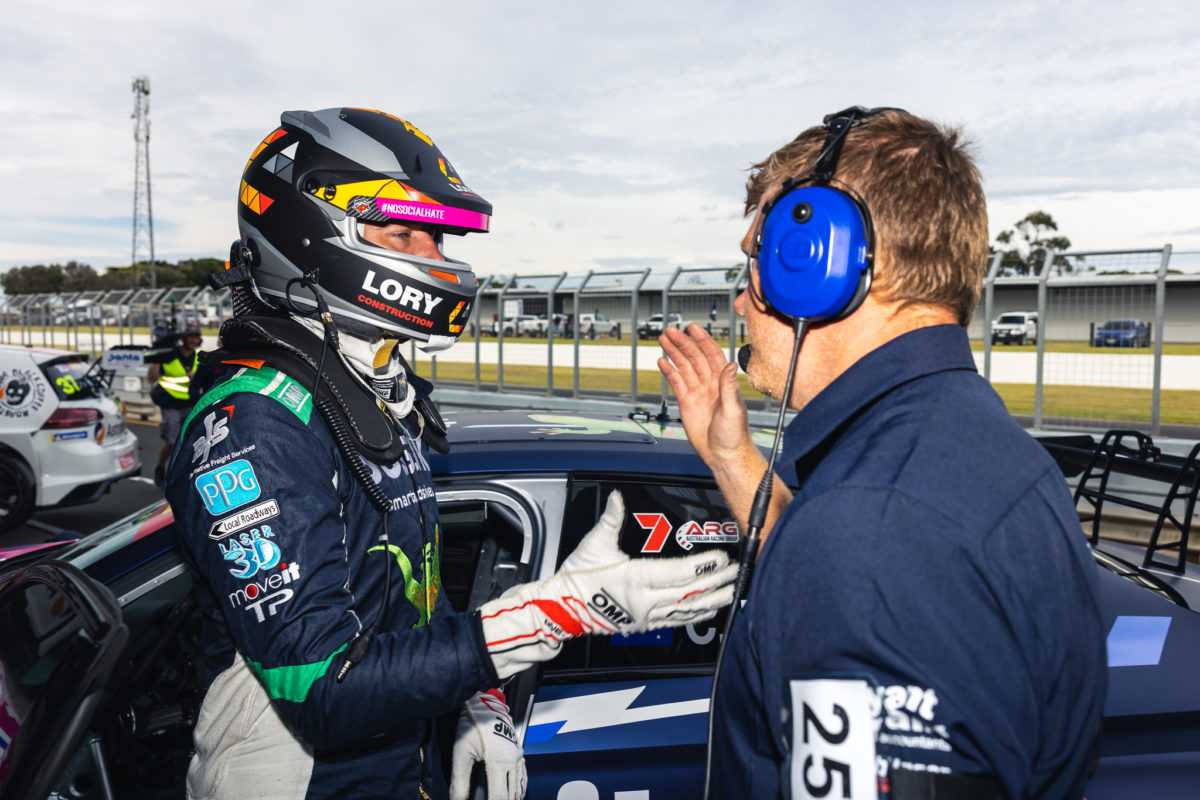 Not only did he win a wet Race 1 of Supercheap Auto TCR Australia by a record, 32-second margin, he qualified on pole for the Fanatec GT World Challenge Australia Powered by AWS round in the Tony Bates Audi R8 LMS GT3 Evo and was the fastest driver in both of those races.

Mostert was, until recent times, a contract BMW driver in the GT arena, and Russell rates him as the equal of the factory stars that Audi Sport has fielded in the Bathurst 12 Hour.

“He’s every bit as good as any of them guys,” declared Russell.

“I mean, I think any of the guys are at the top of their game. Chaz is in that same category, for sure.”

Whether Mostert will drive an Audi when the once-around-the-clock Mount Panorama enduro returns next year, however, remains to be seen.

“Well, to be honest, we haven’t really ever touched on that subject,” admitted Russell.

One down note from the weekend at the high-load Phillip Island venue was the tyre failure which put paid to any chance of a sweep of the TCR round.

Mostert was leading, albeit with eventual winner Jason Bargwanna having closed in, when the right-front on his Audi let go with four laps remaining.

After a trip to pit lane, he finished a lap down in 18th.

“There’s clearly talk about low pressures and too much camber, but we were well within what we thought was safe,” explained Russell.

“But he was pushing pretty hard, so he probably was loading the tyre more than anybody else. It’s one of those things.

“It was a green tyre to start with as well, so I think if we had the opportunity to road the tyre, it may have been better.

“But, we didn’t have that opportunity because you get your tyres from qualifying onwards, so obviously you can’t road all the tyres.

“A lot of the time, a green’s better, but I think in that case a roaded tyre may have been better.

“But it is what it is, as they say. There’s not much you can do about it.” 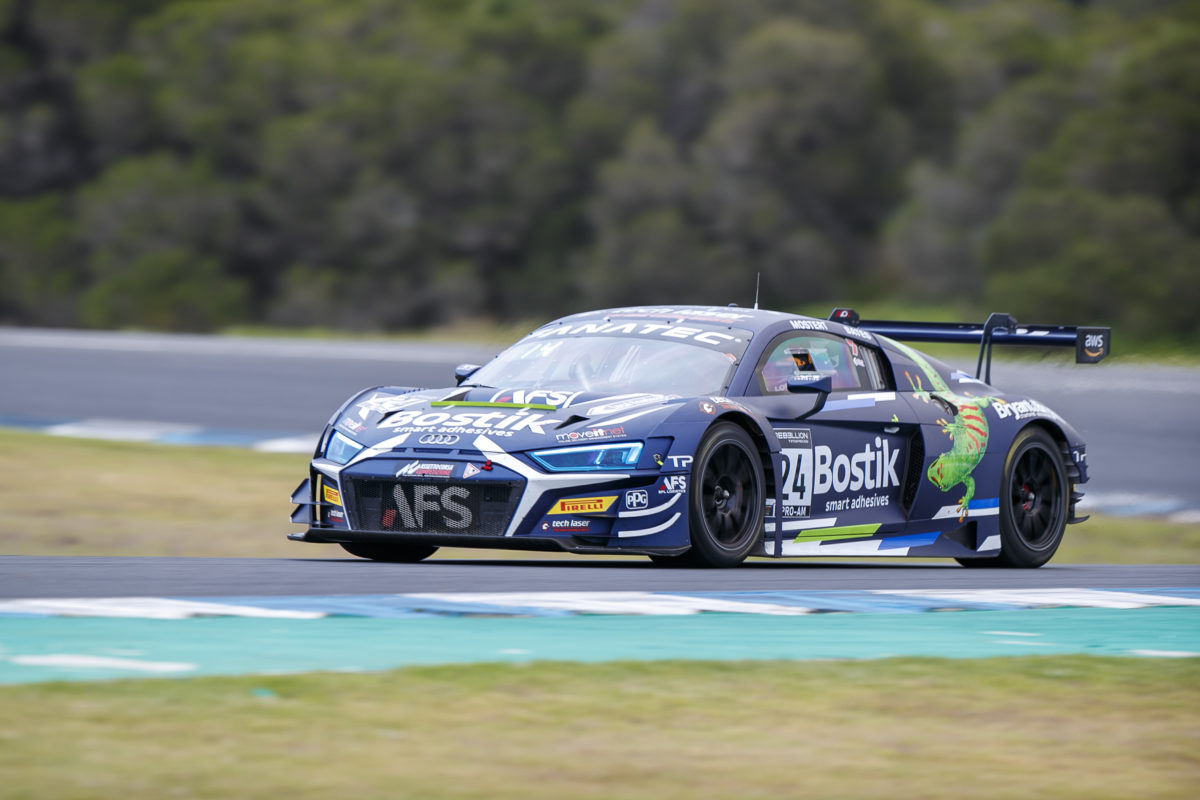 The Audi GT3 which Mostert shared with Tony Bates