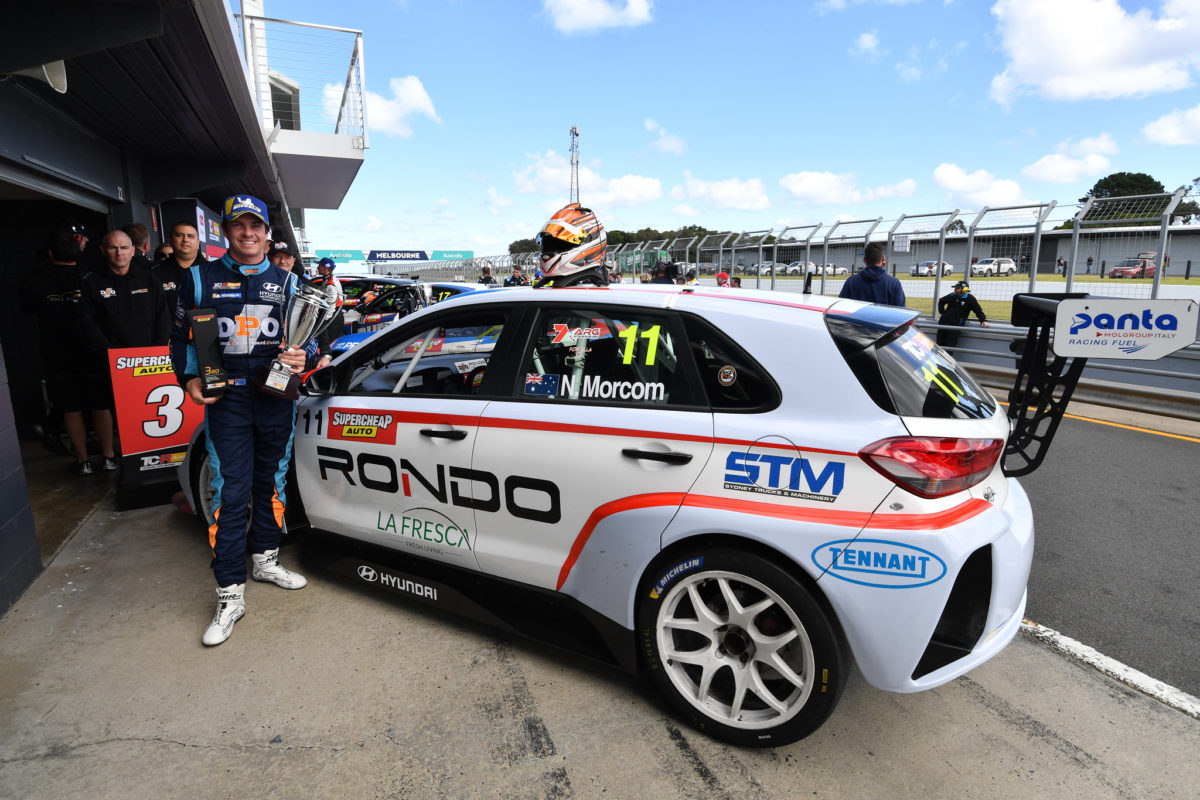 Nathan Morcom says that HMO Customer Racing “proved that we can be a force” in the 2021 Supercheap Auto TCR Australia Series with its performance at Phillip Island.

Morcom crept up a spot to fifth in the series in Round 2 of the season at the Island, where he recorded results of 19th, 10th, and then third.

It was a weekend that could have been so much better, however, given he was running fifth when his Hyundai developed an electrical problem in a wet Race 1.

The gremlin not only consigned him to a lowly finish in that encounter, but also a back row starting berth for the next, given TCR Australia used a progressive grid format.

Hyundai drivers, namely Norbert Michelisz and Morcom’s then team-mate Will Brown respectively, won both the World Touring Car Cup and the inaugural season of TCR Australia in 2019.

That led to unfavourable Balance of Performance adjustment in 2020 but HMO showed strong pace last time out.

“The weekend proved that we can be a force in the 2021 Supercheap Auto TCR Australia Series,” said Morcom.

“Practice and qualifying showed promise and the car had great grip on the Michelin wet weather tyres. It was the first time we raced with a wet weather set-up and the HMO Customer Racing Team nailed it.

“I was up to fifth when an intermittent electrical problem slowed us and there was nothing that could be done to rectify it in the pits.

“Our car has always shown great race pace and that was evident in Races 2 and 3, especially from mid-race. So, it was shoulders out and lots of fun on Sunday.

“I should have got through sooner, but the level of competition has really stepped up in 2021.”

Youngster Josh Buchan, who took over Brown’s seat this year, joined Morcom in making Qualifying 2 for the fastest 10 drivers on the Saturday morning.

He ended up salvaging one top 10 finish for the weekend, in Race 3, after an off while running fifth in Race 1, a penalty issued after that encounter, and a mid-pack crunch in Race 2.

“It was really a weekend that got away,” lamented Buchan.

“We had great race pace but unfortunately the weather during Race 1 and a post-race penalty set the tone for my weekend.

“There were two large puddles at Stoner Corner in that opening race. When you followed another car through it wasn’t that bad, but when you had a gap to the car ahead the puddle was that much deeper and I simply aquaplaned towards the edge of the circuit.

“I was then caught up in someone else’s accident at the start of Race 2 which left me with a shredded left front tyre and a last row start for the third and final race of the weekend.

“I moved up to 14th pretty quickly and followed the pack with Nathan just a few spots ahead. I had loads of speed but just lacked a little on the straight.”

Buchan sits ninth in the Supercheap Auto TCR Australia Series with Round 3 supporting the Hi-Tec Oils Bathurst 6 Hour on April 2-4.