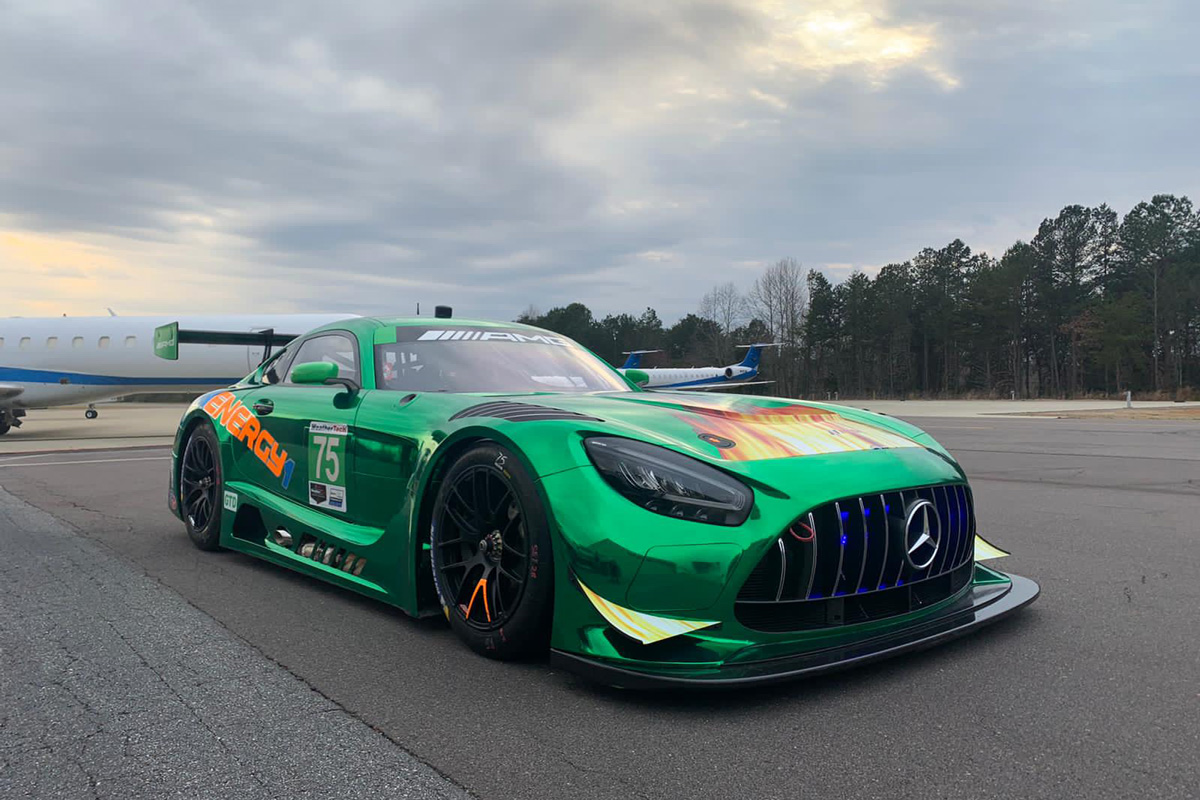 Australian sportscar ace Kenny Habul has gotten into the spirit of St Patrick’s Day with the unveiling of a green chrome SunEnergy1 Mercedes-AMG GT3 for this weekend’s 12 Hours of Sebring event in Florida.

The SunEnergy1 team was part of a Mercedes-AMG 1-2 finish in the recent Daytona 24 Hour and Habul is confident that his outfit can carry its speed into Saturday’s “once around the clock” event which is the second round of the IMSA WeatherTech SportsCar Championship.

The green look is a break away from the electric blue chrome colour scheme which the SunEnergy1 team has become famous for in recent years.

The look is not the only change for the team this weekend with German ace Maro Engel being recruited back into the fold to join Habul and Canadian Mikael Grenier.

“The result at Daytona was a pleasing way to start the year,” said Habul.

“To fall short of the win by 16 seconds was disappointing, but it was cool to be a part of a Mercedes-AMG 1-2 finish.

“We head into this weekend with a solid driver line-up and it’s great to have Maro back in the car with us.

“I was happy with my own speed at Daytona after a long break out of the car and I am looking forward to getting plenty of laps this week.

“We have always had good speed at Sebring since we came here and broke the lap record on the way to the pole in 2017.

“I thought we would get into the spirit of St Patrick’s Day and I think the car has come up a treat.

“They say green is a bad luck colour for a race car, but it didn’t seem to worry Sir Jack Brabham too much who won three world F1 championships, including his first at Sebring in 1959 when he pushed the car over the line after running out of fuel.

“If it is as fast as it looks we should be in for a pretty good week.”

Ironically, Engel, who has driven for Habul’s team successfully in the past, was part of the team which relegated the SunEnergy1 outfit into second place at Daytona.

“It was great to be a part of a Mercedes-AMG 1-2 at Daytona, but it was really a little bittersweet for me, given that it was Kenny’s team we beat,” said Engel.

“It is great to be back with the SunEnergy1 team this weekend, knowing we have a competitive car which is suited to the Sebring layout.

“There is definitely an air of confidence after the strong start at Daytona and I know Kenny is keen to get the winner’s trophy on the shelf.

“He is possibly driving at the best level of his career and is so focused on being the best he can be in the car.

“I was super impressed with his speed, leading the race at Daytona Sunday morning, he was on old tyres, I was on new, and it was a real challenge to catch him.

“He was four-wheel drifting it around the track and it was fun to watch.”

There are 36 entries for this weekend’s event across five classes, including 13 in the competitive GTD class.

Practice starts on St Patrick’s Day in the US tomorrow with Saturday’s race starting at 10:10 on Saturday, Florida time.