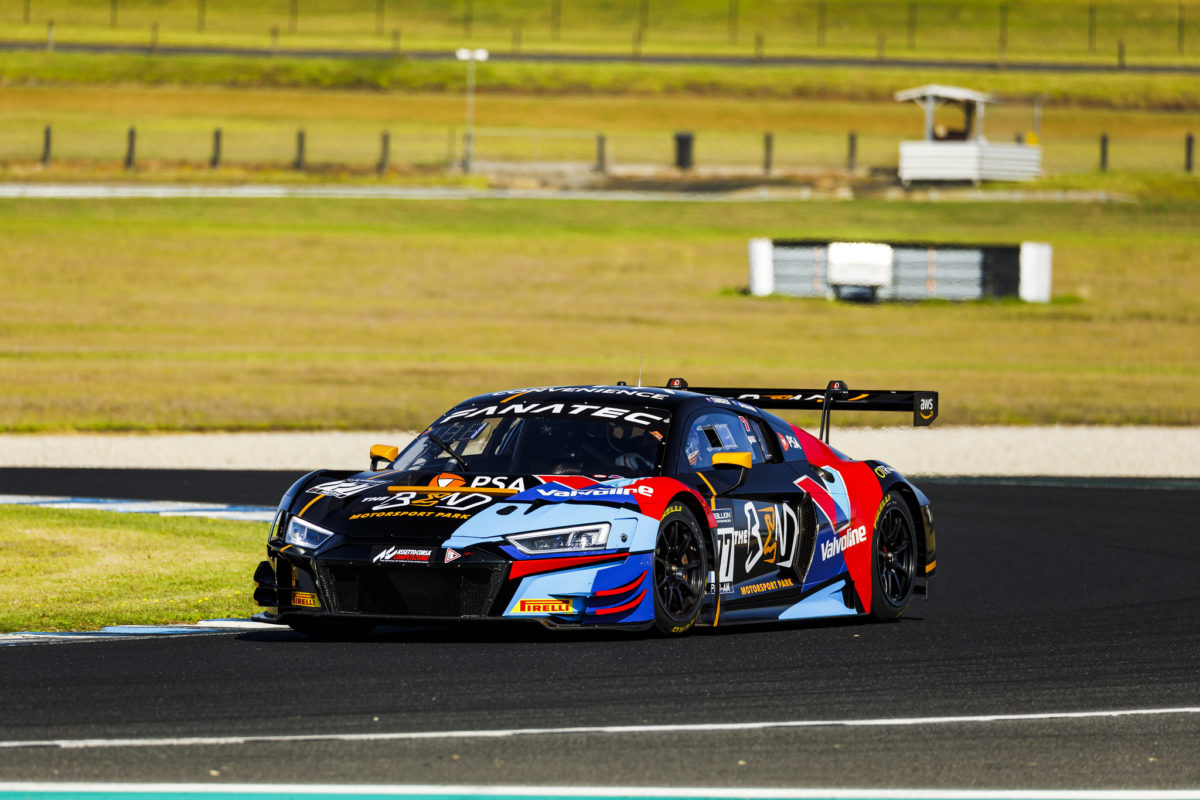 Garth Tander and Yasser Shahin have completed a sweep of Round 1 of the Fanatec GT World Challenge Australia Powered by AWS season at Phillip Island.

Unlike the day prior, however, Shahin had to come from behind in the latter stint, overtaking Stephen Grove as they ran down Gardner Straight with around five minutes remaining in the 60-minute encounter.

The big guns had started the race, Tander from first position alongside Whincup, with Mostert just behind, and it was a close-run thing when they piled into Doohan Corner at speed for the first time.

Tander and Whincup appeared to make light contact but they survived and the former emerged with the early race lead, while Mostert staved off Brenton Grove to hold third at the Turn 4 Hairpin.

Whincup had not long dropped more than a second back from the #777 Audi when he ceded second position to Mostert at said hairpin on Lap 5.

Released from behind the #888 Mercedes-AMG, Mostert rolled out the fastest lap on Lap 6 and quickly caught Tander.

However, the variable pit stop times meant that the front-runners were playing a stopwatch game as much as a track position game.

With the top three from Race 1 hit with extra dwells of 15, 10, and five seconds respectively, Mostert needed to be five seconds up on the #4 Porsche in order for Bates to get out ahead of Stephen Grove and in the race lead after the pit stop cycle.

Despite being unable to clear Tander, Mostert had around nine seconds on Brenton Grove, but that was until a Safety Car was called 20 minutes into the contest in response to Greg Taylor beaching the #5 Audi.

Tander continued to hold Mostert at bay when the race restarted, and the latter dropped a spot to Whincup when he got loose off Southern Loop on Lap 17.

As such, the Audi driver set about pressuring the Triple Eight car, and it was going to be a close-run thing in terms of trying to amass a five-second buffer over the #4 Porsche, which continued to circulate in fourth in the hands of Grove junior.

The top four all filed into pit lane at the end of Lap 18, bringing an end to the compulsory pit stop cycle.

When they emerged, Bates was into the lead, less than a second up on Stephen Grove, with Ibrahim over three seconds back in third and Shahin holding fourth.

Grove needed a lap-and-a-half to take over top spot with a move on the run towards The Hayshed, while Bates came under pressure from the two behind him.

Shahin squeezed past Ibrahim into Doohan Corner at the start of Lap 22 then got Bates at Lukey Heights before they got back around to the control line.

Confusion over a possible yellow flag saw Shahin and Bates briefly swap positions back, although Shahin had reclaimed second place when the Safety Car was eventually called.

The reason for the neutralisation was a spin at the final corner for Vince Muriti, who kept the #33 Audi off the pit wall but remained parked on Gardner Straight, against circuit direction.

It meant that the Groves lost their 13-second advantage over Shahin, who drove past Car #4 two laps after the second restart of the day.

Ibrahim looked keen to find a way by Bates in the battle for the minor placings, but ended up instead in a dice with Trophy class runner Brett Hobson (#96 Nissan).

The prince regained fourth position on the 33rd and final lap, finishing about half a second behind Bates, who was in turn almost 14 seconds back from Grove.

Hobson took fifth, and class honours, which originally looked set to go to Brad Schumacher until he spun the #55 Audi off the road at Stoner Corner on Lap 30.

Round 2 of GT World Challenge Australia, comprised of another pair of 60-minute sprints, supports the Hi-Tec Oils Bathurst 6 Hour on April 2-4.

Championship points: GT Am (AM)