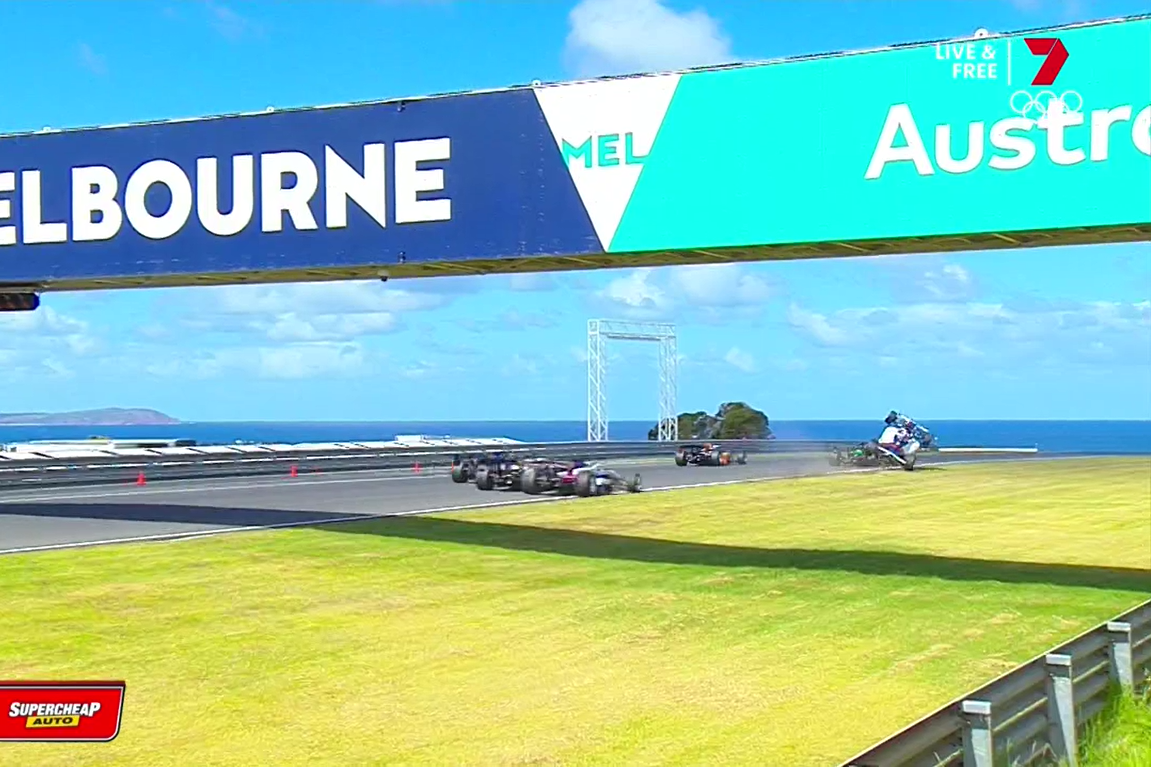 Mawson steered through an opening lap incident before vaulting to the lead and setting the fastest lap of the race on his way to victory, taking out the Costanzo Cup in the process.

As the lights went out, front-row starter Thomas Randle moved to cover drivers’ right and left Nathan Herne with nowhere to go.

Team Valvoline GRM driver Herne ran up the back of Randle and his car lifted into the air in spectacular fashion before coming to rest on the run down to Turn 1.

Officials chose to red flag the scheduled 14-lap encounter as Herne climbed from the car and was taken to the circuit medical centre.

He was then taken to hospital for precautionary checks but is said to be “OK”, according to an S5000 spokesperson.

Watch on 7mate or 7plus pic.twitter.com/Kt7auuCHrq

A lengthy 15-minute stoppage was needed for the clean-up, with Randle leading the reduced field back to green flag racing on Lap 3.

Mawson remained tucked up behind and had a look around the outside at Turn 1 on the next lap but could not get by.

Another opportunity came when Randle locked a wheel under braking for Honda but the Castrol Racing driver managed to rotate the car and make the apex.

He wasn’t so lucky the next time he locked up, running wide on Lap 6 at the Southern Loop and losing out to Mawson, who snapped up the race lead.

Randle dropped further back as Tim Macrow also snuck by at Siberia and was followed through in the next sequence of corners by James Golding.

Golding latched onto the back of Macrow and made a daring pass at Turn 1 for second on the final lap, meaning the latter would finish third.

Kaleb Ngatoa attempted to pass an ailing Randle for fourth on the final lap but the New Zealander ran off the road, handing fifth place to GRM’s Luis Leeds.

Mawson’s margin of victory after nine laps was 1.4s but Randle continues to lead the championship, by six points.

S5000 is back in action next weekend (March 20-21) when Round 3 of the championship supports Supercars’ Penrite Oil Sandown SuperSprint.