Tony Bates lost 50 seconds when he was stuck behind a stopped car before Chaz Mostert hauled his Audi back to a podium in the GT World Challenge Australia opener.

The #24 Bostik R8 LMS GT3 Evo ended up third in the first race of Round 1 of the new-look Fanatec GT World Challenge Australia Powered by AWS at Phillip Island.

Mostert had put the car on pole on the afternoon prior and Bates kept it in a competitive position in the opening stint, peeling off the race track from fourth position at the end of Lap 10.

However, that was when he happened upon the Grove Porsche which had stopped on the pit entry road due to an issue with its speed limiter.

Both Bates and Triple Eight Race Engineering’s Prince Jefri Ibrahim, who had been running three spots behind the #24 Audi, were caught in the traffic jam before they eventually made pit lane proper. 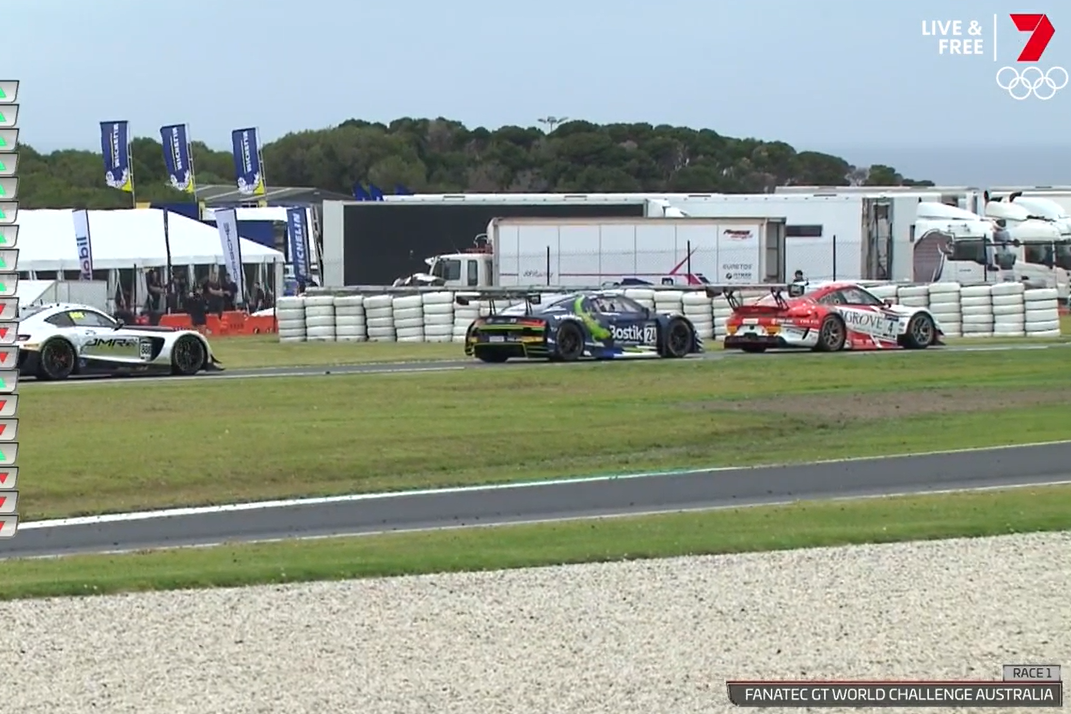 Mostert was back in 14th position, almost 47 seconds off the lead, when the compulsory pit stop cycle ended on Lap 15, but charged back to fifth in the next 15 laps.

Then, on the 31st and final tour of the 4.45km circuit, the 2014 Bathurst 1000 winner nabbed two more positions and took the chequered flag a touch under 34 seconds behind the race-winning Audi of Garth Tander and Yasser Shahin.

Along the way, Mostert recorded eight laps in the 1:29s bracket whereas the fastest lap from any other car was Jamie Whincup’s 1:30.2954s in the Triple Eight Mercedes-AMG.

“We got quite unlucky with that pit lane incident,” recalled Bates.

“We estimated our loss in the pits to be about 50 seconds, which was more than the gap to the leaders by the end.

“Chaz blew us away again, we all knew he’d gain us some time back but what he did was simply phenomenal, he’s a gun.”

That was just the second of three impressive Mostert performances of the day, given he had qualified on pole for Round 2 of Supercheap Auto TCR Australia and won the race which followed by over 32 seconds after 14 wet laps.

“I’m pumped to pick up the double podium with a win in TCR and the third place in GT, both in Bostik Audis,” he said.

“I’m disappointed for Tony, obviously we’re happy to get back to the podium but we know there was a chance at a better result in there.

“What [Race 1] proved was that we have a lot of car speed though, so we’ll see what [Race 2] brings,” said Mostert.

Car #24 will start from third for Race 2 of Round 1 of GT World Challenge Australia, another 60-minute affair, which is due to kick off at 11:50 local time/AEDT.