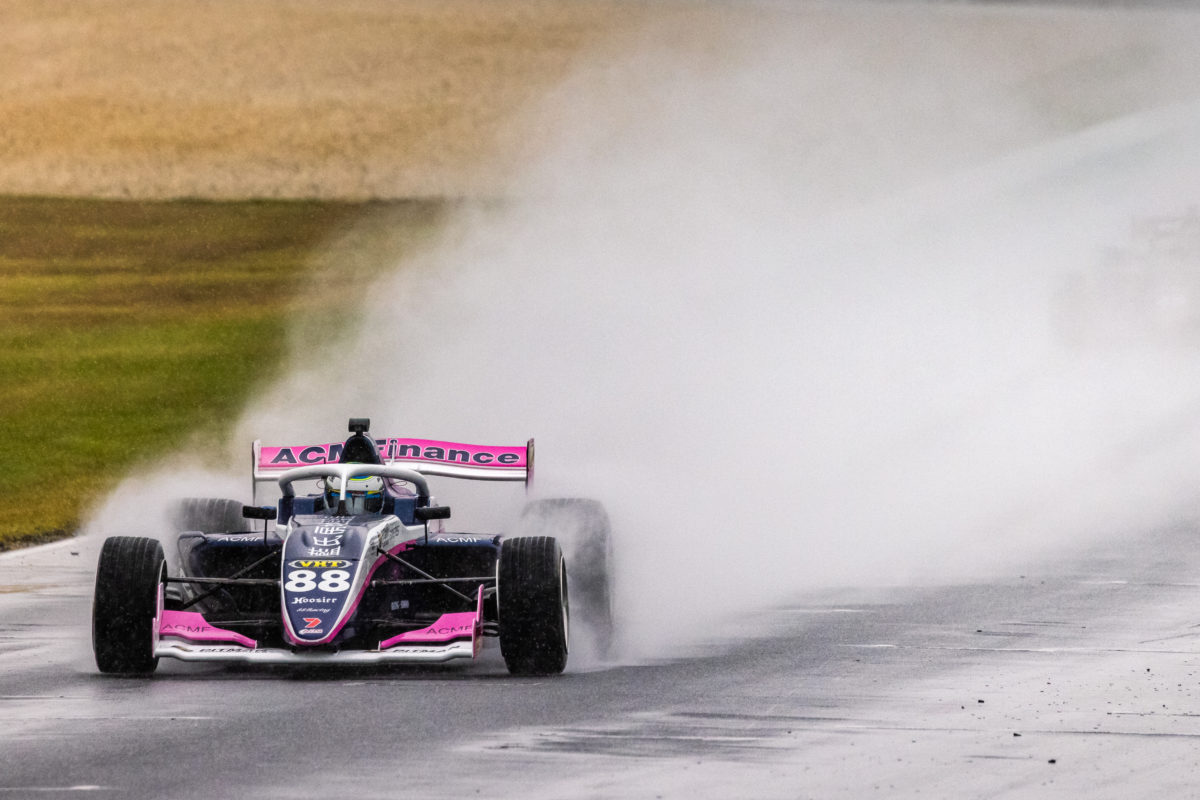 Cooper Webster has survived intense pressure from Thomas Randle to win Heat 2 of Round 2 of the VHT S5000 Australian Drivers’ Championship in tricky conditions at Phillip Island.

The rain which had been threatening to fall at the first Shannons Motorsport Australia Championships meeting of 2021 finally came in a meaningful way, making for the first ever wet race in S5000’s short history.

Webster led from lights to flag in what was a slightly shorter than scheduled 12-lap affair, but he was made to work for it given the pressure which Round 1 winner Randle put him under.

The latter’s BRM team-mate, Joey Mawson, exemplified the challenge which drivers faced when he managed to finish third despite spraying Car #27 off at Stoner Corner on Lap 11.

Kaleb Ngatoa, who only arrived from New Zealand in time for qualifying this morning in his S5000 debut, started from first position due to the grid inversion but broke into wheelspin when the lights went out.

Webster therefore led away, ahead of Luis Leeds, while Randle jumped to third from sixth on the grid, although effectively fifth given Ricky Capo could not take the start.

Randle quickly ended up in a stoush with Nathan Herne, in which he finally prevailed as they exited Siberia on Lap 2.

By that time, however, both had gone past Leeds, who was therefore relegated to fourth and dropping further.

Randle was still almost 1.9s behind Webster at that point, but caught Car #88 by the end of Lap 4, while Mawson closed in on James Golding in the battle for fourth.

Mawson put a tidy move on Golding at Stoner Corner on Lap 5, then got Herne as they rounded the entry to Gardner Straight on Lap 7.

As the rain got heavier, Randle had a big look at Webster at Doohan Corner on Lap 10 but chose not to go for it, moments before surviving a big moment at Stoner Corner.

He managed to catch the #49 Castrol entry before it left the black stuff but that was a reprieve for Webster, who went on to win by 1.0s.

Mawson did throw it off the road at Stoner Corner and, despite running through the gravel, held third position.

Herne ended up fourth, from Heat 1 winner Tim Macrow, Golding, Leeds, and Braydan Willmington, who all but pulled the left-front corner off his car some time around the end of the race.

Antonio Astuti was the last finisher, in ninth, while Ngatoa ended up parked on the side of the race track at the exit of MG corner, eight laps in, and was covered by local yellows.