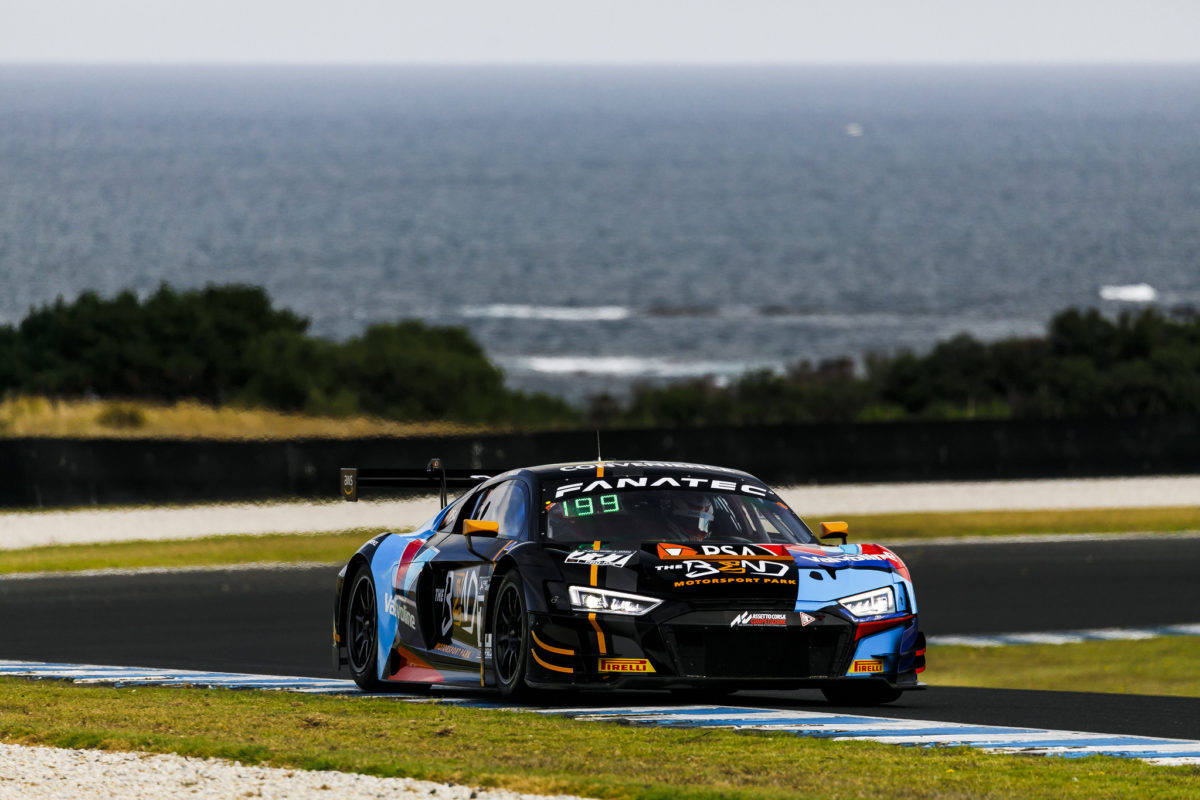 The #777 The Bend Motorsport Park Audi virtually led all but the opening lap of the weekend’s first 60-minute affair, while Jamie Whincup brought Triple Eight’s Mercedes-AMG home in second spot, 14.8s in arrears, after Prince Jefri Ibrahim started in Car #888.

However, there was no shortage of drama, particularly in the first half of proceedings, and Chaz Mostert had to cut a swathe through the field to pinch third right at the end for himself and Tony Bates in the #24 Audi.

Bates had led the field away from pole position while Shahin and Stephen Grove, who started from the second row, were both able to get by Ibrahim by the time they arrived at Southern Loop for the first time, taking up second and third respectively.

Shahin put a move on Bates at the end of the first lap to grab the lead, while Brad Schumacher (#55 Audi) took advantage of the battle among those in front to nab fourth from Ibrahim.

Shahin had amassed an advantage of more than two seconds by the time he had completed Lap 2, but that would soon be wiped out due to a Safety Car which was called amid multiple incidents.

Michael Bailey had spun the #38 Aston Martin into the ditch on the inside of Stoner Corner, while Adrian Deitz had also stopped the #88 Maranello Motorsport Ferrari off to the side of the track with what was later advised to be an electrical fire.

Furthermore, Tony Quinn (#7 Aston Martin) and Gary Higgon (#124 Audi) had come to grief at Siberia, with vision of the aftermath suggesting but not proving that there was a run-in between the two.

Stephen Grove and Schumacher sat second and third at the time of the neutralisation, having passed Bates just before the yellows were unfurled, before a restart came on Lap 9.

Shahin skipped away again, but there was more drama behind as several of the front-runners peeled off to take their respective pit stops at the end of Lap 10.

Stephen Grove stopped on the pit entry road due to what he later reported was an issue with the #4 Porsche’s speed limiter, blocking the path for those who had followed him off the track, namely Bates and Ibrahim.

All lost significant time, and there was also contact between #24 and #888 when Ibrahim was first to drive around the jam.

Shahin waited until Lap 12 to pit and Tander joined the race track with a comfortable advantage, in effective terms, over the rest.

When the cycle completed three laps later, Tander still had more than 11 seconds up his sleeve, Matt Stoupas (#23 Audi) was second, Schumacher sat third, Whincup ran fourth, and Mostert was buried in 14th.

Whincup got Schumacher through Lukey Heights on Lap 17, in the 39th minute, and needed only three more laps to overturn the two-second deficit to Stoupas.

However, Tander was still more than 19 seconds up the road at that point and, but for something else remarkable, that was the end of the story as far as the first and second placings were concerned.

The weather did threaten something else remarkable as light, patchy rain began to fall over Phillip Island, but that did not stop Mostert from charging up the order.

He started the 31st and final lap in fifth but made up two positions to nab a well-earned podium.

Schumacher ended up fourth, first of the Trophy class runners, and Stoupas fifth.

Wayne Mack was running 11th when he crashed the #47 Ferrari into the pit wall exiting the final corner, consigning him to a DNF.

That meant Andrew Macpherson/Ben Porter inherited 14th in the #51 Lamborghini despite the latter having a lurid spin at Southern Loop in the closing stages due to a contact-induced tyre failure.

Race 2 takes place tomorrow, the final day of Round 1 of the Shannons Motorsport Australia Championships, at 11:50 local time/AEDT.