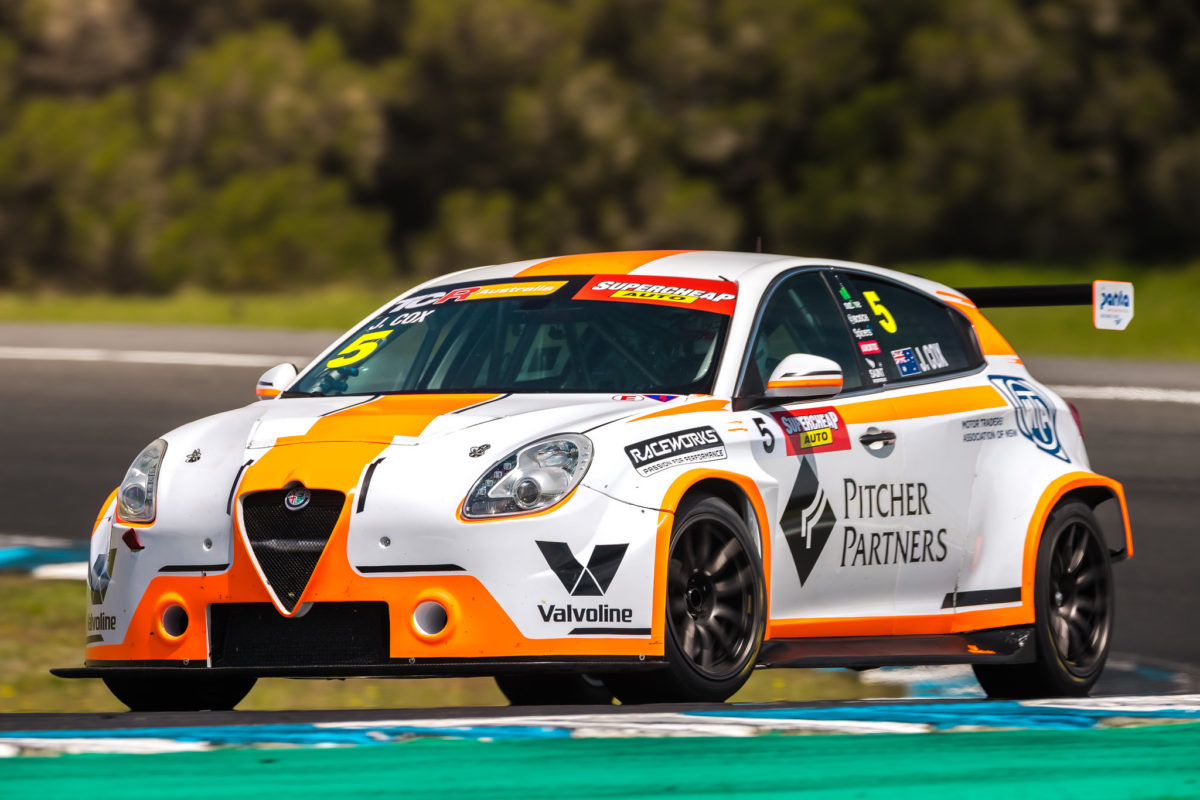 The Sydney-based driver took his first two race wins in the hot hatch category in the 2021 season-opener at Symmons Plains in January, and holds a four-point advantage over Lee Holdsworth atop the standings.

While his TCR experience at Phillip Island is limited to this year’s pre-season test, he already knows his way around the Victorian circuit.

It was at an Island Magic event, as an 18-year-old, that Cox took his very first win in car racing.

Triumphing in an Improved Production field which included the likes of Ray Hislop and Leanne Tander, the performance even drew praise from the latter’s Bathurst 1000-winning husband, Garth.

“It was my third race meeting, I think; it was raining and I was in my little Suzuki GTI with a hundred horsepower. I put it on pole and won the race in the wet, so it was pretty cool.

“I was against Ray Hislop and Leanne Tander – she had an RX7 that she was racing – and I remember Garth actually came up to me and gave me a high five and said, ‘Well done’, so that was pretty cool.

“It was the first time I crossed the line first in a race, so I’ve only got good memories there.

“[I] love the track, I think it’s world class, and it’ll definitely suit the TCR cars, for sure.”

Cox is nevertheless level-headed about holding the Supercheap Auto TCR Series lead with just one round out of six down.

While he is the man to beat, at least in theory, such are TCR regulations that his Garry Rogers Motorsport Alfa Romeo Giulietta has been saddled with 60kg of success ballast, or “a horse jockey in the passenger seat” as Cox quips, for Round 2.

“I’m sort of not getting carried away with the series lead,” he explained.

“While it’s nice, it’s Round 1 of six, so big picture, it’ll take until about Round 3 until we figure out the lay of the land and where everyone’s at with points and see where we are.

“I’m just taking it as another race meeting to start with.”

With GRM running an Alfa Romeo for Michael Caruso also, as well as Peugeots and Renaults, Cox is not the only driver in the squad who is affected by ballast.

Team director Barry Rogers, who wears another hat as the largest shareholder of the Australian Racing Group which owns TCR Australia, nevertheless sees the bright side of the measure.

“[The Alfa Romeos] were pretty much out in front down in Tassie,” he noted to Speedcafe.com.

“You want good, close racing, and I think with that weight in them, that’ll certainly bring them back to the field.

“I don’t think anyone really enjoys follow-the-leader or someone darting off into the distance, so I’m really hoping and expecting the racing to be really, really competitive down there.

“We were down there earlier in the year for the test day and it was pretty close back then, and when we raced back in 2019 at Phillip island, it was one of the better tracks with these cars.

“I think we’d expect pretty good racing over the weekend and I think it’ll be pretty competitive up the front for sure.”

Practice starts today at 10:30 local time/AEDT as part of Round 1 of the Shannons Motorsport Australia Championships.