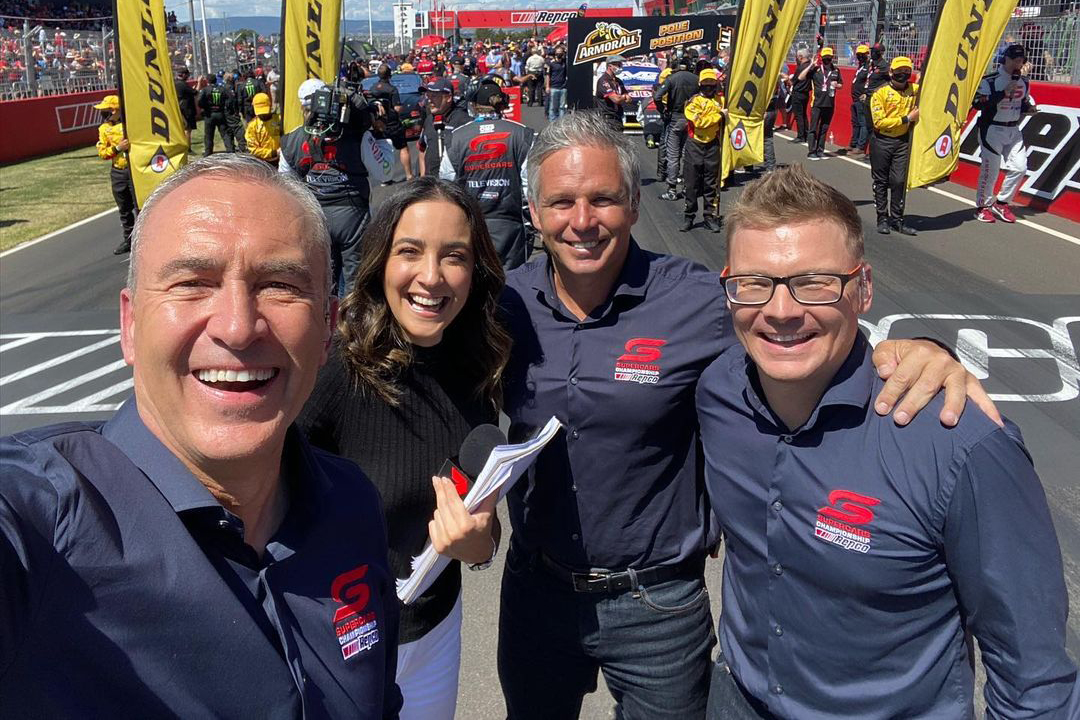 Jack Perkins says he was stoked to be part of Supercars’ return to Channel 7 at Mount Panorama having grown up with the network.

After a six-year deal with Network 10 came to an end last year, the Seven Network was signed as the category’s new free-to-air broadcaster.

Channel 7 first began showing the Australian Touring Car Championship in 1963, first losing the rights at the end of 1996.

For Perkins, being part of the Mount Panorama 500 broadcast was a moment he relished.

“It was great, to be at Bathurst with Channel Seven was really cool, obviously not only for me but for the championship,” Perkins told Speedcafe.com.

“I grew up watching Supercars on Seven at Bathurst and they’re really passionate about the sport. That was their first event and they’re looking forward to many more.

“They were the hosts and commentators at Bathurst when I was young. They were the people that really catapulted touring cars into the lounge rooms and set-up what we call the sport now.”

The Mount Panorama 500 marked the first event for the Seven Network in a new five-year deal as the free-to-air broadcaster.

The former Supercars full-timer said he’s encouraged by the network’s first showing, which he believes bodes well for the future.

“To be able to work alongside Mark Beretta and Abby Gelmi and even Brad Hodge, some new faces and people that are really keen to promote the sport, which is great for Supercars,” Perkins added.

“The network is really passionate about it. For me to play a little role with Seven is really cool personally.

“I think the big winner is Supercars because they’re committed for five years and that’s just a small taste of what’s to come.”

“It’s all been really positive,” he said of the feedback he’s received to date.

“Motorsport fans are pretty vocal and not shy in passing on their comments, but for me personally it’s all been really positive.

“Clearly it was Seven’s first crack at it in their return. They’ll be looking to only improve which is great news for Supercars fans.

“From a personal point of view, all of the positive feedback about what we did and what I did has been great.

“I just enjoy talking about Supercars, offering up some insight. It’s just good to be able to showcase who they are as people and drivers.”

Perkins will join Channel 7 once again this weekend, this time for the opening Shannons Motorsport Australia Championships event at Phillip Island.

It will be the first time Perkins has been part of the coverage, headlined by the Supercheap Auto TCR Australia Series.

The 11-time Bathurst 1000 starter had been slated to join the coverage last year, but was ultimately unable to due to the coronavirus pandemic.

“This feels like it’s been 12 to 18 months in the making for this round,” said Perkins.

“I’m just looking forward to joining the team who’ve kicked it off at Tassie.

“Again, some of the same people are involved from Bathurst and then some other names as well like Rusty [Greg Rust], Naulty [Matt Naulty], and Crailsy [Richard Crail], they’re all really good operators. I think it’s great.”