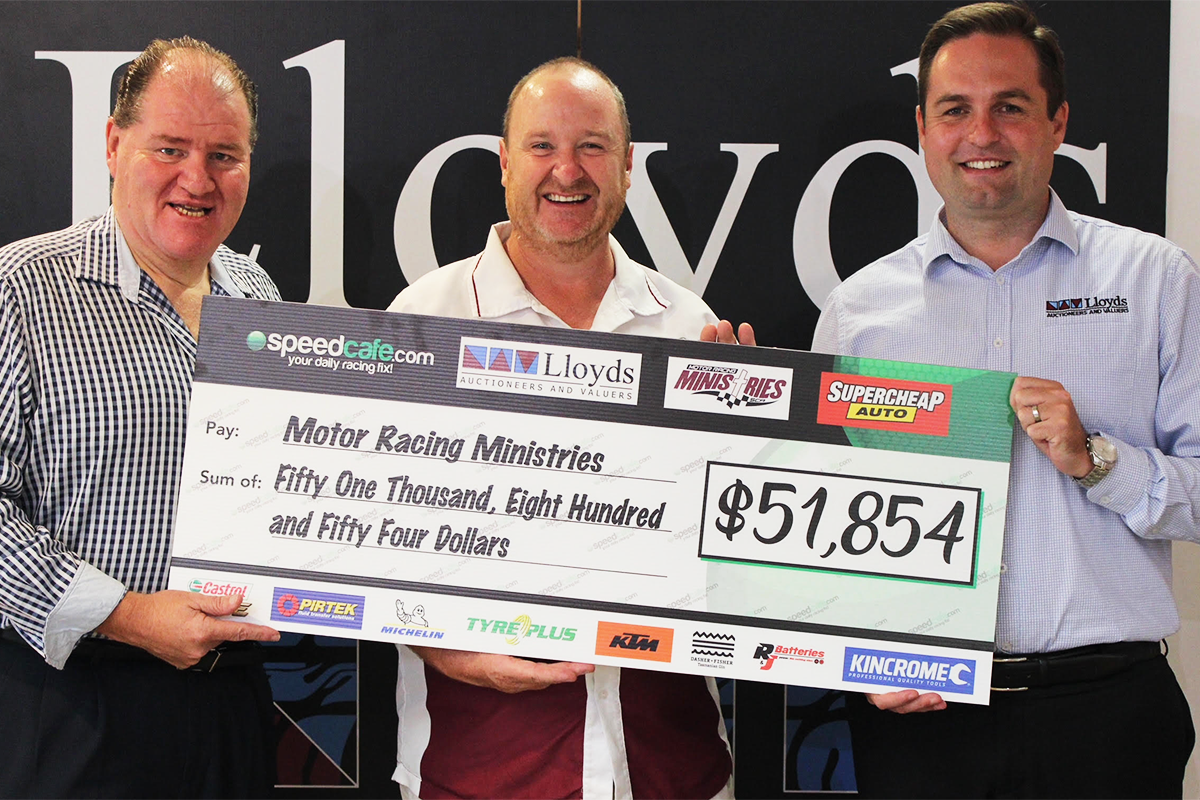 The sale of a Scott McLaughlin trophy from his 2020 Supercars championship season has helped Speedcafe.com reach a significant milestone for its chosen charity Motor Racing Ministries.

The trophy from last year’s Sydney Motorsport Park night event raised $7300 and has boosted the 13-month fundraising total to $51,854.

Lloyds Auctions, a Speedcafe.com Platinum Partner, provide all the infrastructure, logistics and shipping and charge a zero percent buyers premium for the monthly auctions, which means 100 percent of all monies raised go directly to Motor Racing Ministries.

Motor Racing Ministries has been lead by the Reverend Dr Garry Coleman, who was awarded an Order of Australia medal as part of the Queen’s Birthday Honours list in 2010.

Coleman has headed up motorsport ministry in Australia in various disciplines including rally, bikes and boat racing for close to three decades but is starting a process of transition.

The Reverend Stephen Peach, who has been a part of Australian motorsport for 13 years alongside Coleman, was recently installed as the new chairman of Motor Racing Ministries.

The role and function of the motorsport chaplains goes unnoticed or recognised the majority of the time as they help guide drivers, teams, officials, volunteers, the public and families through many critical periods when there are severe accidents or injury as a result of competition.

Despite motor racing events being limited in 2020 because of COVID-19, Coleman, Peach and the chaplaincy team have been active helping members of the community who are finding themselves battling financially, with mental health issues and any number of other challenges.

“The last 12 months have been difficult for so many people on so many levels and that has meant plenty of work for our team to do behind the scenes,” said Peach.

“The support of ‘Crusher’ and Speedcafe.com has been nothing short of incredible and words can not express how grateful we are to them and Lloyds Auctions for their commitment to our cause.

“The donations help us keep our team current with training, and enable us to respond when people face challenges away from the track. All our chaplains are self-funded, but the money raised helps us deliver the services we provide to all forms of Australian motorsport across the country.

“Going forward, this money will allow us to find and train up some more chaplains and spread the load of this critical work.”

There are currently 50 serving chaplains across the country who work with the motorsport community through a host of other activities including personal counselling, funerals, weddings, christenings or simply helping someone in the industry when they are facing difficulties.

Speedcafe owner and founder Brett ‘Crusher’ Murray said he was delighted to exceed the $50,000 mark, but that it was just one milestone on a long journey.

“The team at Motor Racing Ministries do an amazing job around the country and we are proud they are part of our community commitment,” said Murray.

“The amount of money that we have raised would simply not be possible without the unwavering support and enthusiasm from the team at Lloyds Auctions, who have supported us 110 percent from day one and have been incredibly proactive Speedcafe.com partners.

“We also have to thank Roland Dane and the team at Triple Eight, Michelin, Graham Moore, Supercheap Auto, Allan Moffat and Scott McLaughlin for their donations and genuine support of the cause during the last 12 months.

“We look forward to us hitting the magical $100,000 mark somewhere down the track.”

Since its inception in 1986, Motor Racing Ministries chaplains have attended more than 12,000 motorsport events in Australia across every one of the sport’s disciplines.

The McLaughlin trophy was the 13th item auctioned since December 2019.

If anyone has a unique item they would like to donate to one of these monthly auctions, please contact us at [email protected].