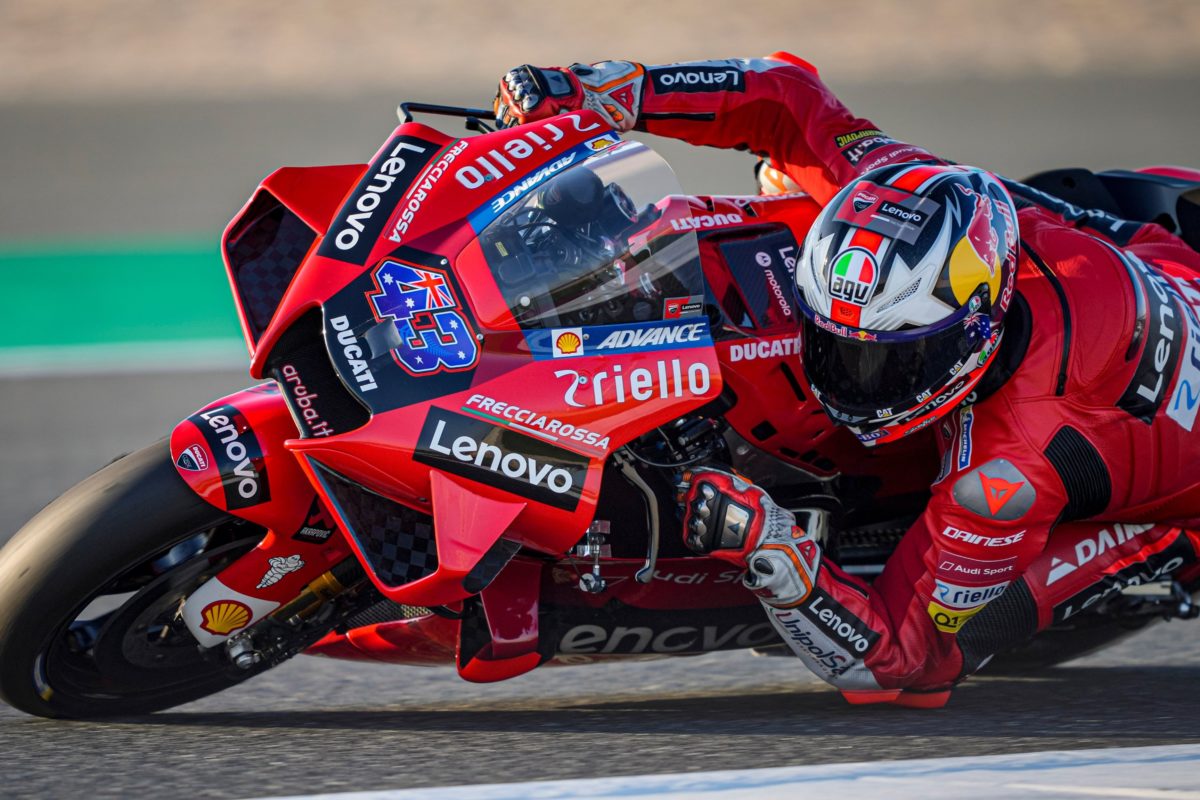 Jack Miller says that he and Ducati are “chasing our arse” trying to find incremental improvements in MotoGP’s pre-season testing.

Miller ended up second-fastest after his first official outing for the factory Ducati Lenovo Team at Losail, which also hosts the second and final pre-season hit-out later this week.

As a non-concession manufacturer, the Italian marque must take the same engine into the 2021 season as it had homologated for 2020, a cost-cutting measure implemented in response to the COVID-19 pandemic.

While Aprilia remains a concession manufacturer and KTM was granted permission to design a new engine despite losing its development privileges last year, the other four factories have been forced to go searching for small gains.

Coronavirus has also forced a shake-up to the pre-season timetable, with the opening Official Test moved from Malaysia’s Sepang to Losail, and held more than a fortnight later than had been planned.

With just two days off between the next, three-day hit-out at the Qatar Grand Prix venue, Miller admits that the programme also represents a physical test for riders.

“But a few days off will be nice to let the body recover a little and get back into it again.

“For sure it’s different, but in saying that I think it’s good, especially for the rookies. They get a lot of days riding the track and they get to race at the track.

“It’ll help them, but in terms of us, the guys that have been here already, it’s kind of weird because we’re just sort of trying to chase our arse a little bit, just sort of nit-pick here and there on the bike and try and understand what we can improve and what we can’t.”

Miller did get to test a new aerodynamic fairing on the Desmosedici GP21, which he said was a step up on the old version, albeit a small one.

“Yeah, I had that one pretty much the majority of today, only doing a back-to-back with the older one,” said the 26-year-old of the fairing.

“I’m pretty positive with it. We’ll have to look at it a little bit more and see if they can develop it further or if that’s what we’ve got for the season.

“But pretty happy with how it’s going. We didn’t lose any speed, so that’s a positive. It’s quite similar [to last year’s], nothing really strange.

“The bike’s got maybe a little more stable, but that’s about all.”

Nevertheless, the 2016 Dutch TT winner is hopeful that Ducati will find some more in the next three days of testing, before returning to Qatar for the season-opener.

“I mean the job is still not over, we have another three days testing here,” noted Miller.

“So, we will see what we can change in three days of going around the same circuit.

“Anyway, I’m pleased with what they’ve done with the restrictions that the team’s had. They did a fantastic job and I’m looking forward to racing the GP 2021.

“But it’s always close here. Qatar is one of those tracks where the bikes work well and it will be even closer this year after five days of testing here before the race.”