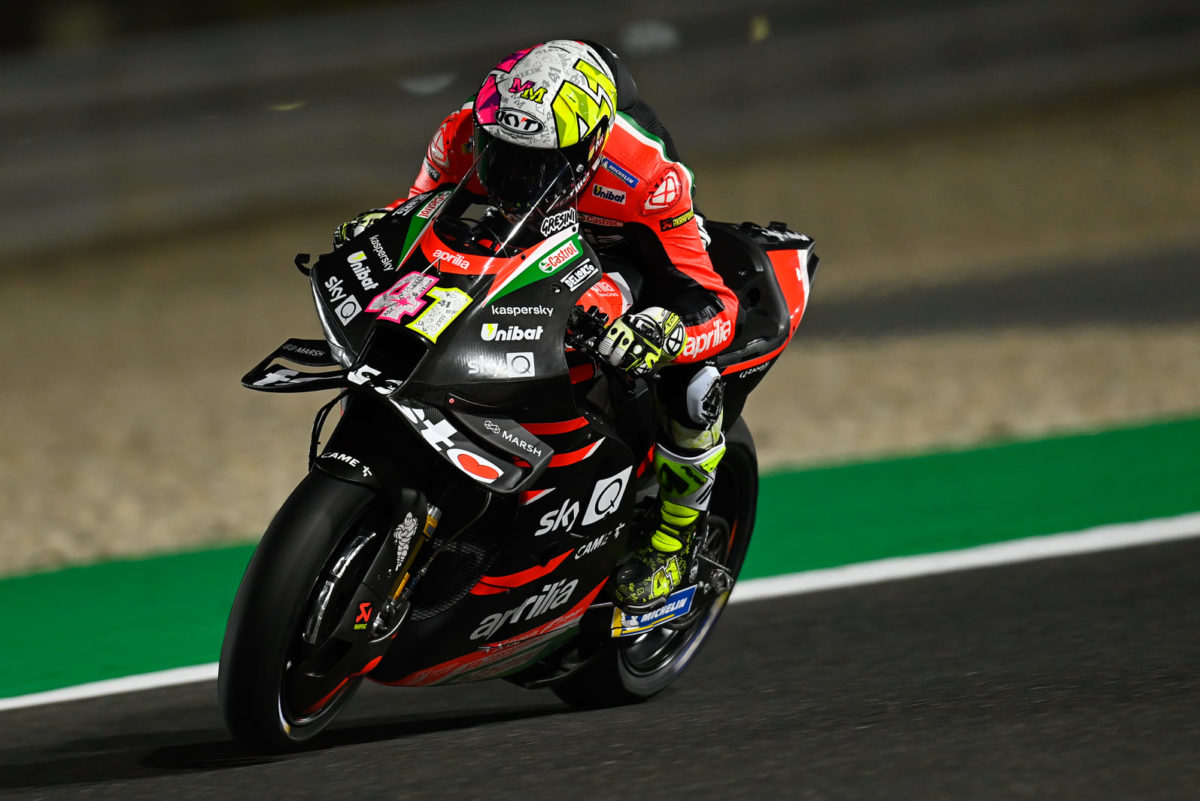 Aleix Espargaro and Aprilia Racing Team Gresini finished top of the timesheets on the opening day of MotoGP pre-season testing at the Losail International Circuit.

The Spaniard set a 1:54.687s to beat Stefan Bradl (Honda Test Team), who was aboard the Repsol Honda typically occupied by Marc Marquez, by 0.256s.

A total of 29 riders took to the track in windy conditions, following on from the previous day’s Shakedown Test.

It saw Pol Espargaro make his debut for the Repsol Honda Team, banking 68 laps aboard a 2020-spec bike as the team tested new exhausts.

Bradl had three chassis at his disposal: the ‘standard’ 2020 chassis, the chassis he ended the 2020 campaign on which has carbon bonded to the main beam, as well as an entirely new chassis.

The duo recorded a combined 91 laps, with test rider Sylvain Guintoli adding another 50 and Takuya Tsuda 26.

Both Jack Miller and Francesco Bagnaia suited up for Ducati Lenovo Team for the first time, Miller fourth fastest at the end of the day, completing 54 laps in total.

He and Bagnaia were on 2020 Ducatis but did try the 2021-spec aero, with the Australian saying he couldn’t find any faults.

Bagnaia finished P13 but was only 0.8s off the top despite a crash at Turn 3.

Ducati test rider Michele Pirro was also circulating with new aero on the front of his GP21.

Johann Zarco was fastest for Pramac Racing at points during the afternoon but ended the day sixth overall with less than half a second splitting him from Aleix Espargaro at the top.

Team-mate Jorge Martin was on track for his second day as a MotoGP rider, albeit with a sore leg after his Turn 3 crash during the Shakedown Test.

Brad Binder and Miguel Oliveira both sat near the summit in the early stages of the test for KTM.

By the end of the day, Oliveira was the fastest RC16 rider on track, the Portuguese rider setting a 1:55.084s to finish fifth overall on his first day as a factory rider.

Binder fell at Turn 2 but was able to head back out, ending the day in P12 after 52 laps.

KTM test driver Dani Pedrosa, however, was riding an RC16 kitted out with a new chassis, a whole new tail section and a new exhaust inside that tail unit.

He finished the day 26th on the timesheets and completed 48 laps.

At Yamaha, Valentino Rossi did more than 50 laps for his new Petronas Yamaha SRT team.

However, it was team-mate Franco Morbidelli who was the quickest YZR-M1 rider on Day 1, as the Italian finished P7 and 0.487s adrift. Rossi was P14.

He was just over a second off the pace in P15, one place behind Rossi.

Alex Marquez’s day didn’t get off to the best of starts after destroying his RC213V in a final corner crash, but was able to quickly return to the track.

He proved the second quickest Honda, behind Bradl, and finished 10th, just ahead of Takaaki Nakagami.