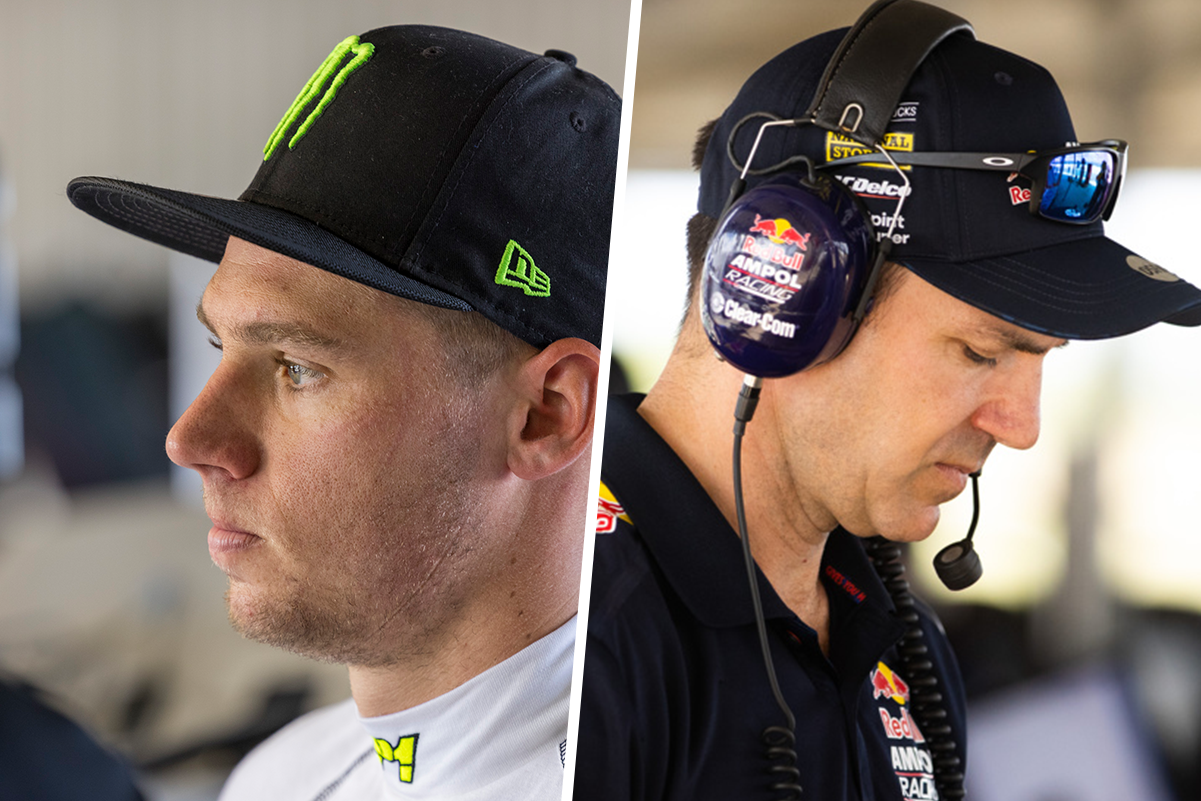 Cameron Waters has refuted Mark Dutton’s suggestions of foul play but apologised for his carelessness in dragging dirt onto the race track during today’s Top 10 Shootout.

Waters was investigated after the shootout which finalised the starting grid for Race 2 of the Supercars Championship at the Repco Mount Panorama 500 when a team apparently lodged a complaint over the matter.

The Tickford Racing driver was followed in the session by Chaz Mostert and then Shane van Gisbergen, and Dutton, the latter’s team manager at Red Bull Ampol Racing, described the incident as “dangerous driving”.

Stewards looked into the matter but no sanction was issued in the end, with Waters taking the front row starting berth he had earned alongside van Gisbergen for the start of the 40-lap encounter which followed.

It has not yet been confirmed which team requested any investigation.

Dutton’s comments to Speedcafe.com were, however, raised in the post-race press conference, which featured all three of the aforementioned drivers, at which time Waters was asked if he wanted to hear them.

He did not, and was unperturbed by that commentary about the drama.

“Nah, I don’t really care, to be honest,” Waters responded.

“I’ve already apologised, and I didn’t mean it.

“He’s got his opinion; cool. To be honest, I’m not going to lose sleep over it.”

Asked if he considered the matter a closed book now, Waters said, “Yeah, I’ve got nothing more to add.

“I didn’t get pinged for it because there’s nothing in the rule book, and I didn’t intentionally do it; like, I don’t want to see these boys shunting on something that I’ve intentionally done.

“I was the first person to put my hand up as ‘Bairdo’ [Driving Standards Advisor Craig Baird] would have said and Chazzie got, so, yeah, big fighting words from Dutto. Cool.”

Waters was, however, contrite about the incident itself, putting it down to a moment of carelessness on his cool down lap.

“On my in lap, I was just kind of fat-arming it and over Skyline, that kerb there, I took too much kerb and grabbed a bit of the dirt,” he explained.

“[I] didn’t really think anything of it at the time because I was too busy looking at the crowd.

“Then, went up and saw Bairdo after and [he] showed me the footage.

“Straight away, I felt really bad and I sent Chaz a message straight away and before the race apologised to Shane as well.

“That’s not what I’m about, I just wasn’t really thinking. I was just, like I said, fat-arming it at the time.

Mostert, the driver onto the circuit immediately after Waters, was the only participant in the shootout to lose ground relative to his provisional qualifying result.

His lap featured a wild run through The Esses and he referred to the dirt during his incar television interview, before being asked to elaborate in the press conference by Speedcafe.com.

“I rolled out on my warm up lap and, as you do, you scout the lap, see what’s happening with the track.

“I committed to come down The Esses and as I came down through The Esses there was dirt all over the inside of the left-hander in the middle there.

“So when I hit it, my knackers went straight to my throat, kind of locked both fronts and thought I was about to crash like Bryce [Fullwood, team-mate] did at the end of last year.

“So, wobbled through the right-hander and just picked it up through The Dipper there, but a big scary moment that was something I didn’t expect.”

Van Gisbergen, who still managed to convert provisional pole into actual pole, simply recounted, “There was dirt on the track, yeah, where no one went off on their fast laps…”

Mostert confirmed that there were no hard feelings, although he did joke that Waters’ recent speedway racing may have played a part in what happened.

“I think he spent too much off-season on the dirt, obviously,” said the Walkinshaw Andretti United steerer.

“Nah, look, it is what it is. Like he said, he sent me a text and you know drivers generally don’t intentionally do it but, at the time, it was a pretty big moment.

“I’d rather any other corner around Australia and any other track instead of there.

“We’re all friends here and I’m sure I’ll just roll around somewhere at some point and put a bit of dirt on their race or something,” he concluded light-heartedly.

Van Gisbergen won the race which followed, ahead of Waters and Mostert.