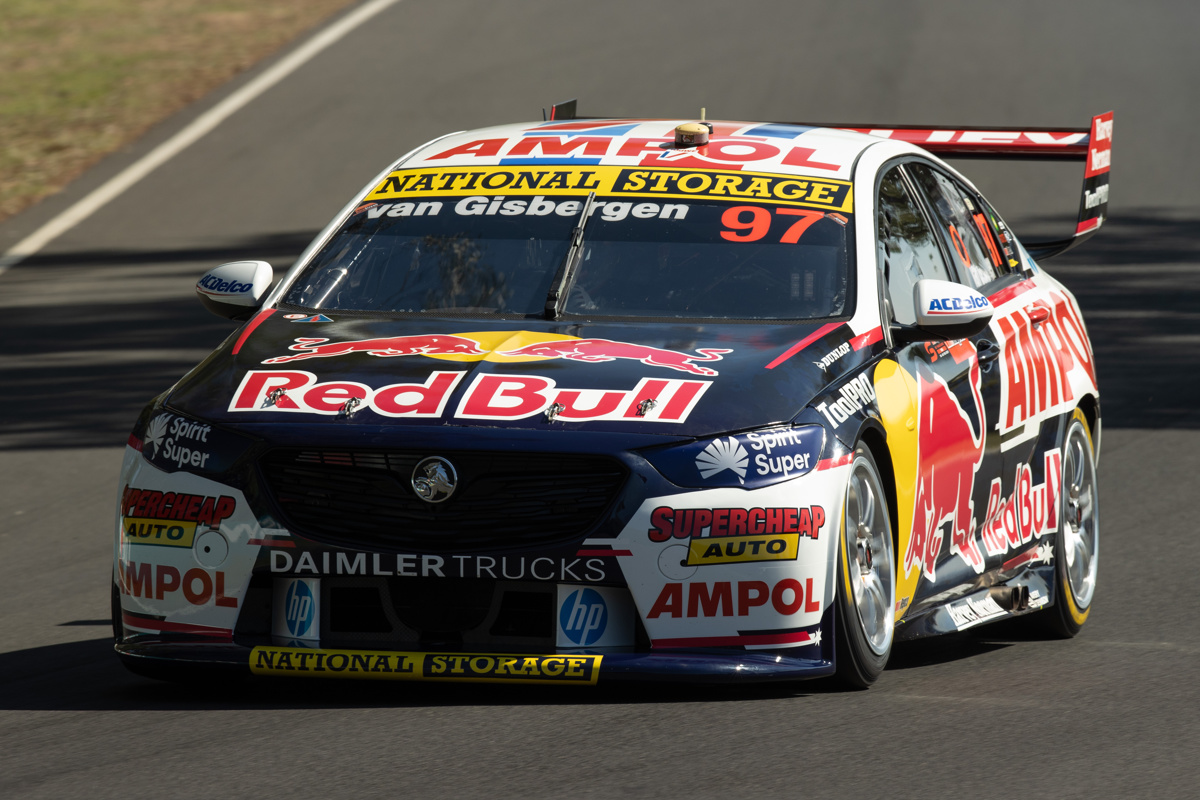 Shane van Gisbergen has converted provisional honours into pole proper in the Top 10 Shootout ahead of Race 2 at the Repco Mount Panorama 500.

The Red Bull Ampol Racing driver set a 2:05.6175s and will share the front row this afternoon with Tickford Racing’s Cameron Waters, who gained one position relative to his earlier qualifying result with a 2:05.7314s.

Row 2 will be an all-Shell V-Power Racing affair of Anton De Pasquale in third and Will Davison in fourth, albeit with more than half a second between them in the one-lap dash.

Chaz Mostert was the only man to go backwards, from second to fifth, with the rest of the 10 being Mark Winterbottom, James Courtney, Jamie Whincup, David Reynolds, and Andre Heimgartner.

As was the case when the shootout corresponding to Race 1 of the 2021 Supercars Championship was run exactly 24 hours earlier, the midday sun made for a slippery race track and few could get a particularly tidy lap in.

De Pasquale was one of them, however, and his 2:05.8009s in the #100 Mustang looked like it would be tough to beat for the three drivers still to come.

The next on track was Waters, who was relatively rapid across the top but a little unsettled into Murray’s Corner, ultimately setting a 2:05.7314s in the #6 Monster Energy Mustang.

Chaz Mostert missed provisional pole by less than a tenth of a second earlier in the day but bumped the wall at Forrest’s Elbow on his shootout lap and ended up fifth in the #25 Mobil 1 Appliances Online ZB Commodore on a 2:06.4599s.

The Walkinshaw Andretti United driver also looked aggressive through The Esses and The Dipper, but reported at the end of his lap that he had come upon dirt which had been dragged onto the track.

His misfortune meant that only van Gisbergen (#97 ZB Commodore) could deny Waters a third straight pole at Mount Panorama, and that is indeed what he did.

The Race 1 winner gained more than two tenths on Car #6 through the first sector, then had a wild moment on the kerbs at The Esses, but tripped the beam at the bottom of the hill with a time 0.1139s faster than the Tickford man.

“I could see at the start how bad the track was and how close everyone was and how many moments they had,” explained van Gisbergen.

“My reference was looking good until Skyline; I thought I’d thrown it away. Finished the lap really strong.

“Thanks to the team, car has been awesome all weekend; looking forward to the race.”

De Pasquale was therefore third all told and his team-mate Will Davison fourth, the latter having used roaded tyres to set a 2:06.3136s in the #17 Mustang.

After Mostert, the five drivers who round out the top 10 all ended up where they started.

Whincup was slower to the first sector than the two who went before him but regained some ground in setting a 2:06.9558s which leaves the #88 Red Bull Ampol ZB Commodore eighth.

The second and final 40-lap race of the weekend is due to start at 15:00 local time/AEDT.