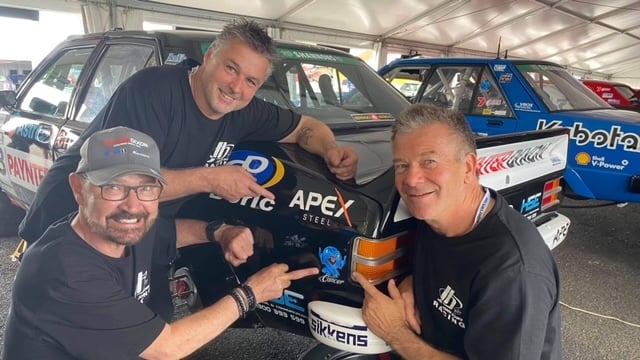 John Bowe has taken to social media to share a cheeky message intended to raise awareness about prostate health.

Bowe himself was diagnosed with prostate cancer this month, and is urging men over 40 years old to get their PSA (prostate specific antigen) test.

Furthermore, vehicles in the Gulf Western Oils Touring Car Masters series are now carrying stickers of a blue character giving two middle fingers to cancer, which have been printed by a sufferer.

For Bowe, the spotlight of this weekend’s Repco Mount Panorama 500, which Touring Car Masters supports, gives him the opportunity to push his message.

The two-time Bathurst 1000 winner is pleased to be able to continue racing during his period battling cancer, but admitted to tiredness after his races. 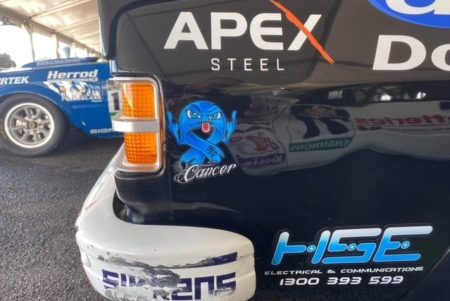 “Lots going on this weekend, and without denigrating the fabulous Supercars event, for me this has been about Prostate Cancer awareness so forgive me over the next few days if I keep pushing the message,” he wrote on Facebook.

“All our friends in Touring Car Masters and many others have committed their support. The anti-cancer stickers are being printed as I type, provided by Paul and Jamie Passaris. Jamie is very ill with a rare cancer of the bile duct, so we will pray for you Jamie!

“As for the racing, I’m so happy to be here racing around but feeling a bit buggered by later in the day!

“They tell me I’m not going to die so I’m happy about that!!!

“But the message is still this:  All blokes over 40, get your PSA blood test!

“Also congrats to Ryal Harris, the winner of the TCM race, and Van Giz for a superb Supercar victory.

PSA tests are recommended for men who exhibit symptoms consistent with prostate cancer which, according to the Cancer Council, include:

Cameron Tilley won the Trophy Race at Mount Panorama in his Valiant Pacer before Ryal Harris, on his return to Touring Car Masters, bagged Race 1 in a Peters Motorsport Chevrolet Camaro.