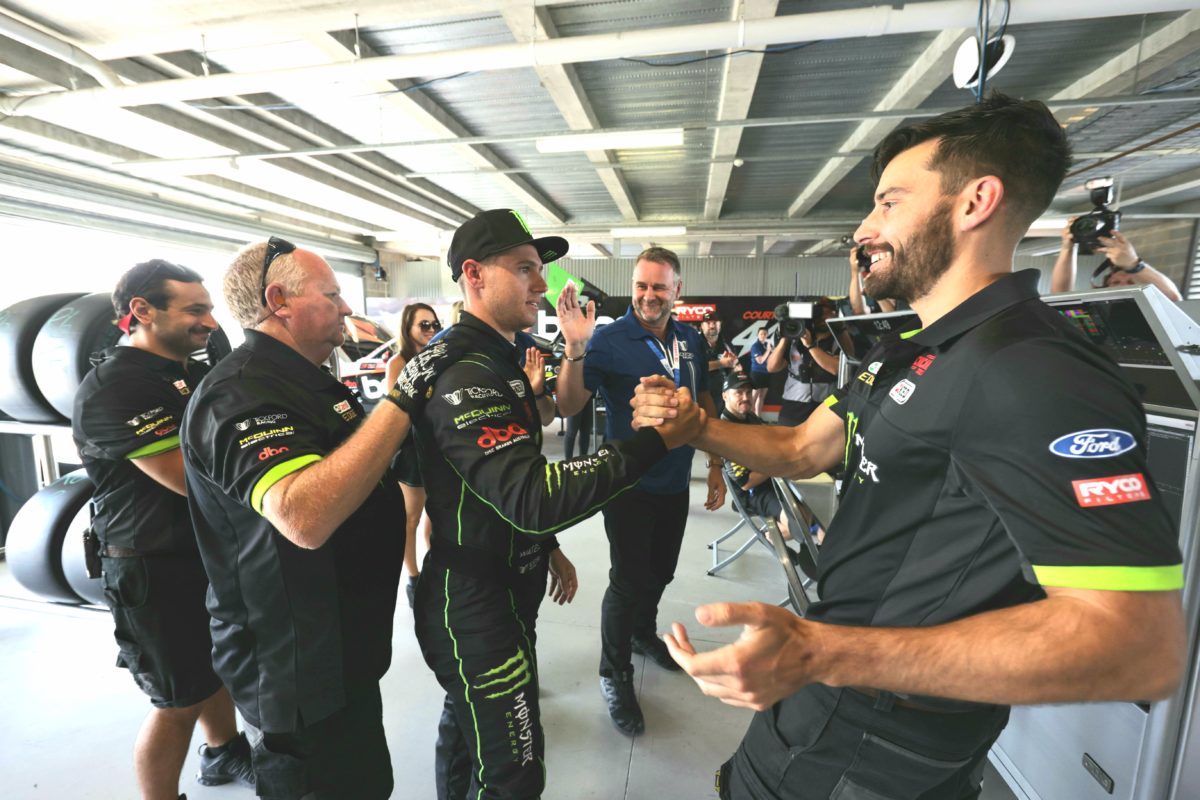 Cameron Waters has taken out the Top 10 Shootout at Bathurst for the second time in a row, grabbing pole position for Race 1 of the 2021 Supercars Championship.

The Tickford Racing driver wheeled the #6 Monster Energy Mustang to a 2:05.5980s which could not be beaten by the two who followed him onto the race track, namely Shane van Gisbergen and then provisional pole-sitter Anton De Pasquale.

Neither of those will in fact start from the front row in the opening race of the Repco Mount Panorama 500, with that honour for Tim Slade and the new Blanchard Racing Team.

Van Gisbergen ended up third and will share the second row with De Pasquale, ahead of Will Davison, Chaz Mostert, Jamie Whincup, Brodie Kostecki, and Team 18 pair Mark Winterbottom and Scott Pye.

The hot, midday conditions made life much more difficult than when Qualifying for Race 1 was run in overcast conditions just after 09:00 local time/AEDT, when De Pasquale managed to pull off a 2:04.4250s.

Several struggled for grip throughout their respective laps but Waters’ stood out as one of the tidier ones.

The 2020 Great Race pole-sitter was competitive to the first sector and set the fastest split across the mountain, before bringing what is a new car to the finish line at 0.1070s quicker than the previous fast man.

That was Slade, who went from a provisional fifth to the outside of the front row with a 2:05.7050s in the #3 CoolDrive Mustang.

Van Gisbergen looked to be working hard in the #97 Red Bull Ampol ZB Commodore, and while he was not fastest in any sector, the lap was consistent enough to yield a 2:05.7608s.

De Pasquale was fastest to the first sector but kicked up the dirt when he straddled the exit kerb at McPhillamy Park and ultimately achieved a 2:05.7793s in the #100 Shell V-Power Mustang.

“It’s an awesome way to start the year, the car rolled out really good in practice and we’ve just been fine-tuning it to get a little bit nicer.

“It felt pretty sketchy then, nice and slippery but got through [Turn] 1, made a little mistake and then just tried to do a clean lap after that.

“Super pumped to be starting off pole here again and it will be nice this time because I will actually be in the car, not Wilbur [Davison, then co-driver] like we did in October, so it will be cool.”

Next after De Pasquale is in fact ‘Wilbur’, who touched the wall at Griffins Bend on his way to a 2:06.0079s which was good enough for the next spot on the grid in the #17 Mustang.

Mostert was clearly wanting for grip at the start of his lap but salvaged a 2:06.0449s which leaves him sixth from a provisional fourth in the #25 Mobil 1 Appliances Online ZB Commodore.

Whincup went from a provisional ninth to seventh after dragging a 2:06.1164s out of the #88 Red Bull Ampol ZB Commodore, and will share Row four with shootout debutant Kostecki, who logged a 2:06.1814s in the #99 Erebus Boost Mobile ZB Commodore.

Winterbottom was first onto the race track and clocked a 2:06.5672s with roaded front tyres which puts the #18 Irwin Tools ZB Commodore ninth on the grid.

A messy first sector was costly for Pye, who dropped a full row from eighth in provisional qualifying having set a 2:06.9479s in the #20 DeWalt ZB Commodore.