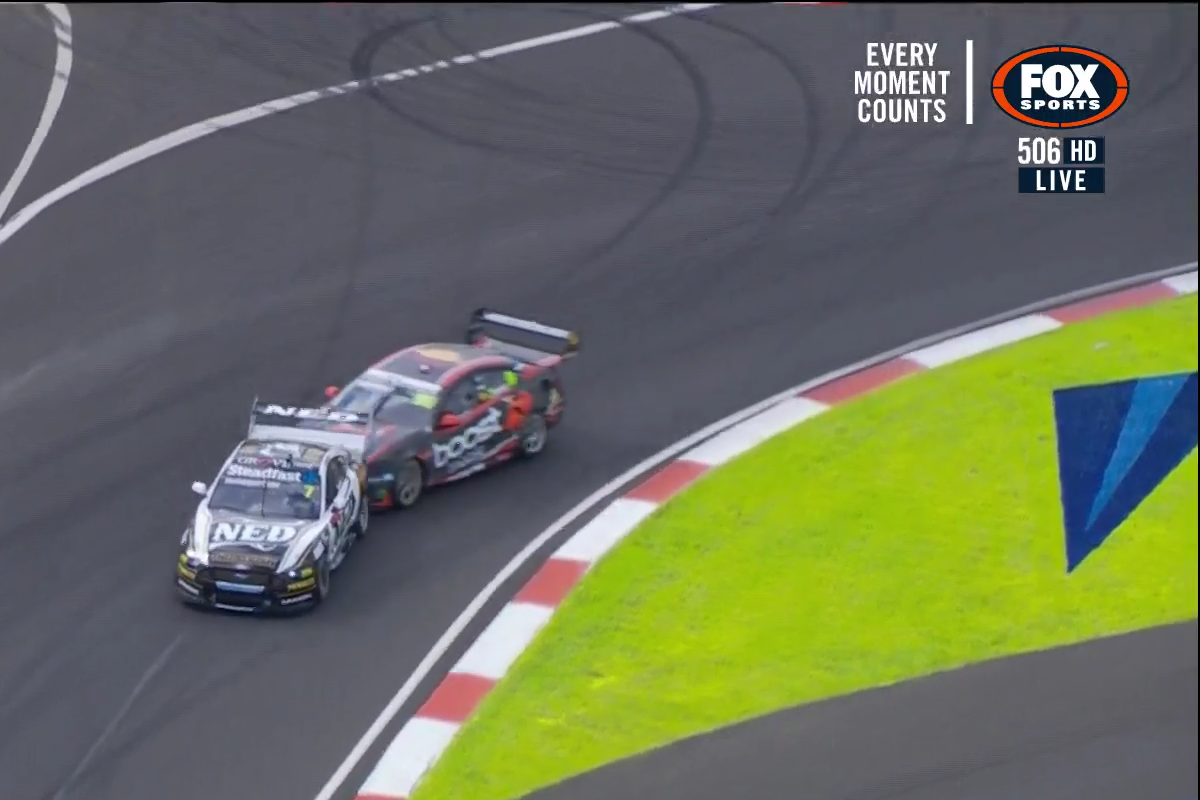 Heimgartner cuts across the front of Kostecki upon re-entry. Source: Fox Sports

Andre Heimgartner’s opening race of the season has come unstuck, copping a drive-through penalty for a dangerous re-entry.

Heimgartner had been running a solid eighth just after the midway point of the 40-lap race when he locked-up into Hell Corner and was forced to make use of the run-off area.

A flick spin got the Kiwi going again but, after waiting for a couple of cars to pass, he bowled out almost directly into the path of Brodie Kostecki’s oncoming Erebus Boost Mobile #99.

Lucky to avoid major contact, Heimgartner was quickly placed under investigation and subsequently issued a drive-through.

Kostecki lost a position as a result of the incident, having to back off and in doing so seeing a momentum-filled James Courtney blast past.

Having now served his sanction as well as his final compulsory pit stop, Heimgartner was in 18th position with 11 laps remaining.

The #7 Ned Mustang had earlier struck trouble when James Courtney nudged it wide at Murray’s Corner and Will Brown passed the both of them.

The sister Kelly Grove Racing entry of David Reynolds is running a little further up the field in 12th, having benefited from an early pit stop.

Brad Jones Racing driver Macauley Jones meanwhile has had to park in the garage, courtesy of engine dramas.

“Just going around after that pit stop, pretty much lost all power and the thing started to smoke up a bit,” said Jones.

“Not looking good for the engine in the car at the moment, it’s a bit of a shame really.

“They had a look down the pistons and it’s probably not looking great for it. I think we’re going to have to just wait and get more of a diagnostics on it later.”

BJR team-mate Nick Percat has also battled engine issues today, both in qualifying and the race.