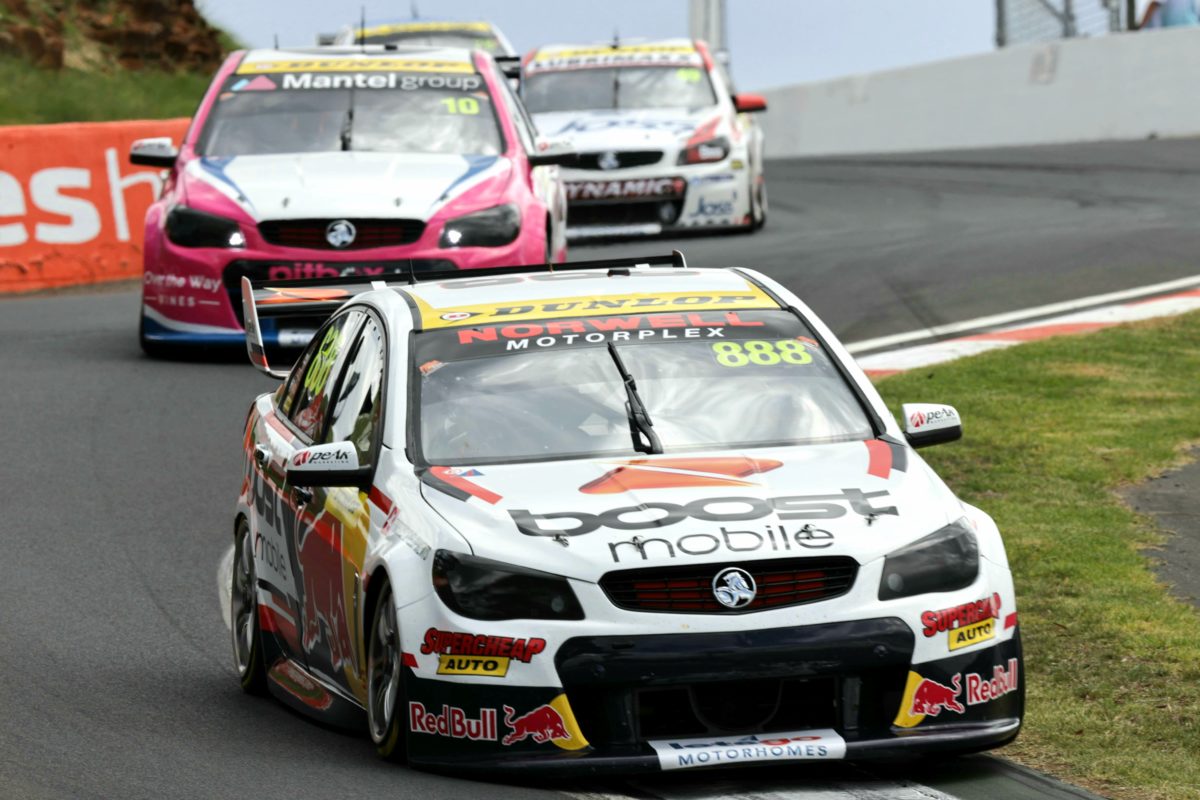 Feeney might have missed out on pole position and lost the start to team-mate Angelo Mouzouris but his race pace was superior and he never looked back after making the pass on Lap 4.

Mouzouris hung on for a career-best second position, greeting the chequered flag less than a tenth ahead of Image Racing’s Jordan Boys in a race which was shortened to eight laps due to dramas even before it had begun.

The first of those was for Tyler Everingham, who pulled off on the side of the main straight due to a clutch issue at the end of the formation lap. 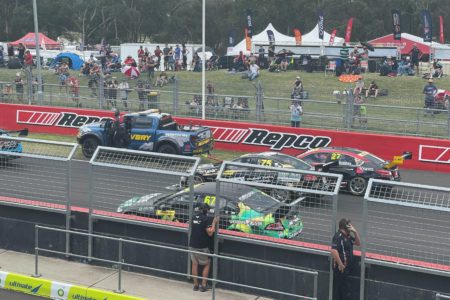 Tyler Everingham’s Altima is recovered before the start

With the #27 MW Motorsport Nissan Altima having to be towed away, the field was sent for another slow tour of Mount Panorama, but Super3 competitor Steven Page (#2 Eggleston Motorsport VE Commodore) then had to also be pushed off the grid.

The latter came under pressure from an also fast-starting Aaron Seton up Mountain Straight, but Seton was hung wide at Griffins Bend and instead ceded sixth to Zak Best.

Mouzouris straight-lined The Esses on Lap 2 as he came under pressure from the pack which had formed behind him.

Best was an obvious beneficiary of the bottling up of the field, passing both Ojeda and McLean when they went three-wide as Lap 2 became Lap 3 to take up fourth in the #78 Tickford Racing FGX Falcon.

McLean was a net unchanged fifth while Ojeda dropped two spots in the kerfuffle after those two hit exiting Hell Corner.

Mouzouris was still being hounded by Feeney when he went defensive at Murray’s Corner at the end of Lap 3, which gave his team-mate the run for Hell Corner and an easy pass for the lead.

The 2019 Super3 Series winner wasted little time in gapping the 2019 Australian Formula Ford title winner, clocking back-to-back fastest laps on Laps 5 and 6 to be almost two seconds to the good.

Feeney was 2.3s up at the start of the eighth and final lap, a cut of four laps due to time-certainty, and duly delivered Triple Eight’s first win in Super2 since 2012.

Mouzouris managed to keep Boys at bay in the battle for the minor placings, while Best finished fourth.

Ojeda came at McLean at The Chase on Lap 5 and the latter chose to sidestep a serious fight for fifth position.

Seton was running seventh when his #30 Matt Stone Racing VF Commodore lost power and he retired to pit lane.

Feeney’s series lead is 12 points over Mouzouris at this early stage, with Qualifying for Race 2 starting tomorrow at 09:30 local time/AEDT.