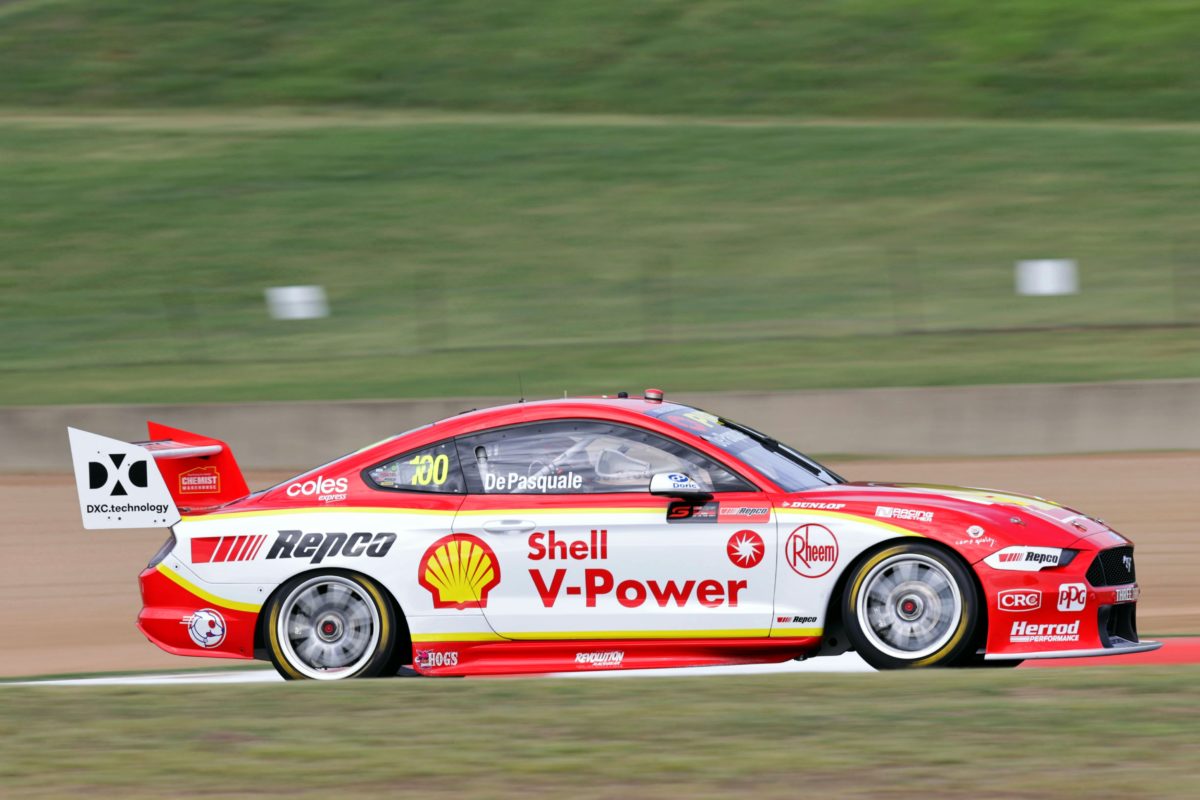 Anton De Pasquale has qualified on provisional pole for his first race for Dick Johnson Racing at the Repco Mount Panorama 500.

De Pasquale denied Shane van Gisbergen the final say in this afternoon’s Top 10 Shootout which finalises the grid for Race 1 of the 2021 Supercars Championship by punching out a 2:04.4250s in his #100 Shell V-Power Mustang with the chequered flag flying.

Van Gisbergen improved on his final lap, by a full two tenths of a second, but that was still only enough for a 2:04.5474s which left the Red Bull Ampol Racing driver in second spot.

Will Davison and Jamie Whincup ensured that DJR and Triple Eight Race Engineering, respectively, got both of their cars into the one-lap dash, while James Courtney (#44 Boost Mobile Mustang) just missed the top 10 thanks to Slade’s efforts.

Waters was shown on timing as shortcutting The Esses next time around, although it was not clear whether he made an error or was simply avoiding traffic given the incident was not captured on television.

Van Gisbergen, on the other hand, completed another lap and moved to the top with a 2:04.7580s in the #97 ZB Commodore which clearly excited his new engineer, David Cauchi.

Red flags flew inside eight minutes into the 20-minute hit-out in response to Nick Percat coming to a halt on Mountain Straight due to an engine problem in the #8 R&J Batteries ZB Commodore.

“Our goal this issue was to have no reliability issues and here we are,” lamented Percat.

“It’s disappointing. I think it’s had an electrical issue so as I came down Conrod it dropped to six cylinders, then four, then three, then shut off and I had battery alarms and no voltage and stuff like that.

“The best bit was reversing down [from pit exit into the lane itself], because it’s so steep I got all the way back.”

Scott Pye then got up to fourth but bailed out of his next lap while personal best to Sector 2 in the #20 DeWalt ZB Commodore, as the penultimate runs came to an end.

With the frantic final minutes to come, van Gisbergen was still quickest, ahead of Mostert, De Pasquale, Pye, Courtney, and Waters, while Whincup had slipped to ninth having made no improvement on his first flyer.

Courtney also cut The Esses on his final run, before van Gisbergen moved the marker to a 2:04.5474s just after the chequered flag was unfurled.

However, De Pasquale had enough to elevate himself from fifth to first with a margin of 0.1224s over the 2020 Bathurst 1000 winner, pushing Waters back to third.

“It was good,” said De Pasquale.

“We were struggling a bit yesterday but we put in a big effort overnight. The Shell V-Power guys did a good job, the car was a bit more to my liking…

“We sort of chipped away at it and as the session went on we went aggressive with it and here we are.”

Mostert ended up fourth while Slade claimed fifth with one of the later laps, bumping Courtney to 11th.

Brodie Kostecki got as high as third before winding up sixth in the #99 Erebus Boost Mobile ZB Commodore, with the top 10 rounded out by Davison (#17 Mustang), Pye, Whincup, and Mark Winterbottom (#18 Irwin Tools ZB Commodore).

Bryce Fullwood was 12th in the #2 Mobil 1 Middy’s ZB Commodore and David Reynolds 13th in his first qualifying session in the #26 Penrite Mustang.