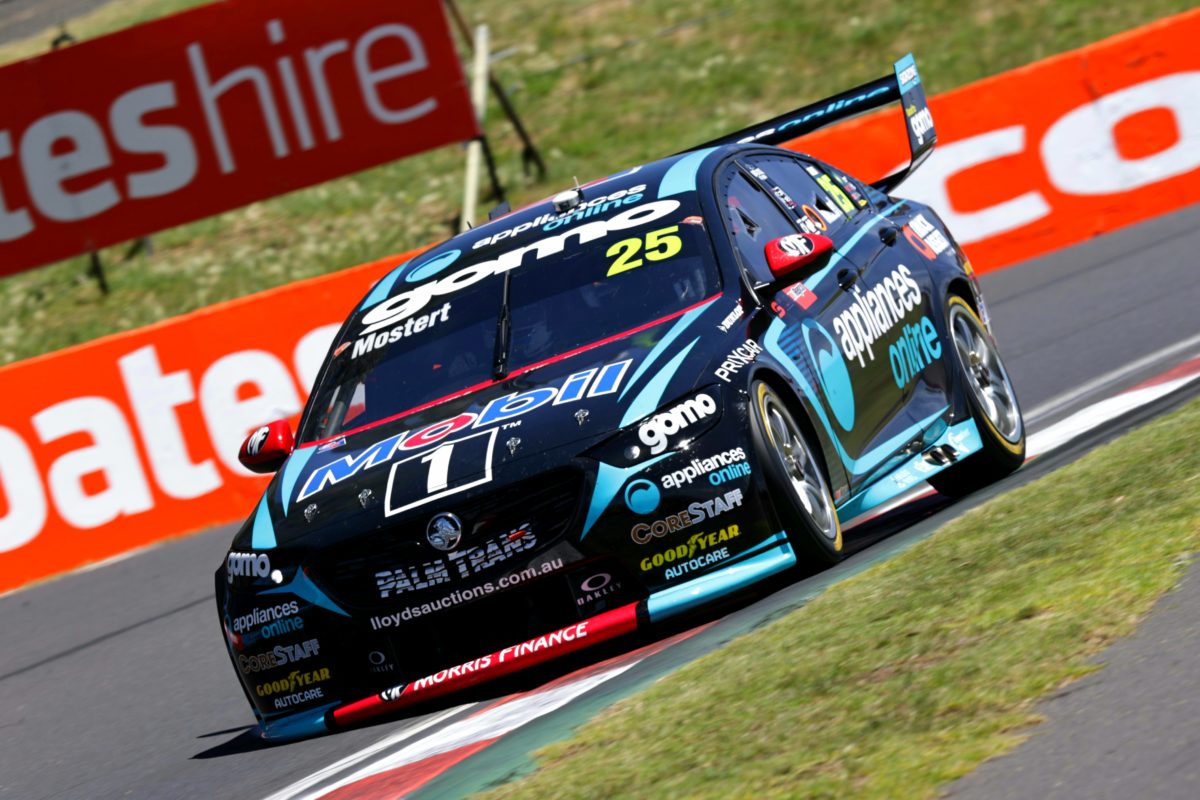 Chaz Mostert has set the pace by a margin of almost half a second after a late flyer in Practice 1 at the Repco Mount Panorama 500.

The Walkinshaw Andretti United steerer knocked off both of the Red Bull Ampol Racing drivers, Jamie Whincup and Shane van Gisbergen, when he nailed a 2:05.2056s in the final minute of the hour-long session in his #25 Mobil 1 Appliances Online ZB Commodore.

Mostert’s old team-mate, Cameron Waters, similarly moved to second with a 2:05.7054s in the #6 Monster Energy Mustang, while Bryce Fullwood (#2 Mobil 1 Middy’s ZB Commodore) made it both WAU cars in the top three with a 2:05.8534s after the chequered flag.

Whincup (#88 ZB Commodore) ended up fourth and Andre Heimgartner (#7 Ned Mustang) fifth, while long-time fast man van Gisbergen (#97 ZB Commodore) drifted to 12th having appeared to not go for a green tyre flyer at the end.

Will Brown was 15th all told, having crashed the #9 Erebus WD-40 ZB Commodore just over half an hour into the first Repco Supercars Championship practice session of the year.

The Super2 graduate had in fact been fastest just after the hit-out got going under sunny skies with a 2:07.7400s on his first flyer.

In the second runs, Mostert climbed to second with a 2:06.7973s and Brown improved to 2:06.8280s to be a net unchanged third, while van Gisbergen’s benchmark stood.

Erebus Motorsport had a wild period just after the halfway mark, firstly when Brodie Kostecki (#99 Boost Mobile ZB Commodore) escaped without damage despite a lurid spin at The Chase.

No sooner had he done so, however, was team-mate Brown in the concrete exiting The Dipper.

Replays showed that the Toowoomba pilot glanced the inside wall at the left-hander, which cannoned Car #9 into a sizeable hit on driver’s right before it came to rest.

With the addition of the extra 10 minutes, a net handful of seconds were lost before the field was let loose again.

Mostert threatened to steal first position when he went fastest to the second sector with a touch over 10 minutes to go, but improved only to a 2:06.7459s in the end.

However, the 2014 Bathurst 1000 winner had not taken greens on that run, and when he did, he rolled out what would be the fastest lap of the piece.

“I don’t know who ran tyres and who didn’t out there,” said Mostert.

“We obviously want to try and get the confidence up nice and early in the weekend. Something about practice at Round 1 with this team, we seem to shine always, like last year.

“The car felt pretty good, we made some changes throughout the session, felt like it was positive. The feedback of the car and the tune-ability is something we didn’t quite have last year which is something that seems to be working today.

“We’ll see what happens in the next one and keep trying to build confidence in sessions to come.”

Finishing up just outside the top five was Pye, from Slade and Anton De Pasquale, the latter of whom appeared to have a particularly nervous #100 Shell V-Power Mustang early in the session.

The new Dick Johnson Racing driver also had a close call with van Gisbergen in the latter stages, when the New Zealander looked at one point to go through at The Chase, but no harm was done.

James Courtney (#44 Boost Mobile Mustang) was last within a second of Mostert in ninth, and David Reynolds (#26 Penrite Mustang) rounded out the top 10.

Will Davison (#17 Mustang) was 11th in the second of the DJR entries, ahead of van Gisbergen and Todd Hazelwood (#14 Dunlop Super Dealer ZB Commodore).