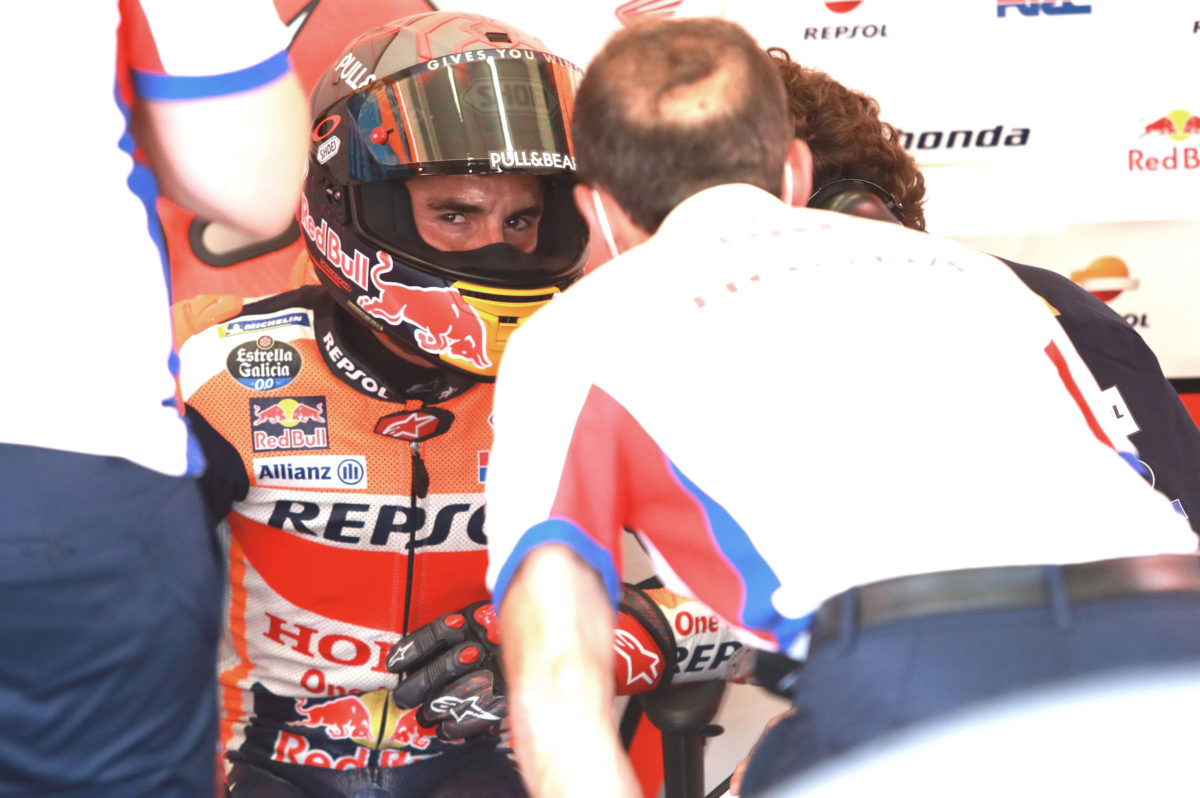 Marc Marquez is not singling out anyone for blame over his attempt to race just days after surgery on a broken arm, but acknowledges his was the final decision.

Having sat out all but the first two rounds of 2020 entirely, the six-time world champion is now in danger of missing the start of the 2021 campaign, although he has so far only ruled himself out of pre-season testing.

Marquez had crashed heavily in last year’s opening race at Jerez as he charged back through the field after an earlier mistake, and underwent surgery on a broken right humerus on the Tuesday which followed.

However, he managed to pass a fitness test upon his return to Jerez on the Thursday and entered the second round that weekend, only to abandon that endeavour during qualifying.

Another operation followed barely a week later again after the Repsol Honda rider broke the titanium plate which was inserted during the original procedure.

That drama was said by Alberto Puig to have been caused by trying to open a door/window at home, although the Honda team boss admitted that riding again at the Andalucian Grand Prix probably stressed the plate.

Marquez then required further surgery last December to have bone grafted from his pelvis to the humerus in question, which had become infected and was exhibiting pseudarthrosis (false joint).

MotoGP medical staff, Puig, and Marquez have all come in for criticism for how the saga has been handled, but the 28-year-old is not pointing the finger at anyone in particular, with the possible exception of himself.

“In the end it was a decision of everybody,” said Marquez.

“When we won a title, we always speak about team and the people around me. When we do a mistake, we must speak about everything.

“Of course, the last decision is mine. But when me, Honda and my team receive a good feeling from the doctors, then of course you try.

“You know how riders are. If they say you can try, then they try. I felt I was able to try, but what I felt was not what my body needed.”

Marquez was at less than full fitness for the last two pre-seasons, both of which followed shoulder surgery.

He has promised not to be “aggressive” with his recovery this time around, despite how he has bounced back from previous injuries.

“I don’t want to push the doctors,” added the Spaniard.

“This is another experience for me in my personal side for the future. Inside the track I will take the same risks, but I learned a few things.

“One of them is that it’s not the most important thing to come back as soon as possible. We did a mistake to come back in Jerez. We must accept that mistake.

“It was a consequence of many things. But in the end the last decision was mine. I felt that I was able to do it. But I learned from that situation for the future.

“Luckily for me it’s going in a good way now.”

Stefan Bradl is likely to ride in Marquez’s place if he does miss races at the start of the 2021 season.