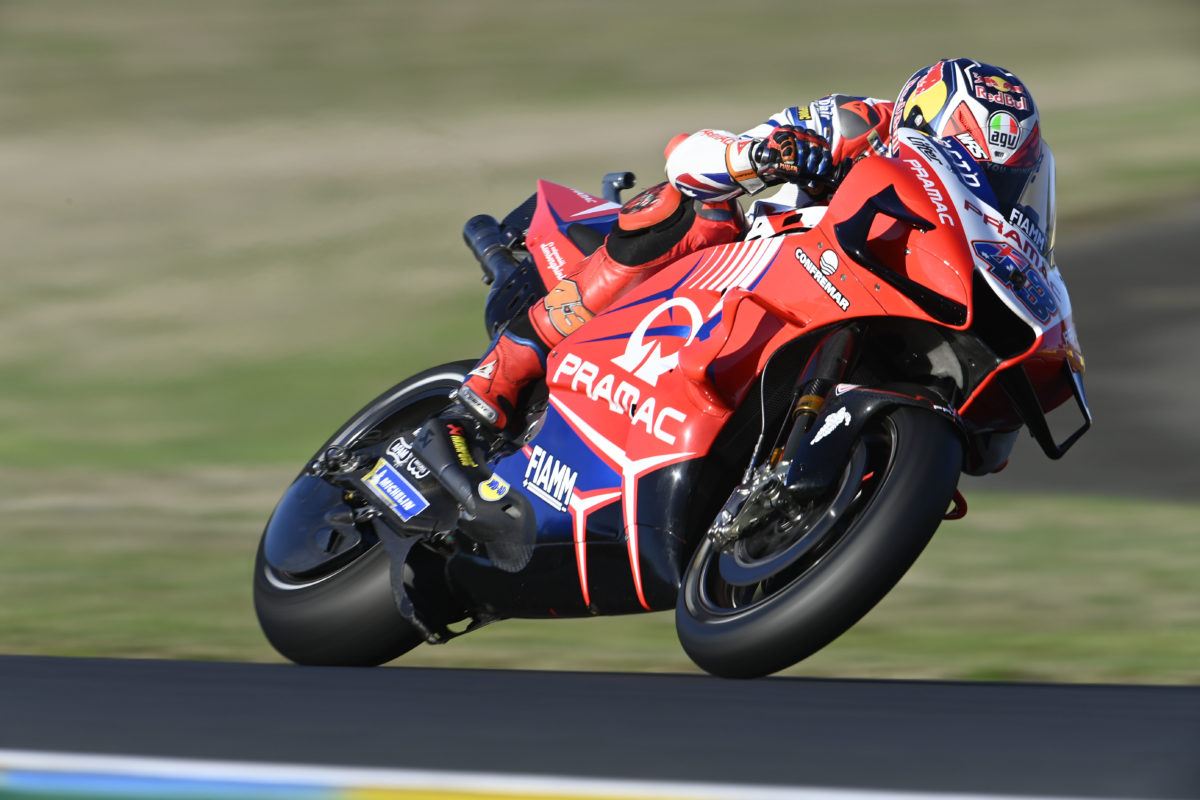 Jack Miller is the favourite for this year’s MotoGP championship title, according to factory Yamaha rider Maverick Viñales.

Miller is about to embark on his first season with the works Ducati Team, where the presence also of Francesco Bagnaia makes for an all-changed race rider duo.

The Queenslander finished a career-best seventh in last year’s championship, in his third and final season for Ducati satellite team Pramac Racing, but might have been much higher if not for three unfortunate DNFs.

He also finished runner-up in each of the final two races of 2020, missing victory by less than a tenth of a second in the former of those to satellite Yamaha rider Franco Morbidelli, at Valencia.

Asked who is the ‘main contender’ for the championship this year, Viñales nominated #43.

“I think Miller can be one of the guys because he was doing really well last season and understands well the strong points of the Ducati.

“But I think all four Yamahas can be on the top, so we will try to bring Yamaha in the first places.

“Normally we start so strong but somehow we didn’t keep that level. Our competitors improved and we didn’t improve,” he added.

“We will try this year to give the maximum every race, because on a few tracks we are unbeatable but then others we cannot finish in the top five, so we will try to make more consistency and I think all the Yamaha staff worked very this winter.”

The Spaniard’s comments come after Ducati test rider Michele Pirro argued that a title charge for the men in red will depend on the riders’ abilities to match their Suzuki counterparts, following Joan Mir’s 2020 triumph.

Mir’s consistency played a big part in taking out the championship given he only scored one grand prix victory, and was one of nine distinct race winners in a 14-round season.

Miller was not among those nine, but his three second placings and one third placing meant he was among the 15 different podium finishers.

With the rapid turnover on the rostrum last year, Viñales’ new team-mate, Fabio Quartararo, quipped that “everybody” is a chance of taking the crown in 2021.

Expanding on that, the Frenchman noted, “Miguel at the end of the year was really strong; Jack, Franco, Maverick, Mir, Rins there are so many people…

“I remember last year in Brno [Free Practice 3, Round 3], I think the six manufacturers were all in the top 10 and covered by 0.3s. If you make a small step in the pace you can fight for the championship, if you are consistent.

“So, at the moment, it’s so difficult to know who is the contender; of course, many.

“It looks like everybody has a big chance, also Pecco [Bagnaia] can be a really big contender because in many races he was really fast.

“It’s so difficult to know which one to choose. I can tell you easily 10 to 12 contenders.”

But for the possibility of wildcards for test rider Cal Crutchlow, there will be four Yamahas on the MotoGP grid again in 2021, with Valentino Rossi joining Morbidelli at SRT after effectively swapping seats with Quartararo.

The Shakedown Test takes place at Losail on March 5, followed by the first Official Test at the Qatar circuit on the next two days.