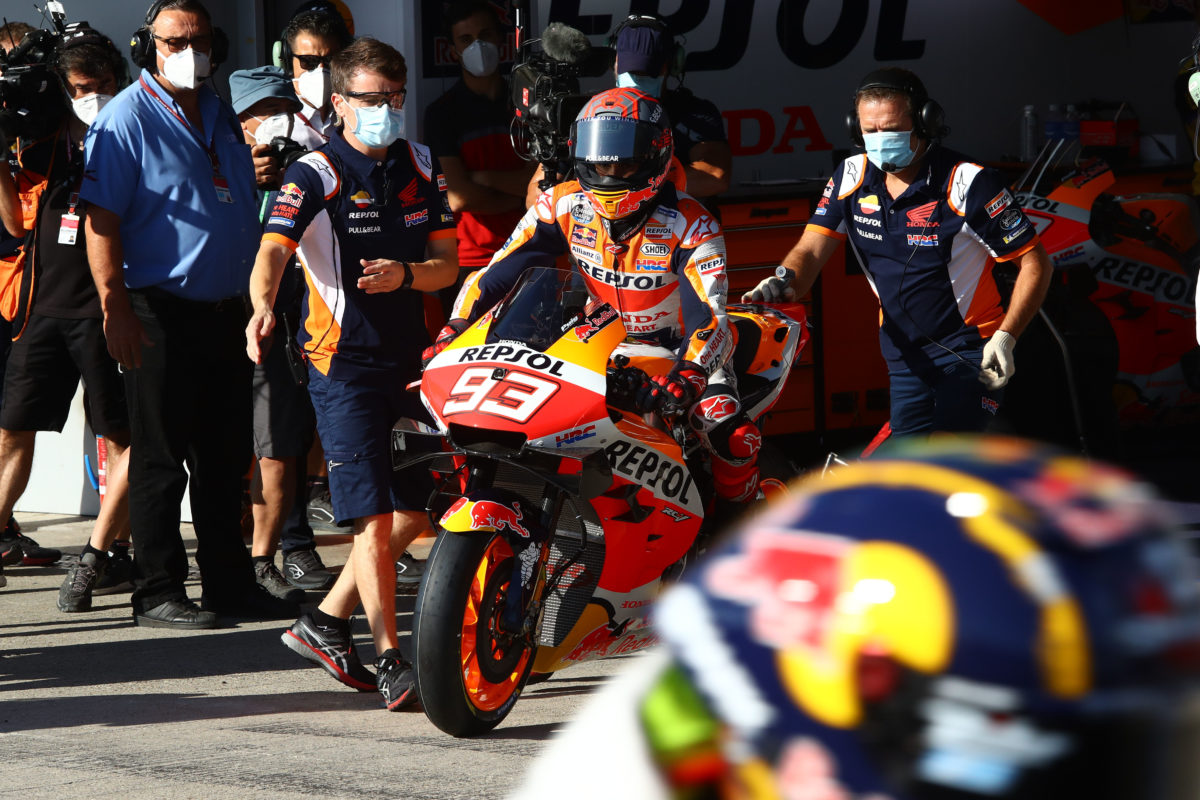 Valentino Rossi “doesn’t understand” how Marc Marquez was allowed to ride again only days after surgery on the arm he broke in last year’s MotoGP season-opener.

It was on the next weekend that he attempted to contest the Andalucia Grand Prix, also at Jerez, partaking in the two Saturday practice sessions before calling off the endeavour at the start of qualifying.

The Repsol Honda rider was back on the operating table just over a week later again, and also in December, having had to sit out the rest of the season.

Rossi compared the Marquez saga to the case of Jorge Lorenzo, who rode with a broken left collarbone at the 2013 Dutch TT.

Lorenzo had crashed heavily in Thursday practice and flew back to Barcelona for Friday morning surgery, before returning to Assen that afternoon and managing to finish fifth in the race which was held the next day.

According to Rossi, Dorna’s response to that feat meant that Marquez should not have been allowed to attempt his comeback at Jerez.

“This mistake was wanting to run again too soon as soon as the operation [ended], and I don’t understand how they allowed it to happen,” the Italian told Corriere della Sera.

“With the return of Marquez, they all jumped at once, surely like never before.”

While the stated explanation for the second operation from Repsol Honda team manager Alberto Puig was that Marquez broke the titanium plate in opening a window/door, conjecture has arisen about that claim.

In the event that the six-time premier class champion misses the start of the 2021 campaign, test rider Stefan Bradl would most likely take his place.

While Rossi is sympathetic that Marquez is out due to injury, the veteran still holds ill feeling around how the 2015 season ended.

Tensions between the two reached a flashpoint with the infamous clash at Sepang, for which Rossi attracted a penalty which saw him start the season finale from the back of the grid.

In what was a wide-ranging interview, ‘The Doctor’ was diplomatic about whether it was ‘nice’ to not have Marquez on the grid, saying, “I feel really bad that he can’t race.

“If he gets better, something no one knows right now, not even him, he’ll be as strong as before.

“But Marquez wasn’t the strongest opponent I met.”

However, the seven-time premier class champion, who believes that Marquez was acting to help Lorenzo’s title bid in 2015, also remarked that it is “Impossible to forgive him [Marquez].

“What he did to me can’t be forgiven.

“When I think back to those days, I have the same feelings. And it’s been six years.

“I don’t think those will change.”

Pre-season formally begins with a Shakedown Test at Losail on March 5 (local time), followed by the first Official Test over the next two days.