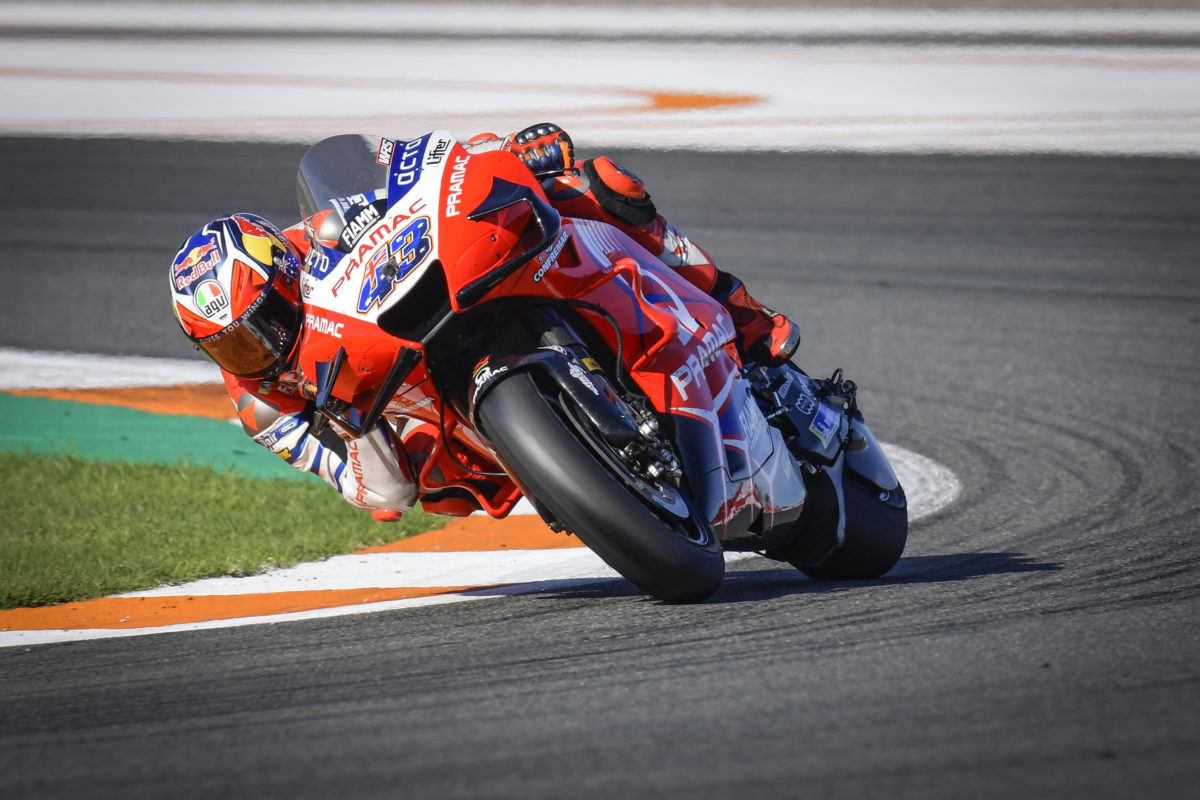 Ducati test rider Michele Pirro has suggested that Jack Miller’s ability to match Suzuki’s riders will be decisive if the Australian is to win this year’s MotoGP championship.

Joan Mir came out on top in the 2020 season, giving Suzuki its first championship in two decades, while team-mate Alex Rins finished third in the standings.

Ducati’s best was Andrea Dovizioso in fourth, with he and Danilo Petrucci each picking up one victory for the Italian manufacturer.

However, the former finished on the podium on only one other occasion during 2020 and while Ducati won the constructors’ championship, a penalty for Yamaha’s use of non-homologated engine valves, as well as the decision to take the illegal engines out of its rotation, proved critical in that contest.

Pirro nevertheless reasoned that it is the riders who will make the difference this year, when Miller and Francesco Bagnaia begin their stint at the factory Ducati Team.

“The Suzuki is a balanced bike, with two excellent riders, capable of finding the right balance very quickly,” he told Italian outlet GPOne.com.

“The fact is that when the opponents managed to get things into shape, they were on the same level as Rins and Mir.”

Pirro added, “The Ducati does not have to get to the same balance as the Suzuki.

“It is the Ducati riders who in 2021 will have to achieve the balance of Rins and Mir.

“In fact, in 2020 the Ducati proved to be a competitive bike with which all the riders could aim for good results.”

An inability to come to terms with Michelin’s new construction of rear tyre, and ongoing poor handling, were cited as reasons for why Ducati apparently battled last year.

Pirro, however, refuted such theories by drawing attention to the consistency with which at least one Ducati was at the pointy end of the field.

“I honestly can’t understand when sometimes the finger is pointed at Ducati,” said the Italian.

“It is true that there are some aspects to improve, such as turning, but to date the Ducati is the most balanced bike in MotoGP.

“Look at the results of last season: in all races, with the exception of Aragon 2, there was always at last one Ducati fighting for the podium or even for the win.

“I would really like to emphasise this and it would be nice if an article was written on this aspect, namely that the Ducati was the only bike capable of fighting for the podium practically every race weekend.”

Pirro’s argument appears reasonable based on further examination of 2020 results.

Miller finished on the podium four times, riding for Pramac Racing but on what was a latest-specification Desmosedici GP20.

The Queenslander ended up only three points behind Dovizioso all told, albeit three positions back in a congested part of the table, and three of his four DNFs were down to at least some element of bad luck.

Rain forced Miller onto a faulty bike at Le Mans, he was taken out on Lap 1 in Aragon by Brad Binder, and back at Misano it was a stray tear-off which suffocated his engine.

Based on an average of 12 points per race in the other 11 rounds, including account of the rider error in crashing at Jerez, Miller’s 39-point deficit to Mir could have been so much slimmer.

Furthermore, Mir’s title was achieved by virtue of consistency rather than dominance, with his first win not coming until just before clinching the championship.