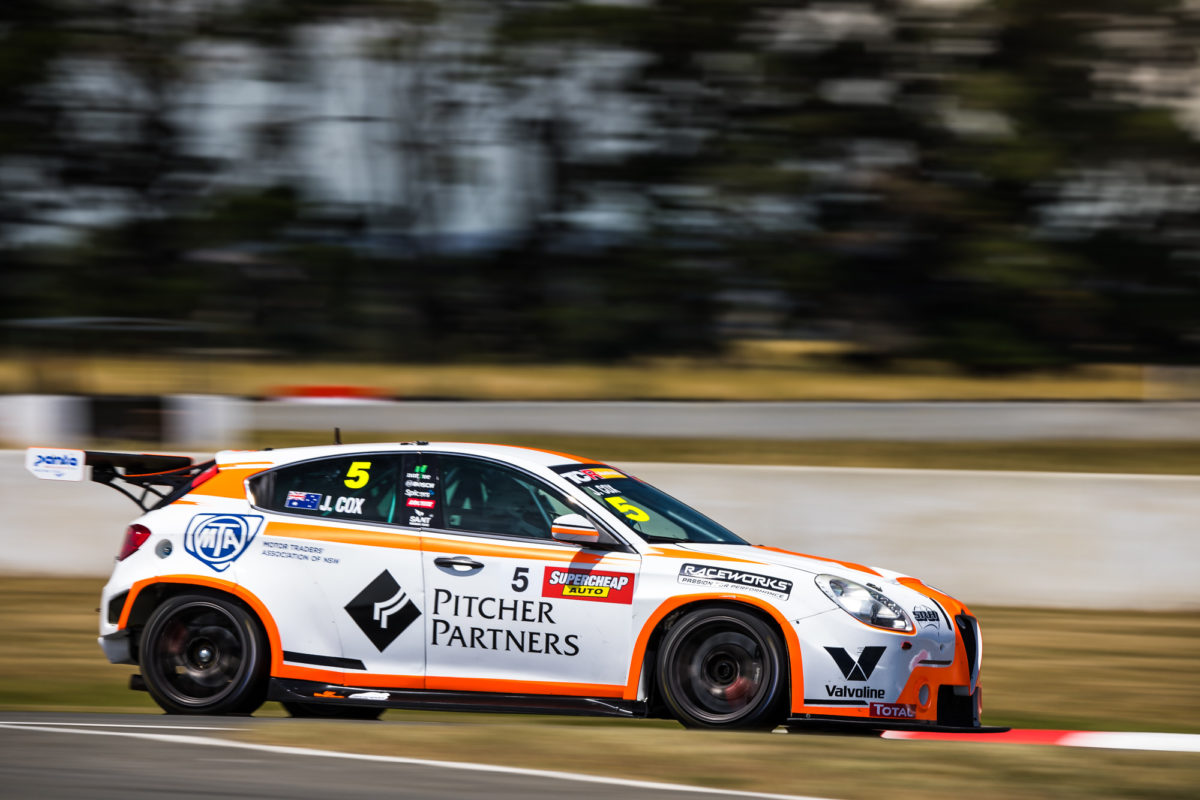 Jordan Cox has won Race 2 in Round 1 of the Supercheap Auto TCR Australia Series at Symmons Plains while Michael Caruso was out early due to a crash.

Cox regained top spot midway through the 22-lap encounter at Boost Mobile Race Tasmania when Aaron Cameron ran wide, and went on to claim a first victory in the category by just under a second.

Lee Holdsworth (Ashley Seward Motorsport), in another Alfa Romeo, finished in second place after prevailing in the opener on the afternoon prior, and Chaz Mostert completed the podium in an Audi.

With a progressive grid, Cox and Holdsworth shared the front row and it was once again the former who got the jump out of those two.

Cameron, however, got a rocket launch from fourth on the grid and split the Giuliettas at Turn 2 after they bumped on the way to the first stop.

The Peugeot driver was at the very front when he outbraked team-mate Cox at the end of the back straight, but the race would be neutralised a short time later due to a tangle between another two Garry Rogers Motorsport entries.

Michael Caruso appeared to turn across Dylan O’Keeffe’s Renault at the end of the standing lap, which saw his Alfa Romeo fired into the wall on driver’s left, and a Safety Car which lasted until the end of Lap 6. Cameron briefly got as far as a second clear in the laps after the restart but had Cox and Holdsworth on his tail when he ran wide at the hairpin on Lap 14 and ceded first position.

Worse was to follow when the #18 GRM entry slowed at the end of the same lap, a drama which elevated Holdsworth to second and Mostert to third.

Cox moved his advantage past 1.6s at one point and was not threatened thereafter, nor did Holdsworth appear to have much to worry about from Mostert.

The latter started from sixth after being taken out by Jay Hanson (Alfa Romeo) a day earlier, and grabbed a spot from Melbourne Performance Centre team-mate Luke King (Audi) at the hairpin on Lap 1.

Mostert gained another when Josh Buchan ran wide at Turn 6 on Lap 8, and moved up to third once Cameron’s Peugeot suffered its technical issue.

Joining Caruso as non-finishers were Hanson and James Moffat (Renault), after Moffat shunted into the teenager at the hairpin on Lap 9.

“I probably will have to look at the replay,” said Moffat.

“Both [Hanson] and I got a run on that Hyundai [of Buchan] on the run up to the hairpin and it kind of felt like the Hyundai squeezed me a bit.

“I had it all under control and then all of a sudden… I don’t know if he squeezed me a bit into the dirt.

“I don’t really want to apportion blame to anybody until I have a look at it but it’s taken Jay out which is unfortunate for that to happen.”

The final TCR race of the weekend is due this afternoon at 15:27 local time/AEDT.