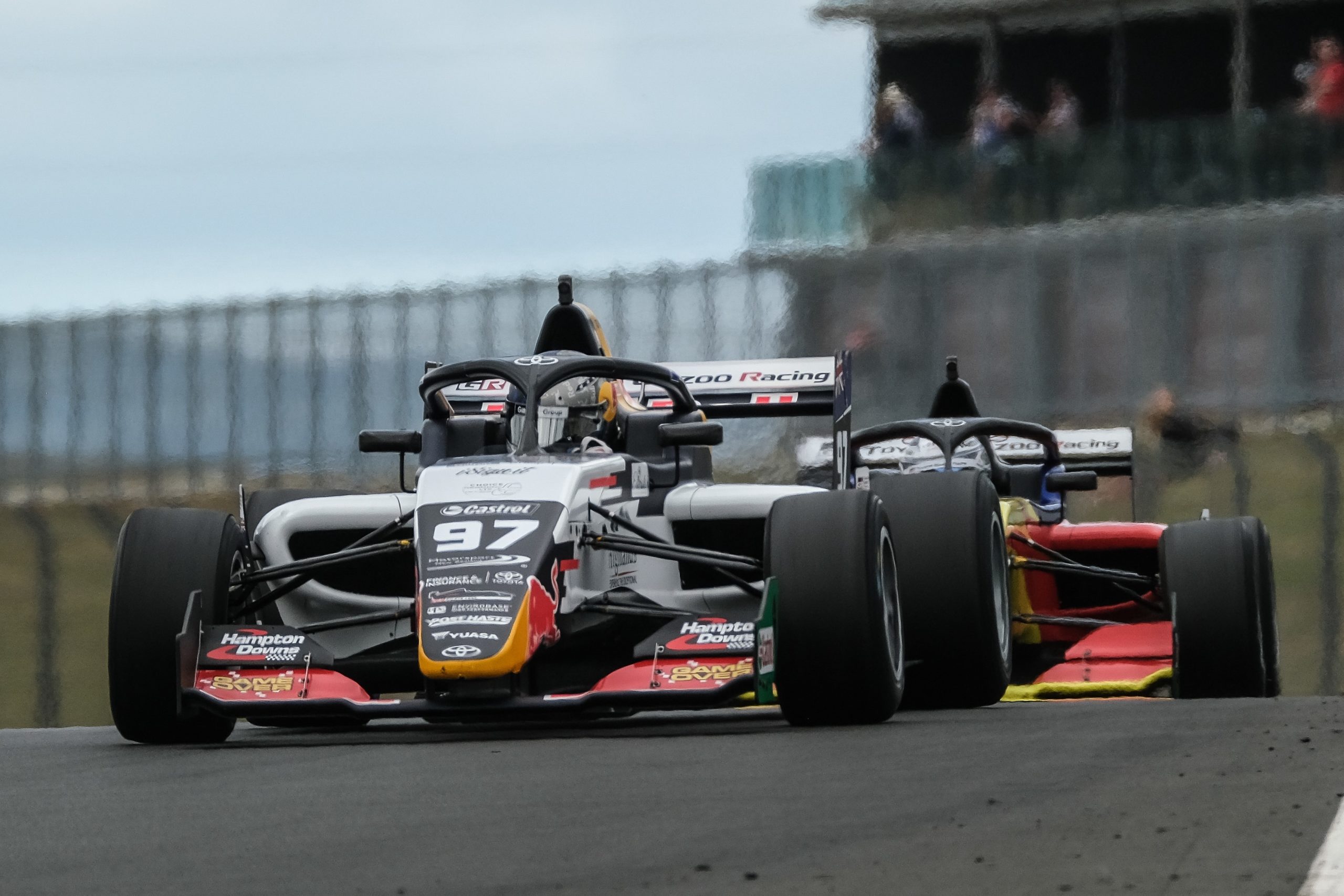 The Supercars regular will be hard-pressed to repeat his opening efforts in the weekend’s feature New Zealand Grand Prix, however, starting from 10th after a wet qualifying.

“It was awesome, but this afternoon is going to be hard starting 10th,” said the Kiwi.

“I really struggled at the start. We put some other brake pads in, my old ones, so I couldn’t get the balance.

“I was locking brakes, Chris was all over me, but we’ll put the good pads in for this afternoon when we need to pass some people.

“Awesome to see a big crowd here. Tony [Quinn] and his Hampton Downs team, they should be stoked with what we’ve got here. It’s an awesome event.

“I’m going to be passing some cars this afternoon hopefully. I hope it’s a good show.”

Behind them, Brendon Leitch got a strong getaway from fifth on the grid to usurp third and fourth place starters Matthew Payne and Kaleb Ngatoa.

Ngatoa was a slow starter, falling to seventh by the end of Lap 1.

Billy Frazer made headway on the opening lap, climbing to fifth behind Payne while Dan Gaunt was sixth.

Peter Vodanovich, Andre Heimgartner, and Greg Murphy completed the top 10 at the end of the first lap.

Murphy was an early casualty in the race, suffering front wing damage after making contact with Heimgartner in the opening proceedings.

The four-time Bathurst 1000 winner was subsequently given a mechanical black flag, deciding to retire from Race 2.

At the front of the field, van Gisbergen and van der Drift traded fastest laps, the margin toing and froing.

Their battle was stalled when Tom Alexander beached his car on Lap 8 on the exit of the Double Bastard and duly brought out the Safety Car.

The pair went side-by-side into Turn 2, which brought Leitch into the battle. However, the order stabilised.

Further afield, Gaunt suffered front wing damage after making contact with Payne as he sought to take fourth. Like Murphy, Gaunt brought his race to a premature end.

The dying stages of the race saw Leitch fall into the clutches of Payne. As they battled, Heimgartner came into play.

Payne sought to make a move at the Dipper, getting alongside Leitch. As they went side-by-side into the final turn, Heimgartner tried to go around them both.

Leitch hung Payne out to dry, allowing Heimgartner to come through. However, Payne was given a free-kick when Leitch and Heimgartner made contact at the Turn 2 hairpin.

The pair both suffered damage and were forced to retire from the race.

With Heimgartner’s car too damaged, he stopped on track and the Safety Car was subsequently brought out.

In the end, van Gisbergen crossed the line under the control of the Safety Car with van der Drift second and Payne third.