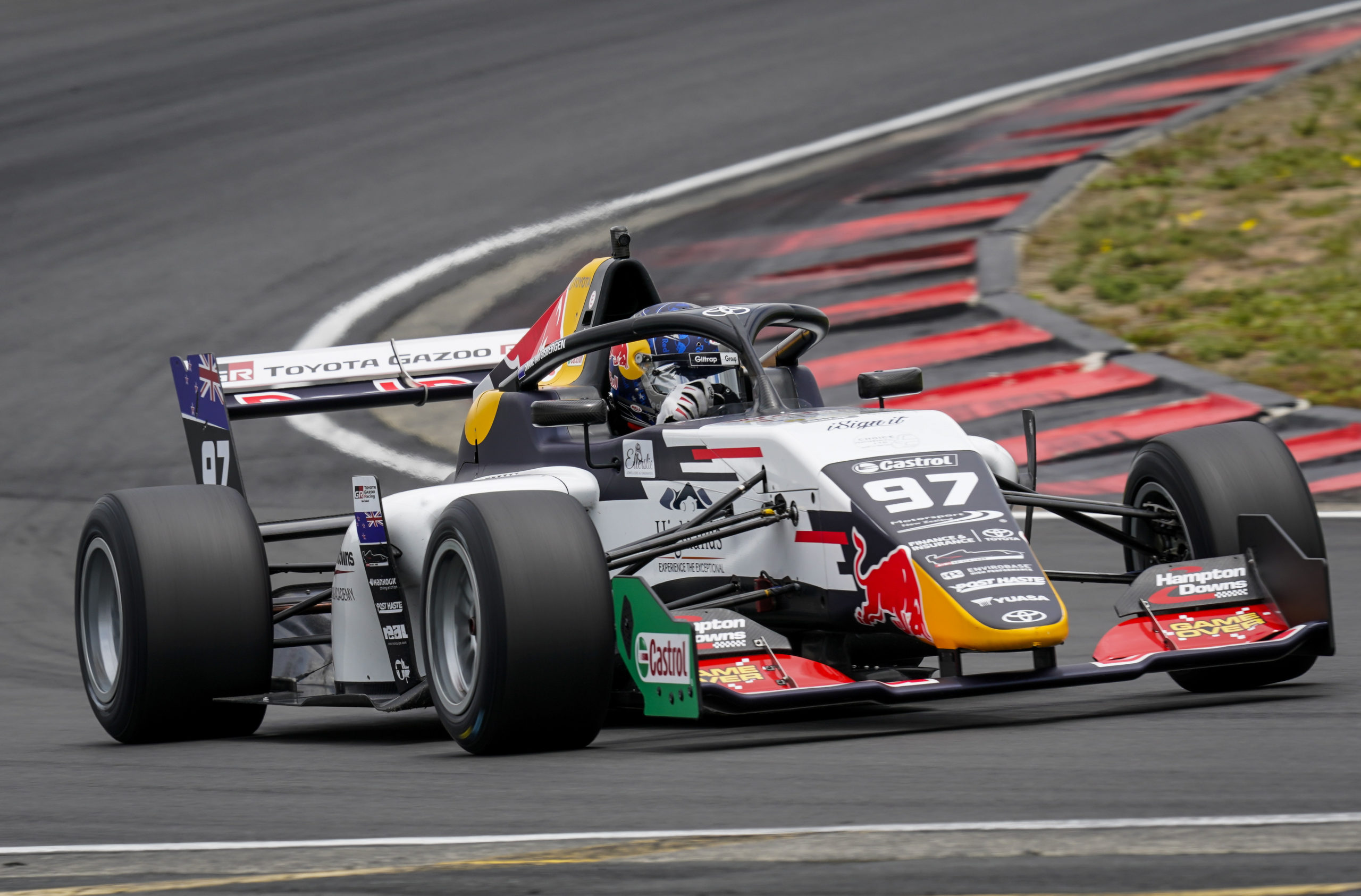 Van Gisbergen started from the front row alongside Chris van der Drift, who led the field through the opening stanza.

However, with seven laps to go the Red Bull-backed driver launched an assault on van der Drift, completed a pass, and was unchallenged thereafter.

“Pace was good and the race with Chris was awesome,” said van Gisbergen.

“I managed to hunt him down, put a pass on him, and then he sort of started to come back.

“It was really cool. I enjoyed that. It’s a long way, 28 laps tomorrow is going to be tough.

“He doesn’t make many mistakes. He made a couple, and then I got to him, and then took the only chance I got. It worked out really well.

“We’ve just been tweaking away, little changes to the car and it’s pretty close now so a couple of things and we’ll get there.

“There’s another quali in the morning. That’s going to be super important. I haven’t learned how to get the best out of the tyre. I need to be there right away. It’s pretty awesome.”

Initially, it was van der Drift who got the holeshot into Turn 1 with van Gisbergen in tow.

Brendon Leitch was a fast starter, climbing to fourth by the first turn. Meanwhile, Payne was slow away and fell to fifth while Ngatoa edged forward to third.

A wide run by Ngatoa through Turn 2 allowed Leitch to get alongside the Marton-born driver and complete a pass out Swampy Curves.

Payne was quickly back into fourth after Ngatoa went wide out of Turn 1 and onto the grass, falling to fifth.

The front runners began to trade fastest lap times, van Gisbergen the quicker of the two as he began to eat into van der Drift’s lead.

Ultimately, van Gisbergen got to the rear of van der Drift and launched an attack at the Dipper and take the lead.

While van Gisbergen and van der Drift stretched their legs, Leitch in third began to fall into the clutches of Payne.

With six laps to go, Payne showed his nose on entry to the Double Bastard. Leitch went wide and gave Payne enough room to sneak through.

With the pass complete, Payne sprinted away and left Ngatoa to challenge Leitch for fourth.

Ngatoa looked threatening, but the Invercargill-born maintained position through to the chequered flag.

In the end, van Gisbergen came home half a second clear of van der Drift to win the opening race of the season.

Payne completed the podium in third, seven seconds adrift of the leaders. Meanwhile, Leitch was fourth and 13 seconds in arrears with Ngatoa not far behind.