Johnson ‘very proud’ to bring Tru-Blu back to Symmons

Johnson ‘very proud’ to bring Tru-Blu back to Symmons Tru-Blu with a Trans Am, S5000, and TCR car at Symmons Plains Picture: Australian Racing Group

Taking a Tru-Blu back to Symmons Plains is “a very proud moment” for his family, according to Steven Johnson.

With just one Gulf Western Oil Touring Car Masters round last year due to the COVID-19 pandemic, this weekend’s season-opener represents only the second competitive outing for the Team Johnson XD Falcon.

While its only other event start thus far was on the streets of Adelaide, Round 1 of 2021 takes place at Symmons Plains, a circuit which opened in 1960, making for something of a repeat of history. 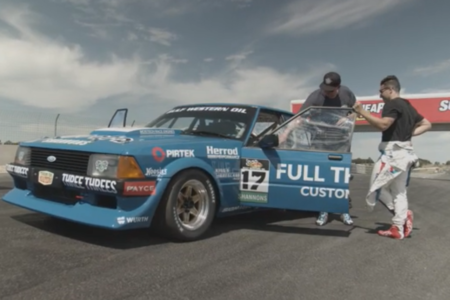 “Bringing Tru-Blu – Mark 3 – back to Symmons Plains…” noted Johnson in reference to the Falcons his father Dick drove.

Johnson has won the last three completed TCM series, in a 1969 Ford Mustang, but has not raced in 11 months as a result of the coronavirus.

“It’s great to be down in Tassie, to start early in the season,” he remarked.

“I think for us to be able to get out and about after a year of not really doing much, we’re all very, very excited to be here and just can’t wait to get underway.”

The Johnson XD is not the only highly anticipated car on the 14-strong entry list this weekend, with Gerard McLeod similarly giving his VB Commodore just its second round start.

TCM will be the first series to qualify at Boost Mobile Race Tasmania, tomorrow afternoon at Symmons Plains, before four races across the Monday and Australia Day Tuesday.