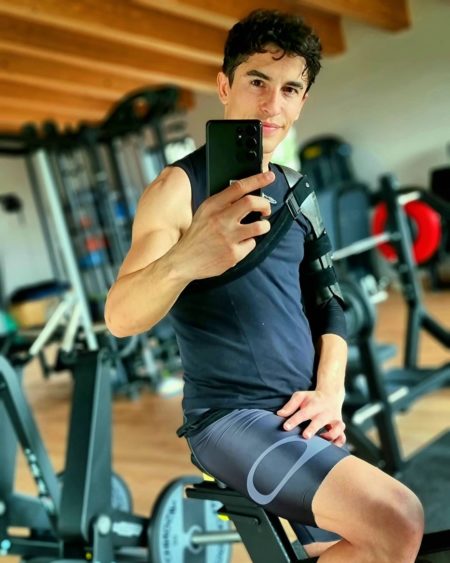 Marc Marquez is back in training following the third operation on his broken right arm.

The six-time premier class champion was most recently in for surgery on December 3, after which there was an extended silence from Honda.

That was until the six-week check-up, at which time it described its superstar’s progress as “satisfactory”, although no forecast of a return to a motorcycle was given.

Marquez has now taken to social media to show himself on an exercise bike with the caption “First day of indoor cycling”.

The 27-year-old’s right upper arm is supported by a bracing device which runs all the way from his elbow to the top of his shoulder, having had a case of pseudarthrosis (also known as a ‘non-union’ or ‘false joint’) confirmed.

There is no clear indication on when he might be able to compete again, with recovery timelines suggesting an absence of anywhere from the season-opener to the first six grands prix of 2021.

Stefan Bradl told Speedweek, in his native Germany, earlier this month that “common sense” suggests to him that he will ride instead of Marquez at least in the Official Test at Sepang in February, although that was subsequently shifted to Losail in early-March.

Bradl, a Honda Racing Corporation test rider, filled the breach for the balance of last year and completed a handful of laps on the 2021 RC213V at Jerez in the last two days.

Andrea Dovizioso, formerly of Repsol Honda and most recently of the Ducati Team before his current sabbatical from grand prix competition, has stated that he would consider a Marquez fill-in role if an offer came.