V8 touring car racing in New Zealand has been through a rocky road in recent years, but it’s hoped the arrival of TA2 will usher in a new era of trans-Tasman competition.

The New Zealand Touring Car Championship enjoyed healthy grids throughout the late 1990s and into the 2000s courtesy of its TL formula.

TL, or Trans-Am Lite, was a platform designed at the time to bear a similar resemblance to the then known V8 Supercars across the ditch at a fraction of the cost.

TL-specification Ford Falcons and Holden Commodores raced for over 15 years as the top touring car class in New Zealand before a shift towards a car that was closer to the then contemporary V8 Supercar of the 2010s.

However, a split within the NZV8s resulted in the formation of breakaway series; V8 SuperTourers.

Meanwhile, the Motorsport New Zealand sanctioned NZV8 championship forged ahead with its plans to build its own car, the locally built TLX.

A bitter feud followed that saw the V8 SuperTourers initially flourish with nearly 20 cars built by Pace Innovations out of Australia while NZV8s only built a handful of New Zealand-made cars.

V8 SuperTourers lasted a mere four seasons before the two factions cut their losses and merged to form what would be known as BNT V8s.

The series, which is split into two classes for V8 SuperTourers and TLX entries (Class 1) and older TL entries (Class 2) has consistently mustered fields just shy of 10 full-time entries in Class 1.

In the years since the merger, Class 1 cars have found their way into other all-comers-style categories and endurance series around the country. 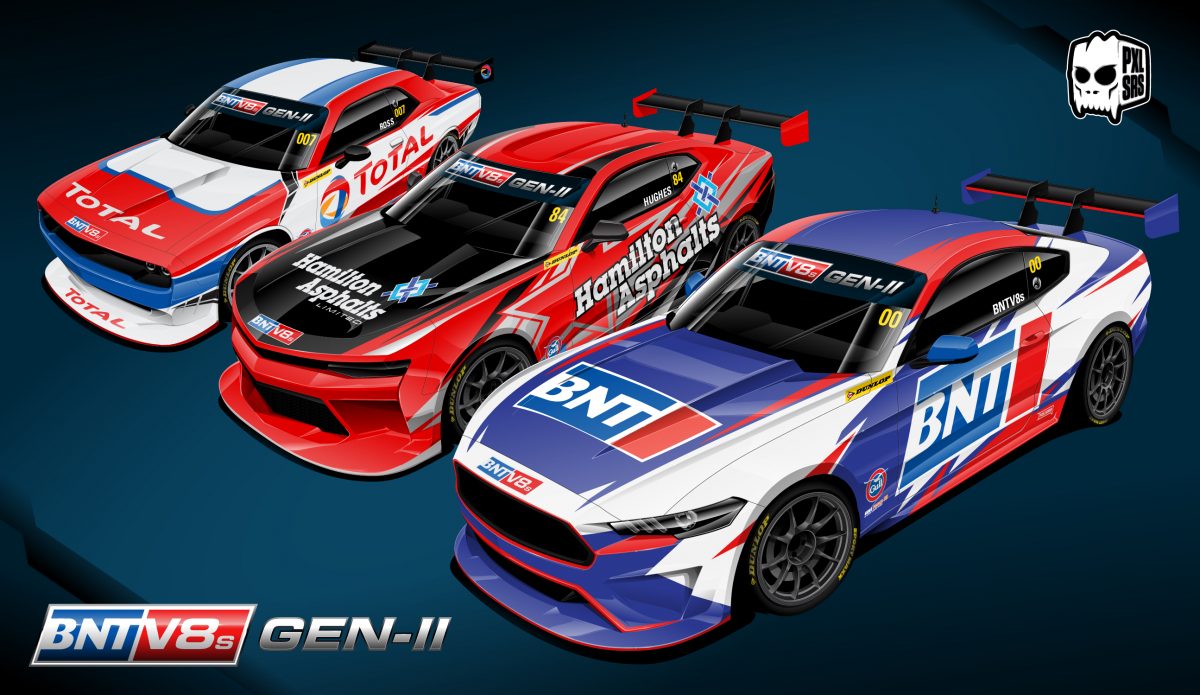 The Gen II concept that never came to fruition

In an effort to bring the championship back to its former glory, BNT V8s management launched its Gen II concept which was to be built locally by Mitchell Race Xtreme, the same group behind the TLX.

That concept never came to fruition, nor the Pace Innovations-designed V8GT concept that followed, both largely due to the cost associated and lack of interest from competitors.

Now organisers have steered away from a bespoke platform, instead opting for an established and cheaper set-up in TA2.

In years to come, it’s hoped TA2 competitors from New Zealand and Australia will go head-to-head on either side of the ditch.

The New Zealand category will be known as Trans-Tasman V8s once a changeover to the new platform comes.

“It was a sensible move to us to look at the TA2, simply because there’s over 40 of them currently in Australia,” Category Manager Gary Lathrope told Speedcafe.com.

“We want to get into a position where we can start seriously looking at some trans-Tasman challenges. So that’s pretty much the reason that we went down that particular track.

“We also felt it was good value for money for what you’re purchasing. Probably the key thing to us with those cars is just the cheapness of the running costs of them.

“That’s been the same in Australia, where that’s the popularity side of it over there, is just the cost of them is incredibly cheap to run.

“You don’t need a whole heap of engineers to run them, it’s just a simple car.”

The move hasn’t come without its hurdles, however. Organisers had hoped to launch the TA2 formula at Hampton Downs Motorsport Park midway through 2020, but those plans were kiboshed due to lockdowns as a result of COVID-19.

Before the pandemic struck, organisers were confident of a 12-car grid for the opening round of the 2020 season.

“The timing couldn’t have been worse,” Lathrope explained.

“We had a serious list of genuine buyers prior to lockdown. We had a 40 foot container that we bought over from Australia with four cars in it.

“We had everything sorted out, it arrived at Hampton Downs, we had it all unpacked ready for the grand display. Then when we got a 24-hour notice we were going into lockdown.

“Since then we tried again twice after that to do a release and every time we did a release there was a new lockdown.”

Lathrope is remaining optimistic despite a trying year trying to get TA2 racing off the round.

“We’ll keep persevering with the people who did show genuine interest and try and see what we can put across from there,” he said.

“Obviously it’s the age old story that everyone’s waiting for someone else to start buying them.

“I think once we get the first four or five cars underway the momentum will then push us through to the fans.” For the time being, the category has shifted towards a V8-based all-comers-style series.

Lathrope believes top-flight V8 racing can get back to the halcyon days with TA2.

Having seen the proliferation of TA2 racing in Australia, Lathrope is hopeful that a V8 renaissance may be possible.

“Ultimately, that would be fantastic,” he said.

“It’s happened in Australia, there’s no reason why it can’t happen here in New Zealand once we get that momentum going.

“We saw with V8 SuperTourers, when they got up to pretty much 20 cars, it got that momentum moving on that, and there’s no reason why this can’t do the same sort of thing.”