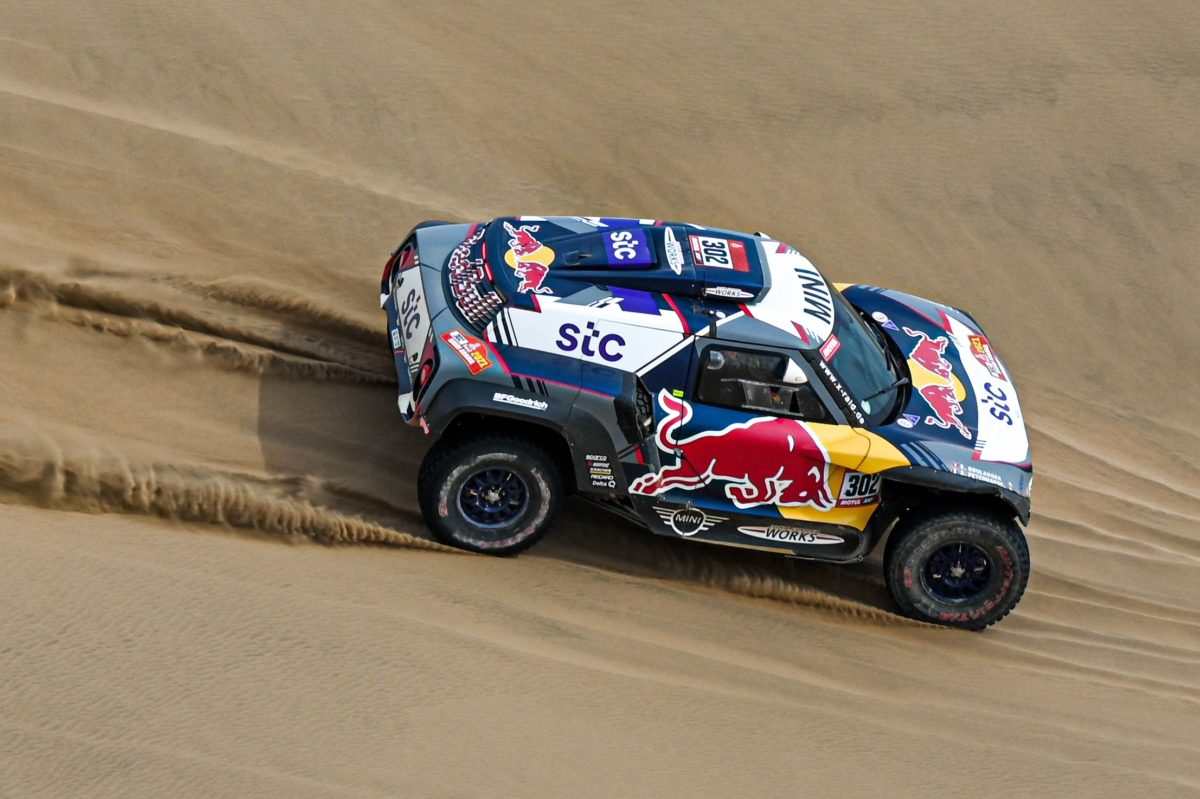 Stephane Peterhansel will take a slightly reduced 15-minute lead into the final day of this year’s Dakar Rally after finishing second on Stage 11.

Peterhansel reached the end of the shortened, 464km special with a time 1:56s slower than Nasser Al-Attiyah, but the X-Raid Mini driver still holds a 15:31s margin in the general classification.

Carlos Sainz remains third having collected the same position on the AlUla-to-Yanbu stage, and is now 1:04:50s behind his French team-mate in the rally.

It was either of the X-Raid buggies which led to Kilometre 306 before Sheikh Khalid Al Qassimi (Abu Dhabi Peugeot) moved ahead.

Peterhansel, who has 13 Dakar titles across two classes to his name, regained the ascendancy at Kilometre 404 but Al-Attiyah hit the front right at the end of the special.

While the damage on the leaderboard was relatively minimal, ‘Mr Dakar’ still had some nervous moments.

“Today it was really complicated, like the organisers said beforehand, like we expected it to be, because the navigation was not easy,” said Peterhansel.

“We got two punctures, especially the last one that was in the dunes.

“They were really strange dunes; in the middle of the dunes there were some rocks just after the crest of the dunes, so it was not easy to anticipate or to see.

“The last one was a very big impact and we had another puncture. We were a little bit afraid that also some part of the frame was broken, but at the end it was okay. We lost just a few minutes, it’s nothing.

“There’s only one day to go… it’s time to cross fingers and hope that we will be in first place at the end.”

Al-Attiyah, who now looks like having to wait at least another year for Dakar title number four, had punctures of his own and once again suggested that the buggies have an advantage.

“I don’t want to say anything, but I am really happy to be here on Day 11 without any technical problems with the car.

“It’s exactly like last year, we are really struggling with the tyres. I hope for next year there will be better rules for everybody.

“Sure, there’s still one day left, but this time we have really had a lot of punctures.

“I’ve had more than 16 tyres punctured [for the event]. I am sure that 16 tyres times one minute and a half each change is a lot.

“But it’s good to make it to here on this Dakar and we are quite happy. We’ll see what happens tomorrow.”

Al Qassimi lost his way late in the stage and only recorded the eighth-fastest time, 14:30s slower than Al-Attiyah’s.

Kamaz is on the verge of a fifth consecutive Dakar victory in the Trucks, a class which Dmitry Sotnikov leads by 40:42s.

Next in the general classification is Stage 11 winner Anton Shibalov, followed by yet another Kamaz driver in Airat Mardeev, while Big Shock Racing’s Martin Macik is 1:47:55s off the overall pace in fourth.

In Quads, Manuel Andujar (7240 Team) is also in a commanding position, over 25 minutes up on the field, after Alexandre Giroud (Team Giroud) went out with an engine problem having started the day second overall.

The 12th and final stage of Dakar 2021 takes the field back to Jeddah along a 200km special this afternoon (AEDT).