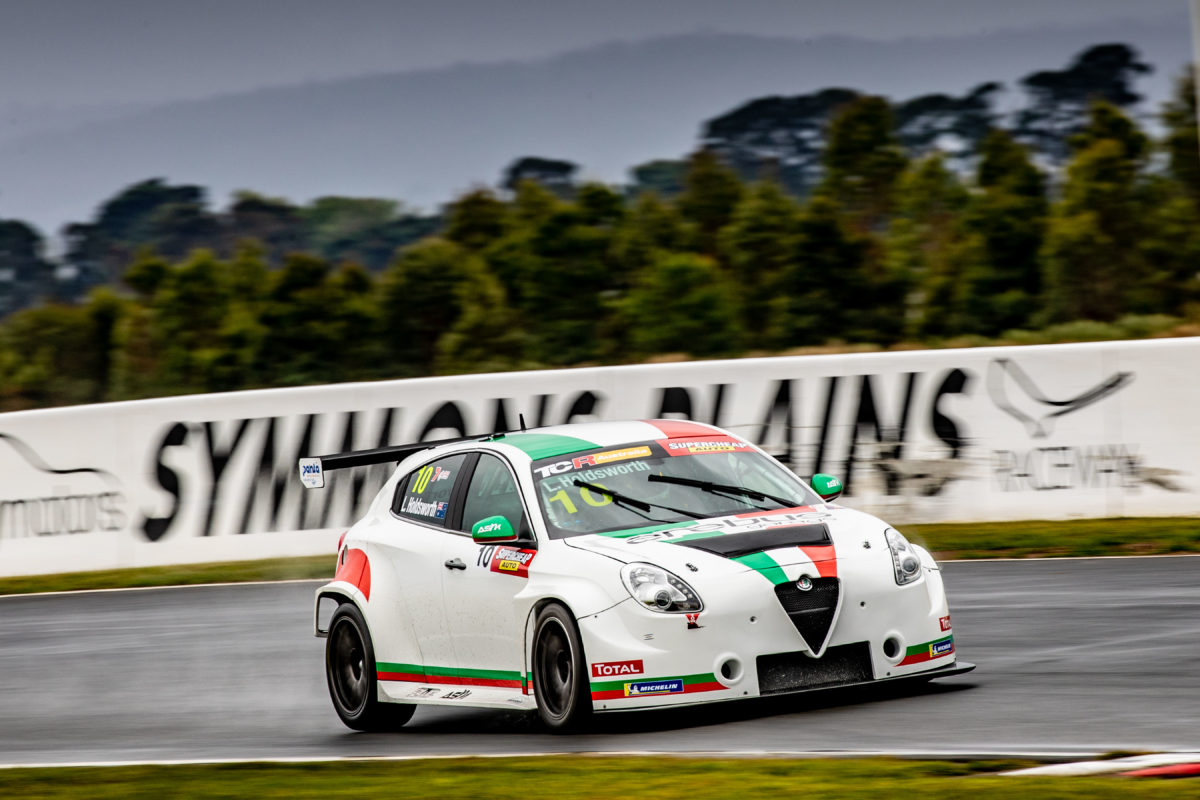 Lee Holdsworth has cut his first laps in his Alfa Romeo at Symmons Plains, ahead of next week’s Supercheap Auto TCR Australia Series opener.

Both the former Supercars full-timer and Ash Seward Motorsport team-mate Jay Hanson have had track time at the circuit which will host Round 1 from Sunday week as part of Boost Mobile Race Tasmania.

Holdsworth had not only the challenge of transferring from rear-wheel- to front-wheel-drive, but also doing so in wet conditions.

“The Alfa is really fun. I’m having a ball inside the car while I get my head around it,” he said of the turbocharged Giulietta Veloce.

“The differences between a Supercar and TCR car are pretty significant – going from rear-wheel-drive to front-wheel-drive.

“You can’t really influence the turn of the car with throttle like I’ve been used to. It’s a new challenge and a new way of thinking.

“The Alfa has amazing braking capabilities. It’s good fun with the paddle shift too, so I’m really enjoying it and becoming to get more comfortable, despite the weather.”

According to TCR Australia, as many as 20 cars could race at Symmons Plains, making for a high chance of congestion around the tight, 2.41km circuit.

“The hairpin can turn into a car park, and it is sometimes a lottery about which line to take.

“There are two genuine racing lines that you can take and run side-by-side with someone from entry to exit. The camber of the corner is unique and allows different options. It’s going to really suit these cars.

“The track itself is in good nick, so I’m looking forward to getting out here next weekend.

“There’s a lot of big name, profiled drivers joining which is huge too. It’s exactly why I chose TCR.

“Chaz [Mostert] is huge for the category and I think there’ll be some great racing and close competition. There’ll be a lot of people out there to win and hopefully we’ll be the mix.”

Practice will be held on Sunday, January 24, before qualifying and racing on Monday and the Australia Day Tuesday.

The latter two days will be broadcast on the Seven Network (including 7mate) and also streamed on 7plus.