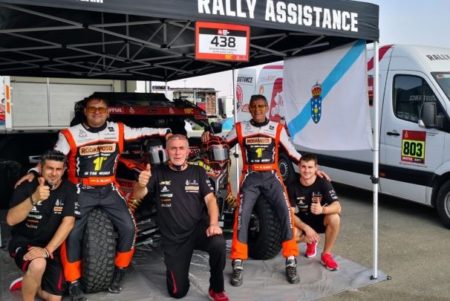 A side-by-side team had to pick up one of its co-drivers in the Saudi Arabian desert after a dispute in the cockpit during Stage 11.

Ricardo Ramilo and co-driver Xavier Blanco, entered in the Buggy Masters Team, parted ways 170km into the 464km special, with the former pressing on alone.

The two give different accounts as to whose decision it was to separate, and who was responsible for the spat, but in any event, crew members had to go and retrieve Blanco on stage.

Dakar organisers reported via live tracking, “Following a disagreement on the day’s special, Xavier Blanco, Ricardo Ramilo’s co-pilot, got out of the vehicle after 170 km and refused to get back in, with Ramilo deciding to carry on without him!

“Fortunately, the co-pilot was picked up by a member of the team and is safe and sound!”

According to Spanish sports newspaper AS, Blanco felt that Ramiro had been driving dangerously.

“My decision has been due to the behaviour of the pilot towards me,” he said.

“It was not the first time or the second, until I decided to get off when I see that my life is at risk and the pilot ignores.

“Next, what has done has been to abandon me, literally, I have abandoned myself in the middle of the desert.

“I did not want to go back up and he said, ‘There you stay’.

“In the team we have been putting up with this character for 15 days, if you have seen the videos you have been able to give an account of the level he has.”

Blanco was at least left with a small number of items in his possession, including the satellite phone which he used to call his team and ask to be rescued.

Team boss Eudald Noe and a mechanic were at the scene just over an hour later.

“He called us, gave us the location and I personally, together with another mechanic, went to get him to the track and we just arrived at the camp,” Noe told Marca.

“Xavi got off because he could see himself in danger, this man was driving very badly and he told him that he couldn’t leave that way.

“He got out and this man left him lying in the desert.”

Ramilo argues that he is in fact the victim.

The Dakar rookie cited the fact that he was not allowed to continue on his own, and also claimed that Blanco was left behind in a not especially remote location.

“It is not how Xavi tells it, firstly because it was not a desert,” Ramilo told another Spanish outlet, Deportes Cuatro.

“We had just left a control that is on the road and arrived at another which was also on the road, there was no desert.

“I’m left stranded, I have to continue without a telephone charging cable, without a satellite phone, without the cardboard to seal at the checkpoints and without being able to run because at the next checkpoint I find out that I can’t run alone.

“He left me, it’s the other way around.”

According to reports, there may have already existed ill-feeling between Ramilo and Blanco due to an incident earlier in the event.

Their Can-Am suffered mechanical problems on Stage 9, and Blanco is said to have convinced Ramilo to wave the white flag and transfer to the Dakar Experience classification.