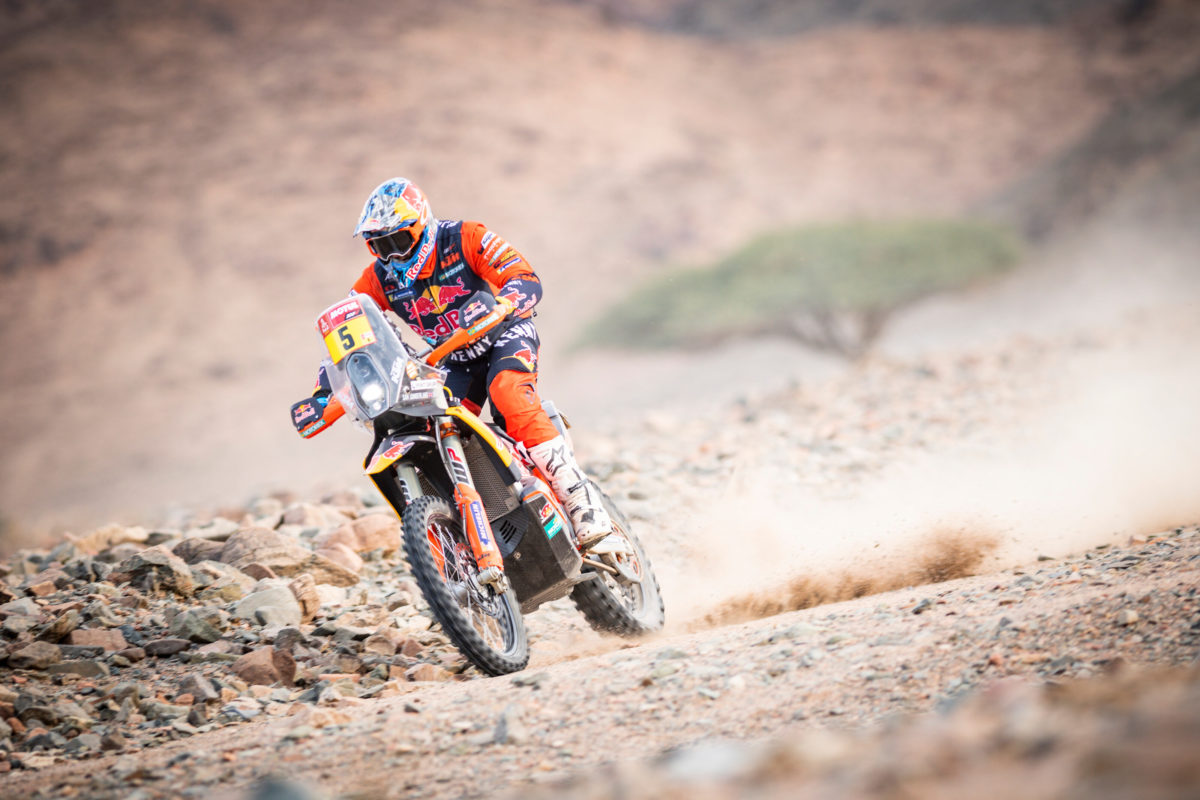 Sam Sunderland has moved to second overall in the Dakar Rally by winning the penultimate stage, but Kevin Benavides’ margin over the field has now grown to over four minutes.

Benavides and Honda team-mate Ricky Brabec began the day first and second in the Bikes classification, just 51 seconds apart, but Red Bull KTM’s Sunderland has now split them with his first stage win of this year’s event.

The Monster Energy Honda squad has also lost Joan Barreda Bort, who was fourth overall ahead of the 464km special from AlUla to Yanbu but ran out of fuel.

As such, the top three in the rally with a stage to go is Benavides by 4:12s over Sunderland, and Brabec 7:13s off the pace.

On yet another dramatic day, it was Pablo Quintanilla (Rockstar Energy Husqvarna) and Daniel Sanders (KTM Factory Team) who duelled for the lead in the early stages.

Barreda Bort jumped to a seven-minute advantage at Kilometre 215, only for it to be discovered that the Spaniard did not complete his compulsory refuelling.

Had he been able to make the finish, a sizeable penalty would have applied anyway, but Barreda Bort’s Honda ran dry after 267km and he was airlifted to the bivouac.

The mishap meant that Sunderland already had the effective lead at Kilometre 215 and he gradually pulled clear of Quintanilla.

The latter gained more than a minute in the last 26km of the special but still came up 2:40s of KTM’s leading man at the finish line.

Benavides dropped as far as 9:50s off Sunderland’s pace, at the last waypoint before the finish line, but found crucial minutes in the last few kilometres to cut the deficit to 6:24s as he finished third on stage.

Sanders eventually got home fourth for the day, 8:34s from first position, and has risen to fourth in the general classification, 33:05s off top spot.

Brabec hit some navigational trouble midway through the special and ended up with the fifth-fastest stage time, giving up 6:22s to Benavides.

The American’s odds of going back-to-back at the Dakar have therefore lengthened ahead of the final day, which sees a 452km journey from Yanbu to Jeddah include 225km of special stage running.

Skyler Howes (BAS Dakar KTM) rounds out the overall top five but, having only set the 12-fastest stage time, has gone from just ahead of Sanders to over 16 minutes behind in the event classification.