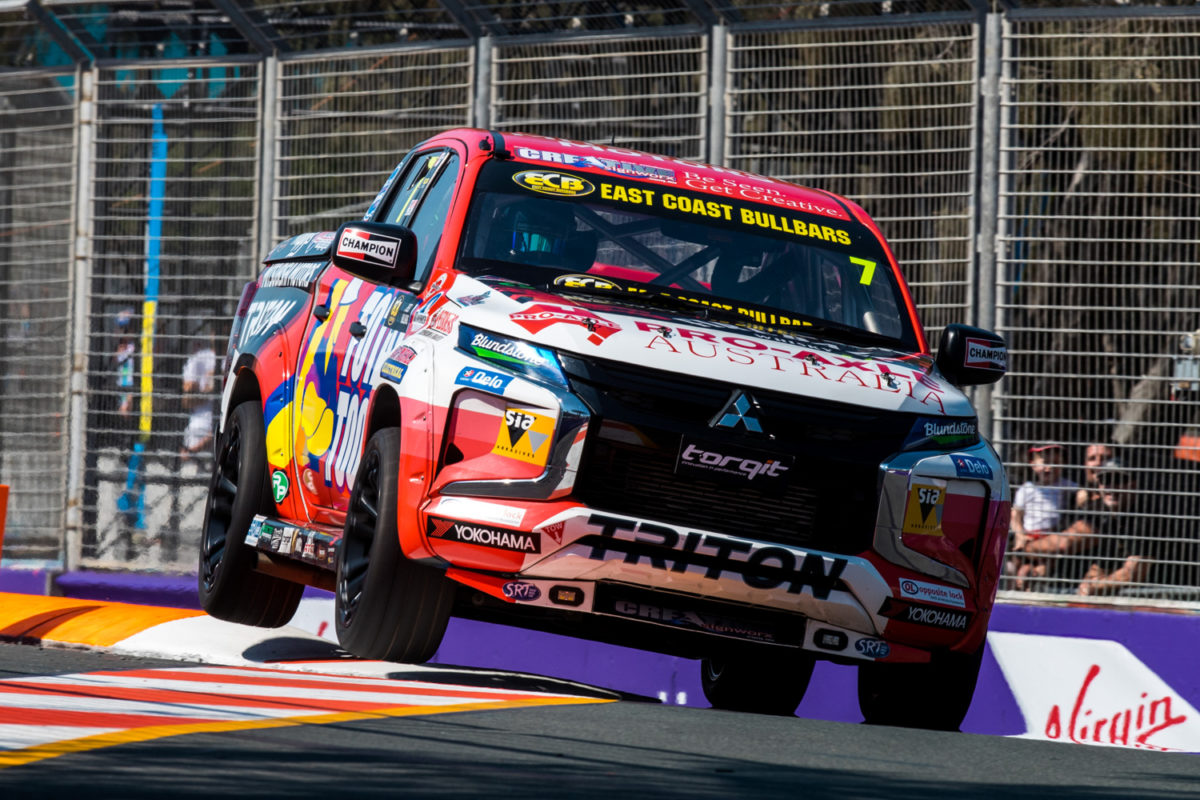 The field for the V8 rebirth of SuperUtes is taking shape with work ongoing on one new vehicle and the build of another to begin soon.

Assuming all existing vehicles hit the race track, which appears likely, the new examples would take the grid to 16 for the start of the 2021 season.

Of the two extras, one is a Holden Colorado which Steve Southgate will finally race, having been spoken of as a potential entrant several times during the diesel seasons but generally hindered by business commitments.

The other is a brand-new Mitsubishi Triton set to be steered by Gerard Maggs, who already has SuperUtes miles under his built from two round starts in 2019.

Southgate’s will, of course, have to be converted to accommodate the new LS3 V8 engine which all SuperUtes will race with from this year.

“I got a kit sent to Steve Southgate just before Christmas as well,” said V8 SuperUtes project leader Luke Sieders.

“There was that brand-new Colorado that had never raced, so he’s got a kit going together with that.”

In addition to Gerard Maggs, his son Jaiden will drive a Triton, as will Sieders Racing Team (SRT) regulars Cameron Crick and Craig Dontas.

“He’s going to get involved in the series so he wants a car built for himself but his son Jaiden is going to drive one of our other existing Mitsubishis.”

In other movements, George Gutierrez has bought the Team 18 Colorado, Craig Jenner has acquired the formerly Michael Cameron-owned Mazda BT-50 which Aaron Cameron raced, and Peters Motorsport is set to install an LS3 and race the BT-50 which was fitted with the LS1 for development purposes.

SRT has one of the four Toyota Hiluxes on its way to engine management specialist Haltech this week and is also set to start work converting a second Triton.

In total, Sieders expects around eight SuperUtes to have been converted to V8s in coming weeks.

“I reckon by end of the month, early next month, I’ll have four up and running and there’ll probably be another three or four around the country up and running as well,” he said.

SRT will also continue the partnership it has had with Western Sydney Motorsport, the team owned by Aussie Racing Cars regular Craig Thompson, with most seats in the aforementioned Hiluxes already spoken for.

“At the moment, I think we’ve pretty-well got three of them filled and we’re talking to a couple of other people about the fourth one,” explained Sieders.

“There’s [also] people interested in buying cars and stuff like that at the moment, so it’s all trucking along nicely.

“There are two people that I’m talking to about two other builds, which would be two other makes, but that hasn’t been confirmed just yet.

“We’re still trying to piece that puzzle together, but I’ve been talking to PACE Innovations and they’re all still behind us and keen to build the chassis and supply the component kits for them, so it’s all very positive.”

A provisional, five-round calendar was released late last year, with the series set to kick off in support of the Supercars Championship at The Bend on May 7-8.