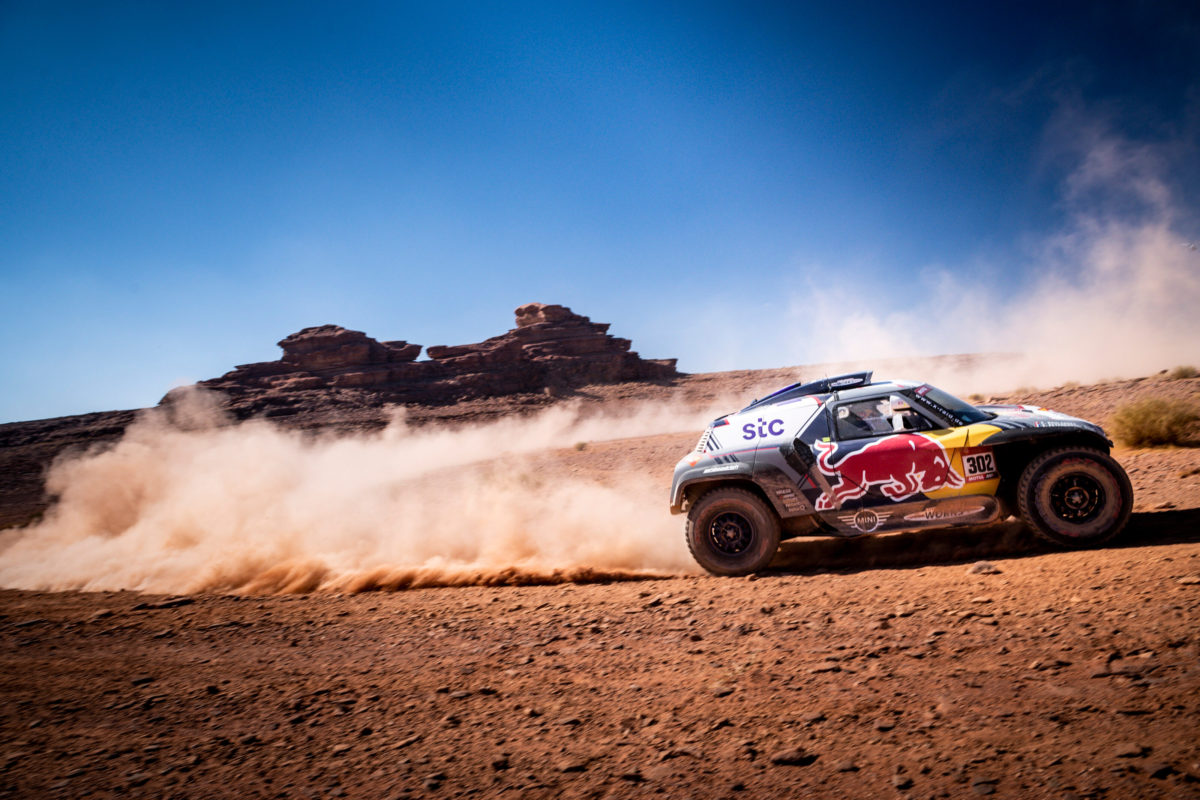 Stephane Peterhansel has increased his lead in the Dakar Rally by winning Stage 9 by exactly 12 minutes.

With three stages remaining, the 13-time Dakar champion is now 17:50s up on his nearest rival, Nasser Al-Attiyah, who was also second-quickest on the 465km loop around Neom.

While Peterhansel led for most of the way in his X-Raid Mini JCW buggy, Al-Attiyah was quickest to the first waypoint and remained within a minute of the benchmark pace all the way to Kilometre 121.

The Qatari lost almost five minutes to the next waypoint, and again to Kilometre 271, before explaining at the finish that he ran out of tyres due to the #301 Toyota Gazoo Hilux picking up three punctures.

“The navigation was no problem, but we had three flat tyres, three punctures and we didn’t have any spare wheels, so we decided to just to get to the finish and Stephane passed us,” said Al-Attiyah.

“It was not easy for us today but what can we do? We can’t change anything with the tyres.

“That’s life, I’m not disappointed. What can I do? I have done my best and I’m here at the finishing line.

“Still, everything is possible.”

Peterhansel’s team-mate, Carlos Sainz, suffered two punctures on his way to the 11th-fastest stage time and is now just over an hour adrift in the general classification.

Said ‘Mr Dakar’ after what could be a pivotal day in his pursuit of a 14th title, “For sure this stage was a really complicated one.

“From the beginning we saw that the day would be long, so we decided to not be on full attack but more to manage the tyres and be clean with the navigation.

“At the end we overtook Carlos and also Nasser. We overtook him two times because he had a puncture.

“It was a real Dakar stage, a little bit like in the past in Africa, where it was not only a question of speed but it was also a question of strategy, just to adapt the speed to the condition of the tracks.

“For sure, normally in such conditions I was always not so bad, so it’s still good for me.”

Once again, Jakub Przygonski (Orlen Hilux Overdrive) and Nani Roma (Bahrain Raid Xtreme) ended the day fourth and fifth respectively in the general classification, although both are now well over two hours off the pace.

Giniel de Villiers, in another factory Hilux, was third-quickest on the stage and remains ninth overall.

Mathieu Serradori (SRT Century) challenged for the stage win, leading at Kilometres 320 and 354, but subsequently broke down and gave up over half an hour.

It is still Dmitry Sotnikov, however, comfortably leading in an all-Kamaz top three in the general classification.

The Chilean won the stage and is now 12:25s up on Austin Jones (Monster Energy Can-Am), who dropped over half an hour.

Stage 10 runs from Neom to AlUla, with a total of 583km of running including a 342km special.