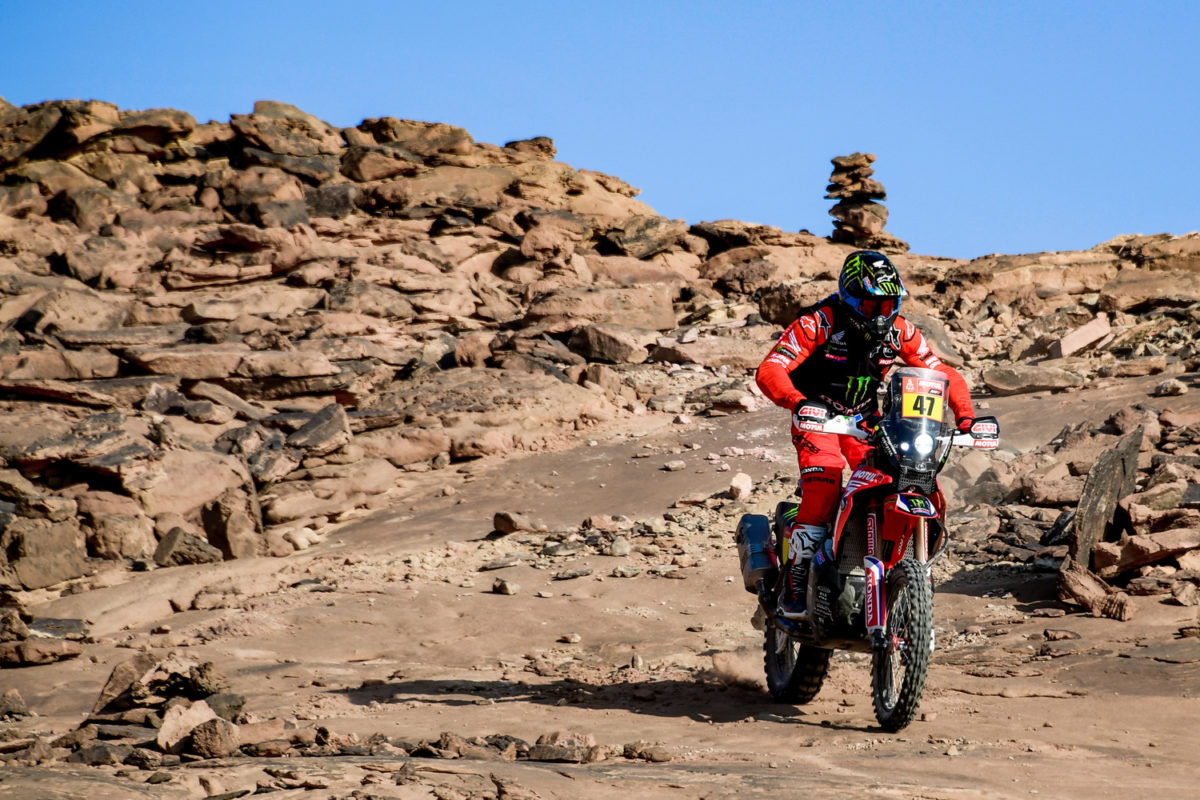 Kevin Benavides has hit the front of Dakar 2021 in the Bikes while erstwhile leader Jose Ignacio Cornejo Florimo has withdrawn after a crash on Stage 10.

The Chilean is the second big name to go out in as many days after Toby Price, who started Stage 9 second overall, broke his collarbone.

Cornejo went down 252km into the special between Neom and AlUla but was able to remount and complete the 90km which remained.

However, organisers reported that he was “not feeling well” and a medical examination after the stage finish has seen him ruled out of the rest of the rally.

‘Nacho’ had started the day 11:24s up on the field, led at Kilometre 90, and was a touch over a minute behind Monster Energy Honda team-mate Ricky Brabec at the waypoint just prior to his incident.

Brabec went on to win the stage and, having been as far as 25:09s adrift in the general classification, has surged back to second position overall, just 51 seconds off Benavides.

Cornejo holds the third-fastest overall time, only 16 more seconds behind, but that point has become moot with his retirement.

Further consolation for the factory Honda squad, however, was its sweep of the top three on the stage.

Brabec took the lead in the mountains, at Kilometre 126, and held it all the way while Joan Barreda Bort made the finish with a time 3:15s slower.

Benavides gave up around five minutes between Kilometres 45 and 90, but little more for the rest of the stage, and his third placing on the day was enough to grab the overall lead.

Red Bull KTM’s best positioned rider is again Sam Sunderland, who is effectively third overall in light of Cornejo’s withdrawal but failed to fully capitalise on the Chilean’s misfortune and is still 10:36s off the event pace.

Barreda Bort is next in the general classification in fifth, officially, one spot up on BAS Dakar’s Skyler Howes.

The latter was KTM’s fastest rider on Stage 10, grabbing the fourth-fastest time at 5:48s behind Brabec.

Fellow Australian Michael Burgess (BAS Dakar KTM) is currently showing 30th overall at the conclusion of the stage, while Andrew Houlihan (Nomadas Adventure) is still coming to the finish.

The penultimate special, which takes up 511km of a total 557km stage, runs between AlUla and Yanbu.