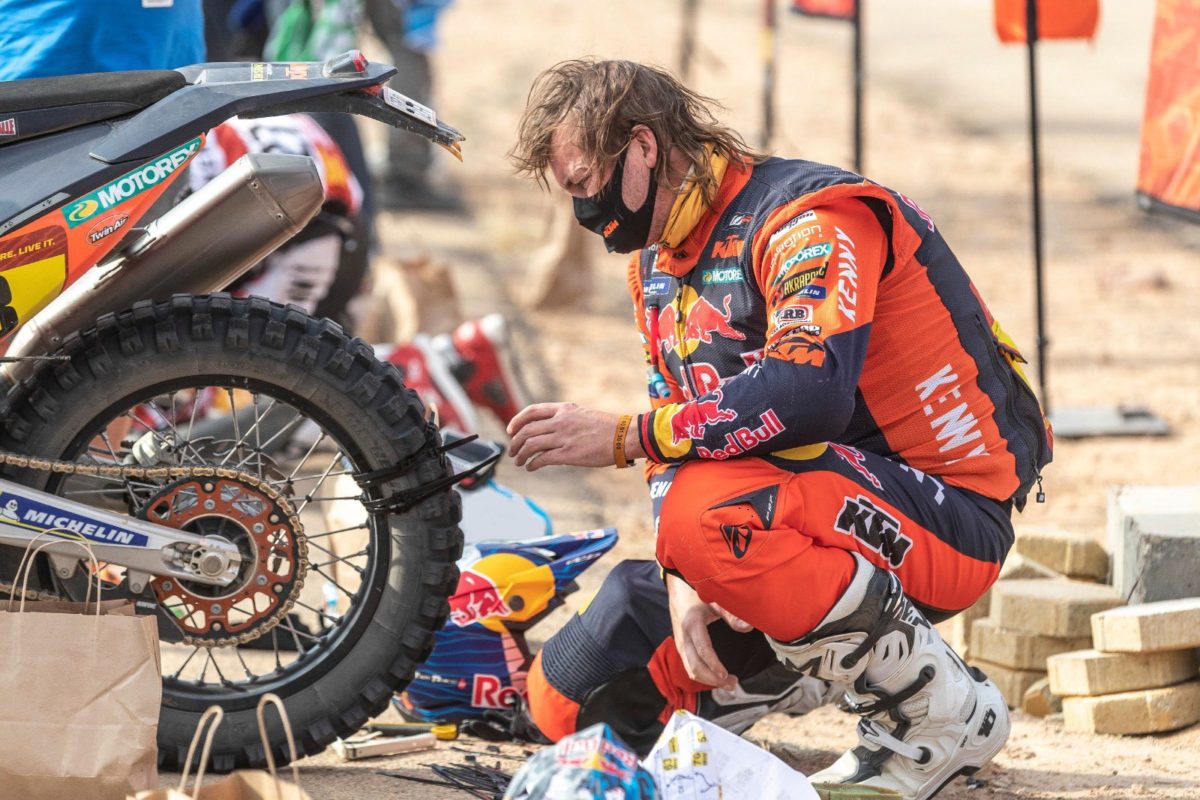 Toby Price is glad to have finished Stage 8 of the Dakar on a crudely patched-up tyre which had been ripped a day prior by a rock.

The Red Bull KTM rider managed to take second on what was a 709 km stage, including a 375 km special, losing only 1:05s to overall leader Jose Ignacio Cornejo Florimo.

Those two were split by just a second in the general classification after Stage 7, the first part of the ‘marathon stage’ during which competitors cannot receive assistance except from each other.

However, that does not extend to swapping tyres, as Price might have done with a team-mate or a rider from the sister Rockstar Energy Husqvarna Team as was the case during Dakar 2020.

Instead of copping the 30-minute penalty for such a change, the two-time champion took to wrapping the gash in the tyre with tape and cable ties.

Cross your fingers and toes for me today guys… the bush mechanic is back in action! 🤞🇦🇺
🎥 @redbullmotors #Dakar2021 pic.twitter.com/yghif7TWWe

It held up well enough for him to lead for much of the special between Sakaka and Neom, and make the finish line slower than only Cornejo.

“It’s been a really tough couple of days for me,” said Price.

“I damaged my tyre yesterday and of course, not being allowed to change it, I had to repair it as best I could for today and hope it held up.

“I rode a good stage, but all the while I was trying to be as smooth as possible – not accelerate too hard in case the issue got worse.

“Second on the day is not bad at all, I lost a little more time to the rally leader, but I’m just glad I got to the finish line.”

Compatriot and fellow factory KTM rider Daniel Sunderland battled on Stage 8 after his crash a day earlier but still finished seventh on the special.

With Xavier de Soultrait crashing out of the event, Sanders moved up one spot to eighth in the general classification, 22:40s off the lead.

“I struggled to focus a little today, I think I was a little tired from yesterday and the crash I had,” admitted the rookie.

“Thankfully I didn’t have any major problems, I just tried to put in a solid ride through the stage.

“I’m glad I’m here at the finish near enough in one piece.

“Both me and the bike have certainly had a tough couple of days, but we’ll get fixed up now and look ahead to the rest of the race.”