Cornejo edges further ahead of Price on Dakar Stage 8

Cornejo edges further ahead of Price on Dakar Stage 8 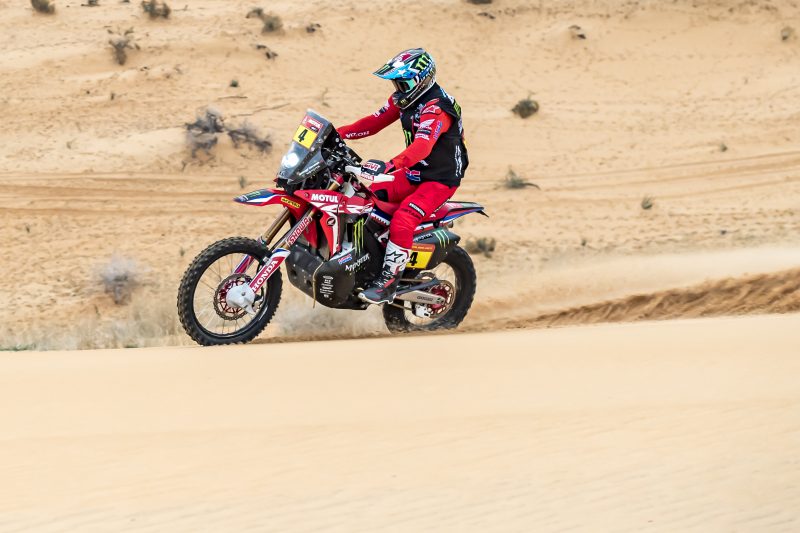 Jose Ignacio Cornejo Florimo has put slightly more distance between himself and Toby Price in Dakar’s overall Bikes classification after they finished first and second respectively on Stage 8.

The Chilean had started the day one second up on the Australian and won the 375km special between Sakaka and Neom by 1:05s.

Despite being forced to leave the bivouac with a rear tyre held together with tape and cable ties for what was the second marathon stage, Price in fact led for most of the way to Kilometre 266 on his Red Bull KTM.

It was Cornejo, on a Monster Energy Honda, who would then hit the front for the first time, and stay there.

Their efforts meant that 2020 champion Ricky Brabec, on another Monster Energy Honda, lost another 2:50s relative to the overall lead despite backing up from his stage win on the preceding day with a third placing on Stage 8.

Said Cornejo, “With four days to go the plan is the same as it is now: try to ride as fast as we can, don’t get lost, don’t crash and take care of the bike.

“I think that if we keep the same focus that I’ve been bringing on this race or on this last couple of days, I can do pretty good.

“We’re very focused, but now is the time to rest and think about tomorrow’s stage.”

For the second day in a row, Red Bull KTM’s Sam Sunderland wound up fourth-fastest on stage and third overall, now 5:57s behind Cornejo for the event.

Brabec has improved his overall position to sixth, but his deficit sits at 17:42s.

KTM Factory Team’s Daniel Sanders improved one position to eighth in the general classification, 22:40s from the lead, after setting the seventh-fastest stage time.

HT Rally Raid Husqvarna’s Xavier de Soultrait started the day fourth overall but is now out of the rally after a crash 267km into the special.

The Frenchman did not lose consciousness but was airlifted to hospital for x-rays.